The film’s basic plotline is the usual one that readers of Wonder Woman’s origin story would expect. While Diana trains to be a great Amazon warrior on Themyscira, one day Steve Trevor crashes on their island, alerting the Amazons to a war going on in the outside world. Diana sneaks off the island with Steve to fight in World War I, which she believes is caused by the god Ares, and ends up saving the world. That’s everything boiled down to the basics, and if you knew anything about Wonder Woman going into the movie, then it is probably what you expected. Despite its predictability, the plot itself is still amazing and all the character development and commentary that is interwoven with this plot is what really makes the story of one of the greatest female superheroes shine. 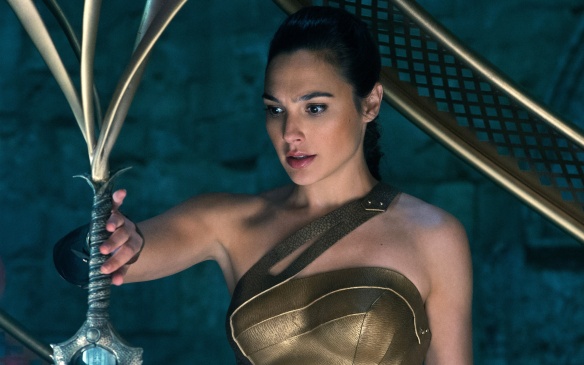 For the most part, Wonder Woman’s diversity was pretty good, which I didn’t expect would be something that I would say. We have two excellent characters of color, Sameer and The Chief. Sameer is a spy and conman who is friends with Steve Trevor. Sameer speaks several languages and is an amazing actor. He adds a certain charm to the movie as one of the more personable members of Steve’s trusted crew. Sameer confesses to Diana that he always wanted to be an actor, but no one would hire him, causing Sameer to turn his acting talents elsewhere as a spy and conman. The Chief was one of my favorite characters, though admittedly I was annoyed we never learn his actual name. The Chief is a Native American who is a smuggler and trades to both sides of the war; he meets with the group because he knows how to sneak people around the war front. Diana accuses him of having no honor if he doesn’t pick a side. He explains to her that the last time his people fought in a war they suffered a devastating loss, but out on the frontlines he feels free. Diana asks him who harmed his people, and The Chief gestures to a sleeping Steve and says “his people.” This is an extremely important moment because it actually addresses white Americans’ role in the cultural genocide of the Native Americans, which is rare for Hollywood.

One of the great things about both these characters is how they explain what prejudice is to Wonder Woman. The movie does not ignore the fact that Diana is a beautiful white woman from Themyscira. She doesn’t know anything about racism, sexism, or homophobia in our world. And while Diana does experience prejudice for being a woman, since she is white, she wouldn’t know what people of color face even after she is exposed to our world. It’s important to have characters like The Chief and Sameer give her a first-hand perspective on what they have suffered and how they attempt to deal with it. That being said, Wonder Woman never acts as the white savior to any of these characters. She fights by their side and supports them but never claims she has the power to save them from these prejudices. This is also important because Diana looks down on these characters at first, viewing them as being bad people in her very black-and-white mindset, but as she hears their stories and learns what they deal with, she comes to a better understanding of both the world and them as people.

I’m happy to say that there are also numerous women of color on Themyscira who were portrayed as amazing warriors and leaders. Sadly, though, these women only had minor speaking parts and didn’t feature much in the movie. Other than these women, there were no women of color prominently featured in the film, which is something that certainly needs to be corrected in the following films. But considering how past renditions of the Amazons portrayed them almost entirely as white, this is a small but important step in the right direction.

Steve’s group also includes Charlie, a Scottish sniper who struggles with PTSD from the first tour of duty he did during the war. Charlie is another person whom Diana, at first, does not understand. She doesn’t understand his PTSD and how to handle it. When she tries to comfort him, Charlie views it as pity and pushes her away. Sameer explains to her what Charlie is going through and when Diana eventually learns that Charlie likes to sing, she decides to reach out to Charlie with music. I hope, though, that Diana just didn’t understand how to handle Charlie’s PTSD because she didn’t know anyone who was getting over a recent traumatic event on Themyscira. It would be really shady if we found out Diana never knew anyone with mental disorders or disabilities on Themyscira, because that would suggest some kind of magical cure-all which nobody wants.

Sadly, this movie didn’t have any outward queerness but had some hints at it that are even more obvious than the ones in Deadpool. Antiope, Wonder Woman’s aunt and the general of the Amazons, seems to be in a same-sex relationship, though I could be reading into that. During the movie Antiope is often accompanied by Menalippe, her lieutenant, and after Antiope is killed Menalippe seems particularly heartbroken, as if they were more than friends or a general and lieutenant. But the most telling part of the Amazons’ potential queerness is when Diana explains to Steve that she has read documents on sex and he wouldn’t like them, because they detail how men are necessary for procreation, but not for pleasure. This would mean that either the women are in same-sex relationships, or that they all enjoy healthy masturbation, or both. Hopefully openly queer characters will be revealed in the future and Diana’s own bisexuality will be explored in the movies, especially considering that Diana is now canonically bisexual in the comics.

It’s hard for this movie not to be feminist just by virtue of who this movie is about. Beyond the above points, the movie also has body positivity, and the only one who is ever shown nude is Steve Trevor, not Diana or any of the Amazons. Diana is defiant when the men try to keep her out of certain situations and just does what she damn well wants anyway. There was never a time during this movie where I felt any of the male characters outshone her. Furthermore, I was pleased that while Diana was a fish out of water and Steve did help her adjust, I never felt like Steve was teaching Diana or training her or something. He was a guide, a lover, and a friend, and thankfully not a master or teacher.

Finally there is my only real major critique of this movie and that’s the mythology. Maybe it’s just me, because others have fought with me on this point, but I love Wonder Woman the most when she is dealing with mythical Greek characters. And while Wonder Woman’s primary villain this movie was Ares, as it should be, I was a bit annoyed that the movie explained that all the gods except for Ares are dead. First off, Ares wouldn’t be able to challenge all of the gods and defeat almost all of them. Just, no. Secondly, with the other gods dead, that means that we might not get any more awesome Greek mythology in this movie series (assuming there will be more Wonder Woman movies) and that just makes me super sad. There were some hints that maybe the gods weren’t as dead as the Amazons thought. When Diana leaves Themyscira, she goes to grab the god-killer sword and, for a brief moment, we see a bull before Diana climbs the building. The bull was a symbol for Zeus, so perhaps Zeus is showing his approval and lending his aid to Diana. Then there is the party scene where Diana steals a socialite woman’s dress so that she can sneak in. The socialite woman’s hair is adorned with peacock feathers; peacocks are also a symbol of Hera, so again maybe Diana is receiving some sort of aid or favor here. I certainly hope that is the case, because otherwise I don’t understand why it’s so important to point out that Diana is the daughter of Zeus. Is her status as demi-goddess really going to be reduced only to an explanation for her powers?

But honestly, I was super annoyed that the Amazons seemed to focus their worship on Zeus. It was Zeus who protected Themyscira, stopped Ares, and gave them the god-killer, and we see the Amazons praise him in the movie. However, in all previous incarnations of Wonder Woman that I am aware of, the Amazons always primarily followed a female goddess. In some versions it’s Hera, Athena, or Artemis, but it’s always a woman. The Amazons respect all of the gods, but their main devotion is to a female deity. With all the patriarchy that we see in mainstream religion, I was really looking forward to see a group of women celebrating a goddess, but I guess it was not to be.

Overall, I would say that this is the best superhero movie that I have seen in a really long time. This restores at least some of my hope in the DC movie franchise, but more importantly, it gives me hope that there will be more well-done female superheroes gracing our screens soon. Considering the overwhelmingly positive responses and ratings the movie is getting, I think the future of female superhero movies is looking pretty good.