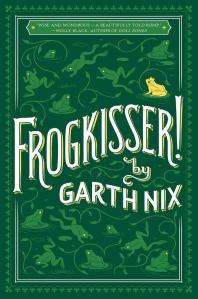 I’ve been a fan of Garth Nix for a long time, as you may know if you’ve followed my Old Kingdom ramblings on this blog for a while. However, I was a little disappointed by one of his more recent children’s offerings, Newt’s Emerald, and only picked up his latest, Frogkisser!, with some trepidation. I needn’t have worried. Frogkisser! ended up being a humorous, sometimes-satirical take on The Frog Prince, and had all of my favorite things — badass women of color, a rambunctious talking puppy, and absolutely zero romance for the fairy tale princess. But surprisingly, unlike other revisionist fairy tales, it reclaims some of the spirit of the original fairy tale, while subverting some, though not all, of what we believe The Frog Prince to be about today.

In our cultural narrative, we generally have the idea that Frog Prince-related stories all have a princess who falls in love with a frog and kisses it to turn it back into a prince. The 1986 film The Frog Prince is about a cursed prince who’s freed by a kiss from a princess who’s fallen in love with him, and the 2001 film Prince Charming is about a cursed prince who regains his human form after being kissed by a human woman who loves him; there’s even a Muppet film about a cursed prince in frog form which follows largely the same plot beats, both princess- and kiss-wise. But you might not have known that the kiss in The Frog Prince was nowhere to be seen in the original version, and was only added far later due to a potential mistranslation of the original text. In the Grimm brothers’ 1812 version, The Frog King, the transformative moment went like this:

There was no helping it; she had to do what her father wanted, but in her heart she was bitterly angry. She picked up the frog with two fingers, carried him to her room, and climbed into bed, but instead of laying him next to herself, she threw him bang! against the wall.

“Now you will leave me in peace, you disgusting frog!”

But when the frog came down onto the bed, he was a handsome young prince, and he was her dear companion, and she held him in esteem as she had promised, and they fell asleep together with pleasure.

In fact, the moral of the original story was that children should keep their promises and follow their parents’ orders. True love’s transformative kiss didn’t enter the tale until it was translated into English in the 19th century, and it’s subsequently become an indelible part of our own cultural lexicon. “You have to kiss a lot of frogs before you find your prince” was even a common saying in the 1970s as a way of saying that women generally had to go through a lot of unpleasant men to find The One. Nowadays, despite the original text, the story of The Frog Prince is generally understood to be one in which a princess falls in love with and kisses a frog in order to turn him back into a prince. The magical means by which she accomplishes this are unclear, but the story now relies on the equation of “True Love’s Kiss + Princess”; that is to say, the trope of True Love’s Kiss and the princess’s own status as a princess.

The fascinating thing about Frogkisser! is the way that it turns the True Love tenet of “True Love’s Kiss + Princess” on its head. In Frogkisser!, Princess Anya is the youngest princess of Trallonia, and as the youngest, all she wants to do is stay in her library and read about sorcerers. However, her bookish peace is shattered by her older sister and presumptive heir to the throne, Morven. Princess Morven, a flighty girl with dozens of suitors, has had her latest suitor turned into a frog by the girls’ stepstepfather (not a typo), the evil sorcerer Duke Rikard. The frog then hops out the window, and Morven is too distraught to go find the frog herself, so Anya promises to find it and bring it back for Morven to kiss. Yet when she does find the frog and takes it to her sister, Morven refuses to touch it. Anya then goes to the castle wizard, who tells her that there’s a lip balm that can allow almost anyone to kiss a transformed creature and turn them back to their original forms, without any of that pesky true love business. So Anya, very reluctantly, sets out on a Quest to find the ingredients for this lip balm so she can kiss the frog and get back to her library. 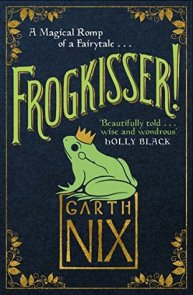 Did you want an even bigger frog on the cover? Here you go! (via Goodreads)

Frogkisser!‘s lip balm thus stands to bypass both requirements of “true love” and “being a princess”. Princess Anya doesn’t go into this Quest just because she’s a princess and she’s the only one who can do it. She goes reluctantly, because she wants to fulfill a promise to her sister, and as she travels, she slowly learns that long before the Duke took over Trallonia, it had been part of a larger kingdom called the High Kingdom, which was governed by the All-Encompassing Bill of Rights and Wrongs. This Bill was carved onto the Only Stone, which was then stolen by sorcerers associated with Duke Rikard, and the Duke has been mistreating his people ever since. When Anya saves the frog and is finally convinced that there should be a ruler who is willing to follow the Bill of Rights and Wrongs, like herself, she’s fulfilling both her promise to her sister and a promise to the kingdom at large. In many ways, it’s closer to the original morals of the original fairy tale than many other retellings have been.

Futhermore, Nix turns the act of kissing frogs into an act of supreme agency. No longer is the kiss a reluctant favor that a princess grants to a prince (or worse, is coerced into giving), in Nix’s narrative, the kiss is a weapon to be used against the evil Duke Rikard. Over the years, and unbeknownst to Anya, Rikard and his fellow sorcerers have transformed everyone who’s tried to oppose them (and some whom they just didn’t like) into frogs. Anya finds all of said frogs while she’s collecting the ingredients for the lip balm, and when the lip balm is created, she kisses each and every one of them. In so doing, she saves her kingdom — she’s no longer a young princess with no allies, she’s now a princess with an army of knights, princes, princesses, soldiers, and even unicorns, all of whom have a serious grudge against Rikard and a built-in debt to Anya, and they easily defeat Rikard.

However, though Frogkisser! thankfully eliminates all romance from its narrative, it still doesn’t address the idea that the curse must be broken by a kiss from a princess. Anya’s told that the lip balm will work for almost anyone, but that it will work better for princesses, for reasons that aren’t ever explained. When the lip balm is created, Anya and another princess are the only ones to ever use it, thus denying the story a chance to really subvert the latter half of the “True Love’s Kiss + Princess” pattern. Though the story fully negates the tired True Love’s Kiss trope, it leaves the princess trope up for interpretation and  doesn’t fully interrogate it. In order to really make a fairy tale into a modern, revisionist fairy tale, a Frog Prince retelling would have to address both parts of the romantic fable we’ve turned the original tale into. Why should a transformative curse need to be broken only by a person who was born into a position of privilege? Hopefully other Frog Prince retellings, like this upcoming one from the Tyme series’s Megan Morrison, will continue to further address these ingrained tropes in our cultural narrative. But until then, Nix’s Frogkisser! is a delightfully magical fairy tale with which to spend a few summer days.