Our society has a poor relationship with gender, which is bad for reality, but gets interesting in fiction. This dynamic is pushed to some possible conclusion in works such as The Handmaid’s Tale, Bitch Planet, or Stepford Wives. In these stories, the degrading treatment of women in the present day becomes far more explicit and sinister. We aren’t just looking at microaggressions and lower pay, but being forced into servitude or stripped of all agency. Stories like these are both good cautionary tales and thought experiments, and they can more easily highlight some of the harder-to-see marginalizations women face. But sometimes, an author wants to shock the audience by flipping the gendered treatment of the characters. In some stories, we get to see matriarchal societies and how they tend to operate, which is useful for examining our own biases. But whenever I see these, I wonder if this is how things would actually go.

A month or so ago, we saw some of the drafts for a Wonder Woman movie penned by Joss Whedon. To put it lightly, it caught some flak. Within the droves of criticism, some commenters pointed out that Diana would most likely not resort to insulting someone by telling them to “be man enough.” First off, she was previously unfamiliar with the concept of men in general. Second, as an Amazon her frame of what is strong would include only women. So if anything, she would say to “woman up,” but again, the gender thing wouldn’t come up the same way, because she doesn’t even know men existed. Third, would a society completely comprised of women still value strength as one of its key tenets and judge someone’s value on their bravery and toughness? For a warrior society, maybe, but not necessarily. Would their values be roughly the same as our more patriarchal society, just with a gender flip? I started thinking about it, and then I got to thinking about other times this theme caught my attention.

A few years back, I saw a French short film that was specifically about a society just like ours, except women were predominantly in positions of power. We follow a guy, maybe early 30’s, navigating a regular day. While I enjoyed the premise, the execution felt weird. During his morning routine, he saw women jogging topless, while he felt pressured to keep his shirt on and fully buttoned up. While returning from some errands, he saw a gang of female street punks hanging around and peeing in an alley. They eventually start cat-calling him. When he acted disgusted and responded, they proceeded to verbally harass him and physically and sexually assaulted him. He went to the police for help, but the female officer didn’t believe him and mostly victim-blamed him. When he called his significant other, she was also dismissive of his trauma, victim-blamed him, and showed generally aggressive, abuse behavior when picking him up. It was disturbing to watch, as would it be no matter the gender of the person having this day. These are real issues women go through every day, and we’re supposed to see a man in these positions and notice how ridiculous it is that nobody cares, and realize the error in our ways. (It shouldn’t take you having to see yourself hurt to empathize with others, but that’s a whole other topic.)

It was a film that meant to call attention to the many sexist behaviors that women have to deal with every day, and on that end, it succeeded. But as a depiction of a matriarchal society, it felt flat to me. I personally left the video wondering: aren’t these just negative male behaviors swapped onto the women? It seemed like the women were only drunk and disorderly, physically dangerous, and aggressive and dismissive because these were stereotypically cis male behaviors, rather than something they would have decided to do on their own. Just making cis women behave like cis men could be lazy writing, and it also undermines the point for people who need to see it. For example, the assault scene could easily be dismissed by a misogynist who thinks women are physically incapable of hurting men. They’ll see this example as preachy fiction, rather than as criticizing patriarchal behavior. But I have seen examples in fiction that show what a female-led society could potentially look like. These examples aren’t perfect, but they have a few notable points to consider. 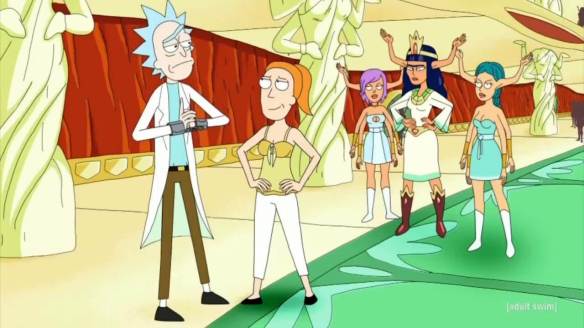 In Rick & Morty’s “Raising Gazorpazorp“, Morty purchases a sex robot from an alien planet. Rick and Morty’s sister Summer track it back to its origin planet to investigate the technology. They first run into violence and hormone-driven monsters with low intellect whose first action is to attack Summer, but the two evade them. All the while, Rick gives Summer a hard time for being a girl and is generally sexist towards her. Before long, they’re greeted by the women of the planet, who are presented in a much more refined manner. They walk upright, wear fancy clothing, and speak rather than grunt. Rick thinks his whole “I’m the smart man” schtick will work, but it very much does not, and Summer becomes the ambassador for the two humans. However, the two are put on trial for being from the patriarchal Earth. The society is framed very stereotypically, mind you. The women talk about their feelings frequently, discuss fashion, and the like. However, they’ve also exiled the men of their species to the fields due to their violent nature. There, they only fight each other and have sex with special robots during procreation periods. Between fights, the sex robots are dispersed for the men to fertilize, and then returned to a factory-like setting for delivery. The girls are given care and teaching, while the boys are blasted from a cannon back out to the fields. It’s played for laughs to everyone except Rick. The leaders point out that they tried an integrated society, but the men proved too violent for any sort of societal progression and often caused problems. Now that they are restricted to certain areas, Gazorpazorp is able to flourish into a technologically advanced society. Summer eventually convinces the aliens to let them go, albeit after some homophobic jokes, but they leave and Rick and Summer join back with the B-plot of the story.

While the society was still stereotypically feminine, it wasn’t just masculine-leadership-but-with-women. The matriarchal Gazorpazorp society clearly didn’t value fighting or strength, focusing instead on technological advancement and community. Would a female-led society truly be like this? Not necessarily, but it’s far more striking, to me at least, to see what would happen if male-coded traits weren’t deemed superior. In the Rick & Morty example, the alien women were also mean or aggressive (and competent leaders), but they went about things differently than a male-led society would. 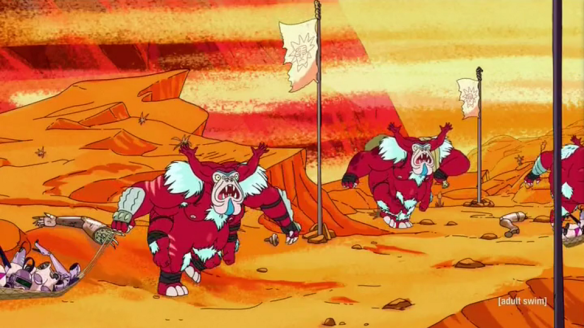 Not exactly the most elegant of gents. (Screenshot by me)

And I think that’s the best way to inspire thought and change within our own society. I can’t speak for women who may feel a level of catharsis seeing matriarchal societies in fiction, so I cannot pass any judgement on their value that way. If you like these stories, please continue creating and enjoying them! But when the goal is to change minds, I think a whole change of values is useful. Satire and commentary are supposed to challenge specific audiences. As I said earlier, if a matriarchal society is the same as our current lives, I feel like the audience isn’t challenged as much. If people didn’t already believe sexism was a problem, this method wouldn’t provide a new perspective, but just more of the same. Again, I don’t think that people should need to see themselves in distress to believe someone else’s, but it is a valuable way to inspire empathy. This can best be achieved by showing people an angle they haven’t previously experienced. That’s the real power with fictional matriarchies: when done well and creatively, they can be a catalyst for self reflection and change. I hope we can see more versions of these stories that show what a society free of patriarchal ills could be, for better or worse.