Children play a lot of different roles in fiction. Sometimes they embody innocence and goodness, such as in Rise of the Guardians or Hook. Other times, they’re used in direct contrast to that in order to create a sense of horror. Small creepy children with magical powers are… well, creepy. When we think of children, most people think of innocence, and there’s a reason for that. After all, many children have yet to be exposed to the horrors of living and their naivety only helps to reinforce the idea that they are good deep down. As such, when our media gives us children with awesome powers, especially if those children are evil, it plays into our fears by perverting something many of us commonly see as good.

One of the reasons the Creepy Child trope works so well is because it takes something harmless and makes it less harmless. Childhood is something we hold dear and losing our childhood innocence, or even the thought of losing it, can be scary and world-changing. The Little Prince is a good example of this, as the story explores growing up, mundane adult living, and whether or not that means losing your inner child. By contrast, the Creepy Child trope takes more adult, and often more gruesome, realities of life and pastes them over a perceived innocence. What we end up with is a facade that looks sweet and harmless, but is actually malevolent and dangerous.

The Creepy Child trope is particularly troublesome because small creepy children cover a wide array of topics. This might be an effective trope to get across a feeling of horror, but that feeling is also rooted in sexism and racism, and on top of that, it often plays off religion as well. We have a misguided notion that girls are more innocent than boys and that they should be better behaved, so it’s no surprise that this trope uses girls more than boys. As a society, we also tend to view whiteness as a form of innocence, and in all my twenty-eight years, I can only think of one non-white child in this role from The First Law books I read ages ago and hardly remember. When it comes to religion, stories like The Omen and The Reaping both based their children on Christian beliefs. The Omen’s Damien is the anti-Christ, and he spends his time getting his parents killed as other, weird deaths occur around him. The Reaping’s Loren was also first presented as an anti-Christ figure raining terror on a small town. Later on, however, it’s revealed that Loren is in fact an angel sent by God to punish the town for their crimes and Satan worship.

The social context this trope exists in makes it hard to use and hard to write well. I liked The Reaping a lot because of how it inverted this trope, despite that movie’s other failings (the twist was obvious). Buffy, however, used it less successfully. The first Creepy Child in Buffy is a young boy-turned-vampire called the Anointed One who’s destined to lead Buffy to an encounter that will kill her. He shows up, she knows he’s evil, and regardless she still lets him lead her, literally by the hand, anyway. The next season, the Anointed One dies. And he has literally no other role. In the Season 4 episode “Hush”, monsters called the Gentlemen show up and steal everyone’s voices. Buffy, being a Slayer, sometimes has prophetic visions, and before the Gentlemen’s arrival, she dreams about a small girl singing about what’s going to happen.

What bothers me about both these instances is that they don’t really add to the story. The Anointed One could have been removed without anything having been lost, and the little girl from “Hush” existed for… reasons, I’m assuming. We never find out who she is—even learning that she was one of the Gentlemen’s victims would have sufficed. She just shows up to Buffy as a vision, sings, and then disappears forever. Is she a spirit come to warn the Slayer, a figment of Buffy’s imagination, another demon? We don’t know. Both of these children existed for the sake of using this trope, and that’s why they add so little and create more questions than they answer. 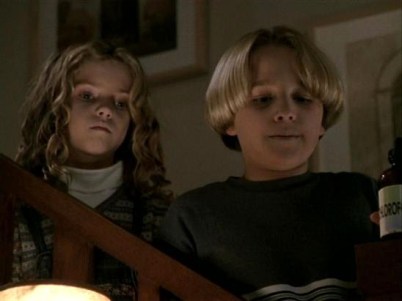 Buffy’s Season 3 episode “Gingerbread” also featured young creepy children and their use worked much better. After Buffy and her mother discover two murdered children in park with odd symbols drawn on their hands, the children come back as ghosts to create a witch hunt. The town’s people, under their influence, try to burn anyone suspected of witchcraft, and the children turn out to be a demon in disguise that creates chaos every so many decades. “Gingerbread” did a much better job than “Hush” in this regard, simply because the children it used served a purpose and didn’t exist for the sake of existence.

My most recent encounter with this trope, however, came from Resident Evil 7 in the character of Eveline. I wouldn’t say Resident Evil 7 is the best story out there—it has its own shortcomings, but unlike Buffy, it knew what it wanted to do with its child, and that’s why Eveline is a much stronger character.

Eveline is a bioweapon with mind control powers meant to be used in infiltration and wartime to end battles. Created by an unnamed manufacturer, other companies saw Eveline as a threat and tried to assassinate her. This prompted Mia to flee with Eveline to somewhere safe when they washed up on the Baker farm. Eveline works as a villain because her motives are well-explained and believable. Growing up in a lab, she lacked the love most children get and sought to create a family of her own. She’s also not a random child who was born with powers due to some supernatural force, but rather was specifically created—if I were creating a bioweapon meant to trick people, I would make her a small white girl too, because that’s what our society sees as innocent. Given Resident Evil’s problems with sexism and racism, though, I doubt Eveline’s creators really thought about how gender and race affect people, and this was probably a design choice they accidentally stumbled into. 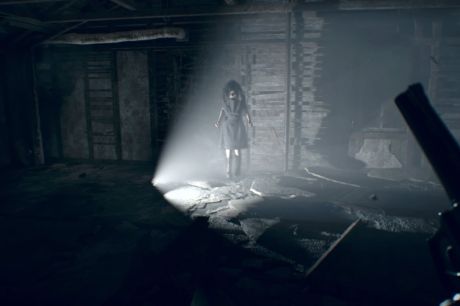 All that aside, what I like a lot about Eveline compared to other gifted, evil children, is that Eveline acted like a child. Characters like Damien and the Anointed One don’t display childlike traits. They don’t play games, laugh, or run around. Everything they do is calculated and adult-like. Eveline, however, actually was a child. She sought out parental figures, wanted to be loved, made rash decisions, played games, and threw tantrums. Even when Ethan kills her, she starts crying because no one likes her. She was an irresponsible victim of circumstance whose tantrums and impulsiveness got people killed and destroyed lives.

Small creepy children with supernatural powers is not my favorite trope in existence, if only because of the aforementioned racism and sexism issue. I think it’s a trope that can be done well, such as in Eveline’s case, but it’s also something that can easily be done poorly. “Hush” is renowned as one of Buffy’s best episodes, and yeah, the little girl is creepy, but her addition doesn’t do much for the story and has confused me for years. As for characters like the Anointed One and Damien, they’re very obviously evil demons and lack childlike traits, so I found them boring. If a story’s going to have an evil creepy child, it helps if the child in question is, you know, an actual child with a personality.

Buffy’s episode “Gingerbread” freaked me out when I first watched it, but I still don’t know what “Hush” wanted to accomplish with its Creepy Child or how I was supposed to feel about the Anointed One. This trope is overused, to the point that it’s no longer surprising or scary in most instances. Sometimes, as with “Hush”, it seems like a lazy way to invoke terror without actually invoking terror. Eveline worked because she managed to be unique—she had childlike desires and fixated on the main characters based on her need for a family. One of the points of the Creepy Child is that they’re supposed to be creepy, and maybe even scary. If the child’s boring and underdeveloped, that can’t happen.