Comic-Con isn’t really my scene, but this year a trailer dropped and with it, so too did my pre-emptive ten bucks for a theater ticket. Amidst the other announcements, none more enchanted me than beloved director Guillermo del Toro’s fusion between fairy tale and horror story, The Shape of Water. Just…. just look at it.

See? Isn’t that everything you didn’t know you wanted? (I might be projecting a little bit.)

Set in the mid-1960s, while America was living through the early years of the Cold War, The Shape of Water focuses on Elisa, a janitor at a secret government facility. Elisa’s life falls into an easy routine of the nine-to-five grind, and though she works with her friend Zelda, she can’t help but feel alienated by society at large. Her own self-loathing at her muteness and society’s (especially big ol’ government directors) willingness to look down on both the working class and people with disabilities fills Elisa with loneliness. That is, until she begins to connect with the secret government project in the room she’s cleaning. Unable to communicate at first, Elisa begins to connect with the mysterious fishman kept inside the tank. As it becomes clearer that the government is going to chop him up in order to study him, Elisa takes matters into her own hands.

While I fully admit this movie doesn’t necessarily move away from what a stereotypical “fairy tale re-imagining” is–a more subdued color palette, a willingness to delve into violence and other unsavory themes, etc.–I think this is a much more interesting take than what most directors seem to be doing, Disney. The Shape of Water may not be analogous to one particular fairy tale, but how it blends the fantastical with the realistic makes it belong in my book. As the trailer itself starts out by calling Elisa the “princess without voice”, the movie is begging viewers to make the connection, and as far as fairy tales go, I’m glad that Elisa is another “princess” who has an extremely active role in her story and is willing to fight against what she perceives as an injustice.

I’m excited to see how del Toro utilizes Elisa’s muteness in exploiting the prejudices of the movie’s antagonists. In the trailer already there’s a scene where the government officials interrogating her have no idea what she’s saying to them because they don’t understand American Sign Language (or that’s how it appears). I also appreciate that del Toro has no problem making audiences read subtitles, rather than magically “fixing” Elisa in some way. The love story between her and the fish man appears to be less about some love at first sight thing, but instead affection grown from the mutual understanding and empathy of the other’s terrible treatment by those in power. In that vein, I do hope that by the end Elisa realizes that she’s not “incomplete” because she is mute. Yet as much as I love Sally Hawkins as Elisa already, it would have been wonderful if they had cast a woman who was mute already, rather than someone acting mute. 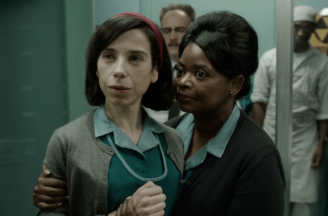 Dr. Black Guy now increases the total to two, but I doubt he gets any lines. I’d hope for some characters of color outside of the government building (ones with speaking lines), but I feel like I should know better. (via IndieWire)

Nevertheless, my excitement for a strong disabled protagonist can’t outweigh the fact that I’m not exactly impressed with the other facets of representation. Elisa’s friend Zelda is played by Octavia Spencer (who you may have seen in Hidden Figures) who will no doubt be excellent, but I didn’t see another Black person the whole time. In fact, I didn’t see anyone else who wasn’t a white dude for the rest of the trailer. While, yeah, I understand that 60s America historically speaking probably wouldn’t have a non-white person in charge of a top secret government project, it’d still be nice to acknowledge that other people of color actually existed beyond the “best friend” character. Maybe things will improve in the trailers to come.

Despite this, I’m incredibly excited to see what marvelous things del Toro has planned for this film. Del Toro seems devoted to showing audiences lovely, beautiful moments in the midst of pain and strife and even terror. Making audiences root for and maybe even fall in love with what is purportedly his take on The Creature from the Black Lagoon gives audiences yet another opportunity to reflect on what is really terrifying: a creature we don’t understand, or the inhumanity with which it’s treated. If you’re as excited to catch this (potentially heartbreaking) fairy tale as I am, make sure to catch it when it hits theaters December 8th!