Final Fantasy XII was just re-released for the PlayStation 4 and I have been playing it nonstop these past couple days. With the exception of FFVII, I would say that XII is my favorite game in the series. It has some problems, but on the whole, it’s a great story with some amazing worldbuilding and interesting conflicts and characters. And as I’m still hung out over how bad XV was, playing XII has been an amazing throwback to better times in the series. As such, I had to go looking for some fanfiction for it. XII has never had that many fics in the past—there’s only about a thousand on AO3—but that doesn’t mean there aren’t any gems out there. Most of the fics I’ve ever read for XII have been true to the characters, insightful, and a lot of fun. That also holds true for The Agony of Breathing In and Out by argle_fraster. 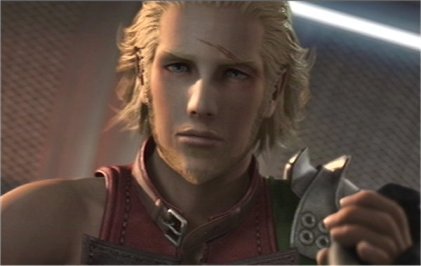 Trigger warning for PTSD flashbacks and disordered eating up ahead.

The Agony of Breathing In and Out is a one shot taking place after the characters escape from the Barheim passage in the early parts of the game. The character Basch just spent the past two years of his life locked up in dark, solitary cages, cut off from any other people except for an occasional visit from his twin brother. Having been framed by his brother for murdering a king, Basch’s prospects are rather bleak. Even after being rescued, he’s met with distrust by people he once considered friends and finds himself struggling to fulfill his duties to his people’s new monarch, the previous king’s daughter.

What’s more, his muscles have atrophied over time—he cannot use a sword as he once did, his legs are weak, and he’s malnourished, so unused to food that the thought of eating makes him sick. Then there’s the PTSD as well.

The worst of it are the nights. At night, Basch remembers the cells – he remembers the cage. He cannot stop the feel of suffocation that closes in around him. After a particularly rough nightmare, where he wakes gasping and convinced that he was back there again, hanging until his body ceased breathing, he claws his way out of the tents they had set up and over to the edge of the hill overlooking the Ozmone Plains. He can’t breathe. His fingers grapple at his neck and find no restraint, no iron holding him in place, but even then, it is a long time before he can disentangle himself from the memories.

He is still lost in them, alone and trembling, when Balthier finds him there on the cliff’s edge.

“Not set to jump off, are we?” the other man asks, and it sounds flippant, but something about the tone of his voice gives him away. He sits down, committing, as Basch looks over at him through splayed fingers. When he drags his hands over his face, tugging at the skin and the days’ beard that has grown, he feels slightly more in the present. “I do think you could find a better spot for that. What would the children think?”

“Do not let them see this,” Basch rasps, suddenly overcome; what would he do if they were to stumble out of the tent now? He has nothing if not his status, and being a knight is about more than simply being good with a sword. The weakness eking out of him now should shame him, and he can’t yet summon the emotions for it.

There is a moment of silence, before Balthier answers: “Don’t worry about that. It seems you have much bigger things on your plate.”

Basch barks out a mirthless laugh, for that is an understatement if he’s ever heard one. “Sometimes I think it will never get better.”

This fic ends with Basch finding support in all the other main characters, as they slowly accept him, forgive him for whatever role he played in the king’s death, and begin to understand that he was a victim too. Basch also finds a lot of support in the character Balthier, and the fic ships the two together. Though it’s not my personal ship, the way the two characters interact really adds to Basch’s internal struggles and the way he heals from his traumas.

While the game shows us Basch’s weakened state briefly, it doesn’t really go into his torture or the agony that he must have been in, or how that would have affected him mentally. As much as I like Final Fantasy XII for its characterization, the game has always been more interested in how Basch’s faked execution and subsequent survival affects other people more than it’s been interested in how being framed, distrusted, and abused affects Basch. The Agony of Breathing In and Out fills in that hole and provides Basch the time he needs to heal and puts into perspective how much work and effort it must take him to be functional. And hey, if you’re a Basch/Balthier shipper, this fic is also definitely for you. Be sure to check it out here on AO3.

1 thought on “Fanfiction Fridays: The Agony of Breathing In and Out by argle_fraster”