I’ll admit it, I started watching Princess Principal because it just looked fun. Young women kicking ass as spies in a steampunk fantasy version of turn-of-the-century London, set to a jazzy soundtrack and wrapped up in science-magic? Yes, please. I’ve been pleasantly surprised to discover that this show that I picked up solely for its geeky Cool Factor is… actually really damned good, delivering consistently sharp writing, interesting and layered characters, and some wonderfully efficient and intriguing magical worldbuilding that makes fantastic use of that old writing adage “show, don’t tell” that paints a vivid picture of its fantasy world from its very first scene.

Because it did such a good job laying the groundwork and piquing this viewer’s interest, let’s look just at the show’s first episode, and the small but important details the premiere gives us (and how) that let us build a picture of the world… without leaning too heavily on narration, pausing or cutting into the action to explain what’s going on, or having an audience point-of-view character that others teach things to.

Princess Principal is set in an alternate version of Victorian Britain, though you will have a much better time if you accept this show as fantasy rather than trying to figure out what aspects of real-world history carry over and if we’re going to meet steampunk anime Queen Victoria at any point. The set and costume design all weave together to create an intricate and solid steampunk aesthetic that makes it both familiar and alien at once: the gaslit street shrouded in fog and lined with terrace buildings is a quintessential Victorian image. But the addition of the pipes spitting steam from the background and the shots of our main spy, Ange, observing said street from on top of some sort of smoking mechanical mess of cog-work, immediately tells you this is not Sherlock Holmes’s London. The smoggy darkness backlit with orange and red from the cog-work also creates a foreboding atmosphere that leads you into the coming chase scene… and makes the little flashes of bright green we’re shown stand out even more.

As well as the cogs, pipeworks, and airships we can plainly see dotted around the landscape, the main factor that sets this fantasy version of England (here named “Albion”) apart from the real one is the presence of a fantastical substance called cavorite, and it’s this that sits at the heart of the show’s neat worldbuilding. The premiere opens with a short, narrated introduction in the style of an old-fashioned newsreel telling us the basic details of how this fantasy world works: chiefly, we’re told that Albion is the greatest military power in the world thanks to having a monopoly on cavorite, and that Albion has been split in half by revolution.

This opening exposition-via-narration technique is common among fantasy and stories set in alternate worlds—think Galadriel’s monologue at the start of The Fellowship of the Ring that gets you up to speed with the history of Middle-earth and who the Bad Guys and Good Guys are. Opening with narration explaining the way the world works isn’t necessarily a bad thing, though when done wrong it can feel a bit like you’re being lectured and not trusted to figure things out on your own. The interesting thing to me about Princess Principal’s opening spiel was that in many ways it raised more questions than it answered, very much inviting you to figure things out on your own. Like, what is cavorite? How does it work? What does it have to do with the civil war, if anything? And who is that mysterious girl the camera focused on for a moment there?? We’re handed enough information to dive into the story with some sense of a guidebook in hand, but we’re also filled with questions that the show gives us the tools to answer once it’s piqued our curiosity and made sure we know what’s important. 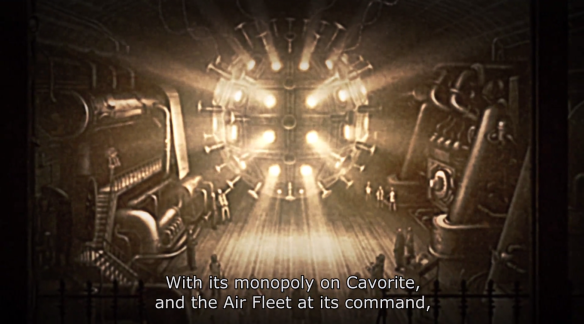 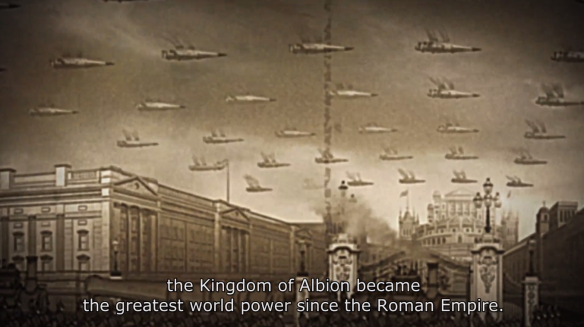 The opening episode doesn’t deign to answer my “but what the heck is cavorite?” question concretely, but again, it gives you enough information to rifle through and begin to put some answers together yourself. In the show’s opening shots that I talked about above, we see flashes of mysterious bright green. The immediate “I wonder what that is” question is answered when we see that it’s our spy protagonist Ange, using a strange metal orb that lights up glowing green and makes her, and anything she touches, float. The scientist she kidnaps/rescues in this scene sees this and exclaims “cavorite?” so from that we can infer this is an example of this mysterious science-fantasy element. It’s a small moment of dialogue as the action kicks off, but it’s very deliberately placed.

A trap that fantasy (or even sci-fi) can fall into is stopping the story in its tracks to explain the magical elements to the audience. The Fate franchise, for example, has a habit of pausing its adventure story to feature long conversations between its characters about the rules of the magical worldbuilding, and action scenes are often padded out with dialogue where characters effectively explain how weapons or effects work (including exclamations about how powerful they are, to make sure that we know—though this is pretty much a staple of the shounen action genre). Princess Principal doesn’t pause to explain that the floating ball is cavorite, or how it works, but instead throws us into an action scene with the ball at its center, showing us what it can do and letting us infer that it’s powerful. We can also logically guess, from the fact that it lets Ange defy gravity, that cavorite is what Albion is using to create their ahead-of-their-times flying machines and thus their unparalleled air force. It doesn’t spell it out for us, but we can put the pieces together from what we’ve been shown (and, as it turns out, this is confirmed in the third episode when we see an airship with an engine compartment the same neon green color—though we’re not told that it’s cavorite, all the pieces are in place for us to reasonably assume).

We’re also shown, once this first fun chase scene (complete with flying cars) is over, that despite the fact it can let ordinary human beings fly, cavorite is perhaps not a miracle element. Mid-chase scene, Ange has to stow her little cavorite orb in a cooling container, implying—but not outright stating—that it might break or go awry if it overheats. We don’t see what happens if it does, because Ange very clearly knows what she’s doing (a slight abnormality for a fantasy protagonist, but we’ll get to that in a moment), but the threat is there. We also meet a girl with cavorite poisoning in the first episode, and while we’re not sure what that entails, we know that she’s in the hospital needing an expensive and serious operation, and that her eyes have turned the same glowing green as cavorite itself.

Without using these exact words, these little scenes tell us that as cool as cavorite is, it’s also dangerous, making two points about this fantasy world along the way. Firstly, we begin to realize that the empire of Albion owes all its progress to a dangerous and volatile substance that must be extensively heat-monitored and can make people who come into contact with it very sick. If Ange has to keep a careful eye on her fist-sized cavorite orb to make sure it doesn’t overheat, how careful do you have to be with the amount of cavorite you need for a whole airship? No one says this, but given what we’ve observed we can start to consider it. Seeing a sympathetic human being suffering from cavorite poisoning was also a more effective, character-based way of getting the dangers of the element across, rather than, say, having people just talk about it in clinical, detached terms. Learning that there are consequences, both personal and on a bigger scale, to this magical power adds depth to the worldbuilding, and adds a sense of risk and stakes—two important things to any fantasy element, and again, Princess Principal establishes these stakes without having to spell them out to us.

It also tells you, without using these exact words, how dangerous the life of a spy is, wordlessly adding depth and stakes to the character-driven aspect of the show as well as the fantastical aspect. As if Ange didn’t have enough to worry about with all the car chases and gun fights, now it’s been established that her main tool of the trade is a volatile substance that could do her a whole lot of harm. Every time she uses that orb of hers she risks fantasy-radiation poisoning or serious injury if it overheats, breaks, or stops working mid-air. The reveal of cavorite poisoning and the overheating issue tell us how frightening her everyday life is, and it also tells us how professional and badass Ange is to handle cavorite and its flight powers with the ease that she does.

Another common method for getting worldbuilding info across, which Princess Principal avoids, is through an audience stand-in combined with a mentor character. For example, Harry Potter knows as little about the world of wizards as the audience does, but luckily he has a whole school of teachers and mentors to explain things to him. From that opening scene it’s clear that everyone in Princess Principal… more or less knows what they’re doing already, so there’s no member of the cast that takes the role of question-asker and no need for a teacher figure to roll out the answers. It gives us a cast full of capable and impressive young women (which is a plus on its own), and it means the series has no excuse to spoon-feed the audience information. Everything we learn about the powers and dangers of cavorite, and the skill set of the people who use it, is demonstrated through action rather than having characters explain it to each other or a narrator explain it to the audience. 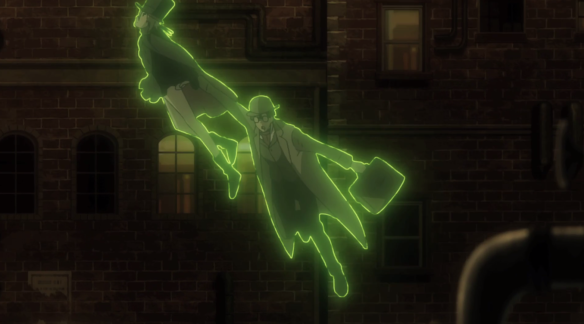 Like some sort of small, sinister Mary Poppins. (screencapped from AnimeLab)

So, all from the very first episode we have a functional understanding, if not yet a complete one, of what cavorite does, how this fantasy world revolves around it, and its limits and dangers on a personal and whole-world scale—all of this woven into the adventure story taking place. In the same way that Princess Principal gives you a sense of, and gets you interested in, its main cast of characters without sitting the audience down to explain their pasts and motivations, it’s also gently feeding us information about how the world works through the plot itself, trusting you to think and infer from what it shows you as it rolls along rather than stopping the story to info-dump or having a token oblivious character learn everything on the audience’s behalf.

That first car chase scene in episode one sets the bar for how the rest of the series does its worldbuilding. Every scene serves a double function: to suck you into an engaging and fun adventure story, and to tell you something about the characters or the fantasy world or both. Once that clunky but necessary narration about the air fleet and the revolution is out of the way, Princess Principal has some of the best use of the “show, don’t tell” rule I’ve seen in a while, dodging plenty of fantasy exposition tropes and drawing me curiously into this steampunk escapade. It invites you into this world of spies, intrigue, and magic tech, and lets you look around and figure things out for yourself.

2 thoughts on “Magical Mondays: Showing, Not Telling in Princess Principal”