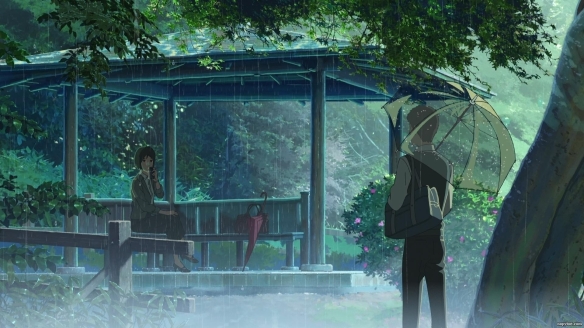 The Garden of Words came out in 2013, and for four straight years my Tumblr dash has been scattered with gifs celebrating the beautiful scenery and animation in the film. But apart from how pretty it was, I didn’t actually know anything about the plot of this iconic movie, so when I saw it on AnimeLab, I decided to dive in and investigate. Sure enough, it’s an absolutely gorgeous film that should 100% be celebrated as an achievement in animation, atmosphere, and visual storytelling about the way human lives connect. It was kind of spoiled for me by an unexpected case of compulsory heterosexuality, but hey, you can’t have everything…

Spoilers for the whole movie beyond!

The Garden of Words is a quiet, sweet movie about a few quiet, sweet moments and how they have the power to change lives for the better. Our protagonist Takao is a fifteen-year-old boy who regularly skips school on rainy mornings, opting instead to sit and sketch in the Japanese gardens near his connecting train station. One day he arrives at his favorite park bench and is surprised to discover a woman with the same habit as him: she’s dressed up to go work in an office, but is instead sitting in the gardens drinking beer and eating chocolate. The two are awkward and a little embarrassed to have someone else catch them in what they assumed was their private space, but neither of them moves, and so they run into each other again and again when they keep coming back to that same place every time it rains.

Gradually, the two begin having conversations, sharing food, and opening up about themselves. The film shows us just enough about their respective lives that the audience can appreciate how unusual and wonderful this is for each character—Takao is a quiet student with a bit of a tumultuous home life, far better at concentrating on his hobby of designing shoes than connecting with his brother or co-workers; and the woman, Yukino, exhibits plenty of signs of depression, and lives alone while maintaining an awkward but amicable relationship with her ex-boyfriend. In their homes, the body language of these two characters is hunched, quiet, and sad, but when they’re together on that park bench they light up and unfurl.

They still don’t know anything about each other, of course, but they form a sweet little friendship that has them both praying for it to rain every morning. Takao confides in Yukino about his aspiration to design and make shoes, and she’s supportive and even lets him measure her feet for reference in a strangely intimate scene. In the gardens, it’s always fresh and green and soft, and these two can open up and be happy in ways that we just don’t see in their lives when it’s not raining. The atmosphere the film creates is tangible, making the sunny days in the story feel stifling and stale compared to the calm comfort of the rain.

Unfortunately, all good things must come to an end, and the two characters find themselves in limbo when the rainy season ends. They miss that connection, clearly, but when the sun is out they have no reason to go back and no certainty that they’ll find their friend in the gardens if they do. As if this wasn’t enough, their dynamic shifts irreversibly when they see each other at school, and Takao finds out that Yukino was a teacher there, who is quitting because of nasty rumors spread about her and a romantic relationship with a student.

Reality hits pretty damned hard when the two are forced to see each other outside of that dreamy, safe, almost magical space that is their park bench in the rain. The mystery of why Yukino was hanging out in the gardens is solved when we realize that she went there because she was too scared and stressed to go to her workplace, where horrible allegations were being spread about her by jealous students. Her stress got so bad she lost her sense of taste and could only enjoy beer and chocolate, which explains her terrible (and illegal) snacking habits and adds a new significance to her being able to eat and enjoy the lunches Takao cooked. 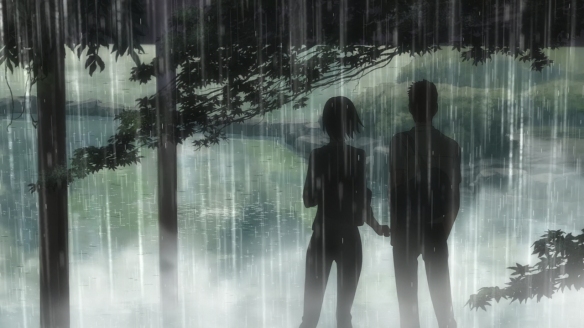 The two of them meet in the park, when it’s not raining, with all this finally out in the open, and kind of have to work out what to do next. They have to admit, outside of the dreamy landscape of their rainy-day gardens, that they were using that place—and in many ways, their friendship—to avoid day-to-day reality. Appropriately enough, a storm blows in and rages over this whole tumultuous afternoon, catching them off guard and forcing them to run back to Yukino’s apartment, into new territory for the both of them. There, Yukino tells Takao about her plans to move away and start afresh, and Takao tells Yukino how he’s fallen in love with her. Both these confessions shake the room and uproot everything they’ve established in their relationship, albeit… in quite different ways.

Now… two things Takao’s admission of love for Yukino rubbed me the wrong way. The first is that I’m all too wary of age differences and power inequalities in romantic media, even if they’re one-sided. I couldn’t shake the inevitable thought “would this be presented as such a cute, rather than creepy, thing if this was a high school girl and a male teacher?” Yukino takes the time to remind Takao that she’s a teacher and he’s a student, though due to the subtlety to all the dialogue in the movie, this can legitimately be read as her rejecting him or as her simply pointing out a relationship isn’t appropriate. Thankfully there’s no forbidden love angle or even any sense of physical attraction beyond a hug, and while they exchange letters after the story ends, the ending doesn’t read as though Takao and Yukino have “ended up together”. You could say, poetically, this wasn’t a love story, but a story about love. But, poetic as that is, this brings us to my second issue: did this really need to be a story about romantic love?

The film beautifully shows that emotional intimacy doesn’t have to be romantic, and physical intimacy (like the scene with the feet-measuring) doesn’t have to be sexual. It seems a bit of a cop-out to boil Takao’s feelings down into a crush. Until that point, without the romance angle present, The Garden of Words had been a refreshing step away from what you’d normally expect in a story about strangers growing closer. A fifteen-year-old boy and a twenty-seven-year-old woman aren’t traditionally expected to get along or even really interact, but they could still help each other out when their paths crossed by chance. 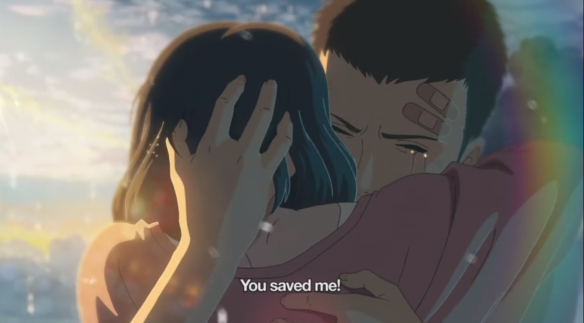 Without the romance, that message stands a lot stronger, if only because it was different. Even if the film isn’t a conventional, requited love story, having Takao be motivated by romantic love was… oddly disappointing. Could they not “save” each other with platonic affection? It buys into the whole idea that men and women can never be “just friends” because sexual tension or whatever will always get in the way, and the trend that women can never be role models to younger men, only objects of desire. These are both tropes and ideas that are very old and very annoying, and felt out of place in the story.

It also seems like the kind of thing that would sour Yukino’s side of this life-affirming and positive relationship. Surely, having been accused of dating (or worse; we’re never quite sure what the “nasty rumors” are) a student, an accusation which gave her a stress disorder so bad she couldn’t go to work and lost her sense of taste, having Takao confess his love to her would be nothing short of horrifying? Granted, it makes their dynamic more complicated, which I feel is definitely the point of the latter part of the film, but it seems an unnecessary extra layer of trauma and stress for poor Yukino, especially when her friendship with Takao was the thing that helped her get back on her feet. The film is too busy giving us a (visually stunning) run-after-each-other-in-the-rain scene where Yukino sobs all over Takao that he’s the one who saved her, to really address this. And yes, while that scene is beautiful, I couldn’t get it out of my head that this sweet and positive relationship had taken a turn for the uncomfortable in those last few moments.

So, yes, the film is definitely a visual masterpiece, with an amazingly effective sense of atmosphere. Up until the end, it’s also a sweet and unconventional story about a sweet and unconventional little friendship, showing the power of emotional connection and the importance of having a safe, kind space where you can be yourself and try to figure yourself out. Perhaps you’ll enjoy this movie more if you, unlike me, aren’t a cynical old woman tired of romance taking pride of place in media. But if the awkward teenaged crush puts you off, hey, you can always just look at the scenery gifs.

1 thought on “The Garden of Words: A Masterpiece, But Did It Have to Be a Love Story?”