(via A Wiki of Ice and Fire)

Spoilers for Season 7 of Game of Thrones throughout.

Before the seventh season came out, I knew that it would probably be worse than the seasons before it. I just didn’t know how it would be worse. But disappointed I was not. The horribleness this time around more than exceeded my expectations. There are so many things to talk about, but here on Lady Geek Girl & Friends we try to keep our posts below a certain word limit, so we don’t bog you readers down with a post the size of a novella. And Game of Thrones’s seventh season is so asinine that a novella is exactly what I’d be in danger of writing if I tried tackling all my thoughts. Thankfully for me, Mikely will be by later this month with his own Game of Thrones Season 7 review. In the meantime, however, I’ve got a bone to pick with Prince Rhaegar Targaryen, his annulment to Elia Martell, and all the worldwide implications that entails.

Trigger warning for abuse, violence, and sexual assault up ahead.

In the books, Prince Rhaegar and Lyanna Stark are two characters whose actions had widespread consequences for the whole of Westeros. Dead before the series even starts, we don’t know all that much about them, but for many fans, it was obvious that they were Jon Snow’s real parents long before that was revealed to be true in the show. What we do know about Rhaegar is that he was obsessed with prophecies, especially one in particular about The Prince That Was Promised. The Prince is supposed to be a savior born from the Targaryen line. This prophecy also combines with the saying “the dragon has three heads”, which Rhaegar took to mean that the Prince would have two siblings. At first, Rhaegar assumed himself to be the promised prince, but after a while, he believed it would be his own son.

Rhaeger also wanted his children to be named after three famous Targaryen siblings, Prince Aegon and his two sisters Rhaenys and Visenya. After Rhaegar married Princess Elia Martell of Dorne, Elia gave birth to a Rhaenys and then to an Aegon. At this point, Aegon Targaryen is Rhaegar’s heir, but the pregnancies nearly killed Elia and she couldn’t provide Rhaegar with a second daughter to be named Visenya.

This prompted Rhaegar, a grown man in his early twenties, to run away with Lyanna Stark, who was only sixteen at the time. When Lyanna’s father and oldest brother traveled to King’s Landing to demand her return, King Aerys II had them both burned alive. Then Aerys demanded Lyanna’s younger brother Ned Stark and her betrothed Robert Baratheon also be executed. This resulted in a war that ended with Robert killing Rhaegar and usurping the throne, Elia and her two children being brutally murdered, and Lyanna dying in childbirth. All these events turned out tragically, and once again, we learn that Rhaegar was wrong. The Prince That Was Promised wasn’t Aegon either, and even though he wanted a daughter named Visenya, what he got was another son.

For the most part, all this stays the same in the show, but with one really big difference. We find out that Rhaegar had his marriage to Elia annulled in secret and that he married Lyanna, making Jon Snow the rightful heir to the throne over Daenerys. Not only that, but Jon Snow’s real name is apparently also Aegon Targaryen, and I just… I can’t. Despite all this season’s flaws, I really did want to like Game of Thrones again, and a lot of the inconsistencies I was able to force myself to ignore this season, but this annulment ruined everything. The show used this plot point to ignore its own history, justify Rhaegar’s relationship with a teenager (although other characters have been aged up in the past, it doesn’t look as though the same is true for Lyanna), blame Robert for the war, and completely erase any of the importance of Elia and her children in order to make fan-favorite white boy Jon Snow the rightful king of Westeros.

When Bran Stark uses his magic visions to see Jon’s birth in the show, he tells us that Rhaegar and Lyanna loved each other and that Robert’s rebellion was built on a lie. Robert was a very flawed person—a rapist, misogynist, womanizer, child abuser—and indeed, he failed to see that Lyanna never loved him the same way he obsessed over her. But despite all that, his rebellion wasn’t entirely unjustified. Aerys II had just murdered two noblemen without cause, and then demanded that both Ned and Robert also be killed without cause. Rhaegar’s actions certainly led into the war, but regardless of Lyanna’s lack of feelings for Robert, he had more than enough reason from Aerys’s actions alone.

And as for Rhaegar’s and Lyanna’s love, the relationship seems misguided at best and abusive at worst. To start, I need to question what Lyanna even saw in Rhaegar. She didn’t want to marry Robert because she knew he was a womanizer and that he would cheat on her constantly. Yet, for some reason, Lyanna was perfectly okay running off with Rhaegar, a man who publicly disrespected his own wife by crowning Lyanna a “queen of love and beauty” in front of the whole realm and then left his wife and two children behind because she couldn’t have more children. Leaving a woman who nearly died to bring two children into the world because she couldn’t have a third child is a pretty shit thing to do. But Rhaegar didn’t just disrespect Elia and the Martells, he disrespected Lyanna. 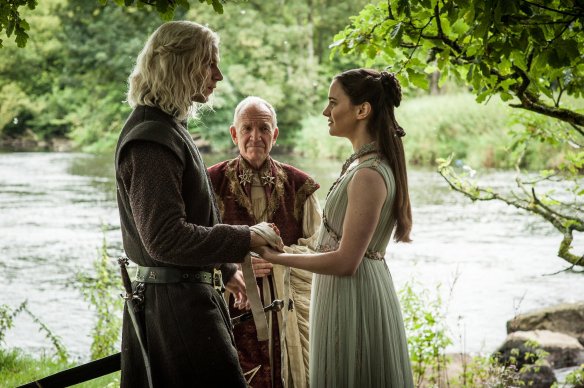 Rhaegar’s actions pitted his own house against Lyanna’s. He went to war against her family. And all the while, he had Lyanna hidden away in a tower in Dorne. As the link above points out, Lyanna was free-spirited. What little we know about her, we know she was not one to do as she was told, or one to hide. Staying in the tower for the pregnancy is suspicious, and the only worldly information she would have had access to was whatever Rhaegar wanted her to have. Regardless of any feelings they may have had for each other, Lyanna’s situation created a disturbing power imbalance. Rhaegar isolated her in a land far away from her home and intended to kill her family. When Ned arrives at the tower to find her, Lyanna calls out to him, but the Kingsguard members try to kill him anyway. On top of all that, naming her son Aegon when Rhaegar already had a son named Aegon is really shitty. There was no possible way for her to have known Elia’s son was dead at this time. Did Rhaegar tell Lyanna to name Jon that? Was he truly that dismissive of his previous heir? And did Lyanna even know there was a war?

These questions probably won’t be answered anytime soon, and that leads me into my next point. The annulment makes no sense. Rhaegar had no legal cause to annul his marriage. Elia already provided him with two children, one of whom was male. Elia’s Aegon was Rhaegar’s heir and presumed Prince. Not only that, Rhaegar and Aerys needed Dorne on their side in this upcoming war. Elia and her children made great hostages in order to push Dorne into defending the crown. Annulling the marriage would mean bastardizing Elia’s children and alienating Dorne even further. This would have been absolutely disastrous for the Targaryens. But nope, Rhaegar somehow annulled a marriage in secret, then went down to Dorne with Lyanna and married her in secret in the land of all the people he just pissed off. Rhaegar left Elia and his two children behind in King’s Landing to be tormented by Aerys with no protection whatsoever. Elia’s uncle was a member of the Kingsguard, and not even he was allowed to stay with her. Instead, Rhaegar had him protecting Lyanna, despite the massive slight he just caused all the Martells.

I’ve seen a lot of people trying to defend Rhaegar’s actions here, because Elia is Dornish, and the Dornish are more likely to enter open relationships due to cultural differences. None of that means that Elia herself would have been okay with Rhaegar disrespecting her in such a way. Furthermore, even if she was all right with Rhaegar sleeping around, it wouldn’t change how the rest of Westeros felt about it and how they would view it. Elia’s daughter was stabbed over fifty times, her son’s head was bashed in in front of her, and Elia herself was raped before also being murdered. All of that happened because Rhaegar disregarded her, and the show annulling their marriage just serves to further erase her character and her importance. Like, who cares that Elia was killed? Rhaegar and Lyanna were so in love. In fact, they were so in love that they named their son together Aegon Targaryen, even though Rhaegar already had a son named Aegon.

I have been stewing over this for some time now. Was Rhaegar going to name every son he had Aegon? Is there a particular reason we have to throw Elia, a woman of color, and her children of color, under the bus in order to paint some tragic romance and injustice against Rhaegar’s relationship with a white girl? Unfortunately, I shouldn’t even be surprised by this—Game of Thrones has made a habit of reducing its characters down to just a few traits. This is why someone like Tyrion is now entirely a good person, instead of someone driven by his own selfishness and biases, and now the same is true for Rhaegar. An earlier season made a point of letting us know that wars and people are complicated. There is goodness and evil in both people and in wars and that one side is not automatically right just because their leader thinks they are. Despite this, Game of Thrones keeps giving us the opposite message. Like Tyrion, Rhaegar is no longer a flawed, complicated character. He is just “good”, just as Jon Snow is “good”, regardless of anything bad they may have done. They will never be held accountable for their actions by the narrative, and in Jon’s case, he has been rewarded with legitimacy at the cost of other characters who don’t deserve to be punished.

Part of Jon Snow’s character arc was coming to terms with the fact that he’s a bastard child. But this season, Game of Thrones pretty much went, whoops, no need to worry about that, false alarm, all that character development was in fact not needed. It’s okay, everyone, Jon Snow’s legitimate. And it did this by glorifying some asshole’s relationship with a teenager and completely ignoring the trauma that Elia Martell went through. I feel as if the writers have been following this trend for a while now—characters are not good because they are actually good people, but because the narrative tells us they are good people. But Rhaegar’s actions and carelessness paint an opposite picture. How he treated both Elia and Lyanna is horrific, and what he did sent the realm into war. Thousands of people lost their lives because Rhaegar put his personal desires above other people’s needs. This is something he should not be praised for. The way the story shows us his annulment and subsequent remarriage to Lyanna, it reduces Rhaegar from a complicated character with flaws to just a good person, and it’s also completely illogical. So yeah, Elia Martell deserved better.