When I reviewed Dreadnought earlier last week, I wasn’t aware that it had a sequel — the book came out early this year, and sequels usually take a least a year to put together. But against all odds, Dreadnought‘s sequel Sovereign was published a mere six months after Dreadnought, and so I went on down to the library to pick it up. What I found was that while Dreadnought had a fairly clear-cut narrative as a coming-of-age story for its trans protagonist, Sovereign tried to tackle many different issues at once and had the very typical sequel problem of not getting deep enough into any of them. Still, amongst the issues with gender, race, the media, a TERF villain, and a quickly developing romantic relationship, Sovereign did succeed in raising some thought-provoking questions about superheroism as meritocracy.

Spoilers for Sovereign below the jump. 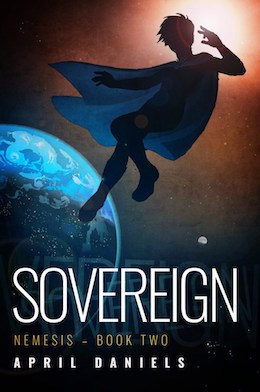 In Dreadnought and Sovereign, superheroes are widely-known and entrenched enough in history to have their own subculture. The first Dreadnought was one of the first superheroes; he appeared near the end of World War II in a Captain America-esque fashion, helping America to win the war and then continuing on as protector of America until he was brought down by the first supervillain, Mistress Malice. The mantle of Dreadnought passed from person to person through the years until it got to the current Dreadnought, Danielle Tozer. Danny is a superhero fanatic, and she knows that in America, there are whitecapes (superheroes who fight supervillains and help out with general disasters), blackcapes (supervillains), and greycapes (who are somewhere in-between). There are also people who say that they aren’t superheroes but have “special abilities” only: they can fly fast so they act as couriers, or they don’t need to breathe so they help firefighters rescue people from burning buildings, and the like. These people are, for many reasons, afraid to call themselves superheroes — though Danny, a fifteen-year-old girl who becomes the most powerful superhero on Earth, thinks she’s got it made, a lot of other superheroes are discriminated against because other people, like the people who might rent apartments to them, think trouble and supervillains follow superheroes everywhere they go and want nothing to do with them.

Though Danny is trans, she’s very cognizant (sometimes unrealistically so) of the privilege that is afforded her as a pretty white girl. This comes out in many ways in how she’s treated as a superhero: she’s on all the talk shows, people call her “the first transgender superhero” even though there have been trans and nonbinary heroes before her, and she gets paid a lot of money for what she does for the city of New Port. Other superheroes’ lives are very different. Her friend and future girlfriend, Calamity, is a Latina superhero whose powers came from the U.S. government experimenting on her family. Even now, she refuses to work with the government or anyone associated with them, like the cops or Danny’s new group of heroes. Other superheroes get their powers as expected from  common superhero tropes — lab accidents, curses — and their acceptance varies depending on their gender, ethnicity, abilities, and morals.

Superheroes have always been around, but in Sovereign, there seem to be more of them than ever before. Danny and her friends quickly find out that this is because of Nemesis, a mysterious thing that Mistress Malice brought up at the end of Dreadnought. Upon further investigation, they find that Nemesis is an asteroid on a three-thousand-year loop around Earth, and as it gets closer, it causes “quantum irregularities” that cause superpowers. Handwavy pseudoscience aside, this is the cause of the number of superheroes increasing exponentially, rather than just slowly increasing. In Sovereign, Danielle is facing off against Richard Garrison (the titular Sovereign), a wealthy tech man who makes Tony Stark look like a harmless nerd. Garrison’s gotten ahold of Nemesis and has constructed satellites to bounce its signal all across the world. Garrison’s own superpower is negation — if he’s in range of a person with powers, he can negate that power. That’s not enough for Garrison, however; he connects his satellites to technology that lets him block superpowers whether or not he’s anywhere near the person in question.

All this is to say that Garrison is using his powers and technology to try and create his own new world. Now that he has Nemesis and his technology, he can make everyone into a superhero — or take those superhero powers away. He’s even working on a way to take certain superpowers, like Dreadnought’s, and transfer them to other, more “deserving,” people. As he tells Danny, he’s had enough of democracy. He doesn’t want powers to be assigned by some stroke of luck; he wants only the people who’ve “earned” powers to have them. In short, he wants to set up a superhero hierarchy with himself as head, and he sells this to Danny as some sort of utopian superhero meritocracy.

Danny herself is an interesting problem in light of this issue. Like many superheroes, she was gifted her powers at random — she was in the right place at the right time to help the last Dreadnought, and he gave her his powers as he died. Danny faced incredible transphobia at home and in school, and being the immensely powerful Dreadnought gave her a sense of power that she couldn’t get from anywhere else in her life. At the start of Sovereign, she’s become a whitecape and is defending New Port. Under Garrison’s supposed meritocracy, she would be one of the “good” ones — she has great powers and uses them with great responsibility. But when Danny refuses to help Garrison, he tries to take her powers from her. Furious, Danny goes on a rampage — she nearly kills Garrison’s partner Graywytch and the footage is used against her in a court of law, painting her as a loose cannon with anger management problems. Rather than defend her, Danny’s teammates tell her the truth — she’s not fighting just to help others; she’s using her powers as a release valve on her frustrations and she’s equating her own worth with her accomplishments as Dreadnought. Danielle has embraced her status as the most powerful superhero in the world and uses it as a might-is-right way of dispensing her own justice, making her in essence very similar to Garrison, who wants to be a king with absolute power.

In the end, Danny’s friends get through to her and Danny realizes that Garrison’s wrong — having the best superpower doesn’t make you the best person. She sees an entirely different appeal in the possibility of everyone on Earth becoming superheroes. While Garrison believes that not all powers and all people are equal, Danny is excited about the idea of everyone as a superhero — then everyone could be treated equally and have an equal chance of fighting against their oppressors, whether they be supervillains, corporations, or governments. Danny’s victorious group has two choices — send the Nemesis asteroid away from them, thus eventually ending the reign of superheroes on Earth (as all powers would be leeched away), or leave the asteroid where it is, ensuring that everyone on Earth would eventually become superheroes. Danielle, as team leader, chooses the latter option. Nemesis will stay where it is, and everyone will eventually become superheroes. Though some on her team point out that this could mean a rise in the number of supervillains as well, Danny thinks that the possibility of everyone having the strength to defend themselves is worth the risk.

On the surface, this seems like a good decision. Danielle chooses to give everyone superheroes to even out the inequalities between people with powers and people without them, and to even out the inequalities inherent in some powers being more esteemed than others. It’s a decision made with the best of intentions. But unfortunately, it’s not a decision that really interrogates the difficult questions that Sovereign tries so hard to lay out. Who “deserves” superpowers? Furthermore, who deserves to make the choice about who deserves them or not? In a world where superheroes are known, how do they fit into society; how do they contribute to it and how can society still take advantage of them? These are questions that we typically don’t get in superhero media.

In the 2000 X-Men film, Magneto wants to turn all humans into mutants just so they would know what it was like to be part of a persecuted minority; his plan wasn’t carried out as part of a plan for everyone on Earth to be equal but rather so that he could eliminate the “inferior” human species. In Brandon Sanderson’s Reckoners trilogy, an object similar to Nemesis appeared near Earth and gave a small group of people incredible superpowers; these people were selected randomly and their selection wasn’t based on if they had earned said powers or not. So Sovereign is really asking the hard questions about escalating power in a world fundamentally built on inequality. But like many of Sovereign‘s other issues, the final answer is insufficiently wrapped up in a couple quick paragraphs — Danny decides that everyone should have superpowers and everyone else rolls with it. How is that not similar to Garrison’s superhero meritocracy, where he alone would decide who got powers or not? Particularly in light of Danny’s own transgender narrative, did she never think about whether or not people would want powers — powers that could affect their own bodily autonomy? Even Danny’s best intentions don’t mean that she should be allowed to speak for all of Earth.

It’s unclear as of yet whether Sovereign will have a sequel, but if it does, I hope it’s set after the world’s powers have started to set in. If everyone has superpowers, I would imagine the world would have more problems, not less; more superheroes, more supervillains, more collateral damage. Author April Daniels has built a thought-provoking new world in a genre that many are tiring of — a unique spin on superheroes is a hard thing to pull off these days. I look forward to seeing these issues discussed in more depth and with more nuance should the series return.