I may not like horror for its gore and jump scares, but I do like it for its willingness to delve into dark plotlines and creative worldbuilding. Unfortunately for me, most horror stories are too scary for my taste, and as it’s the month of Halloween, I was lamenting that I wouldn’t find a creepy story that could fulfill my needs without giving me nightmares. Last week, though, I finally decided to suck it up and watch the first season of American Horror Story, entitled Murder House. All ready for the trauma I was about to subject myself to, I started off the first episode with my finger hovering over the mute button on my controller, my feet conveniently propped up in front of my face to block the screen from view should I need it, and my sister-in-law on the phone to talk me through the worst of it. 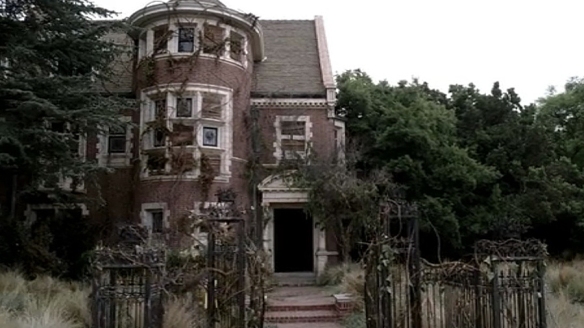 My preparations were for naught, however, as I found out, much to my own delight, that while American Horror Story is dark and creepy, it is not scary. Murder House left me with some mixed feelings—the story often falls victim to convoluted storytelling, sexist and ableist tropes, and a camera that jumps from scene to scene with very few transition shots. Nevertheless, I found the story enjoyable enough to blow through it in no time, but the more I thought about it, the less happy I was with the overall experience. Murder House suffered from some really bad storytelling decisions—it tries to talk about complex and serious issues, but fails to adequately explore those issues with the care they deserve. Murder House captivated me for the story it wanted to be, but the story that it actually is is a lot less compelling.

Trigger warning for sexual assault and ableism below.

Season 1 follows the characters Vivien and Ben Harmon and their teenage daughter. After Vivien miscarries, she buys a dog to help comfort herself, you know, like normal people do. Ben, however, gets annoyed that she turned to a pet for comfort and not his magical penis, and being an entitled piece of shit, he cheats on her. In order to start over again and salvage their marriage, they move all the way from Boston to Los Angeles and into an old Victorian mansion that’s on sale for a reduced price because the previous owners died in it. 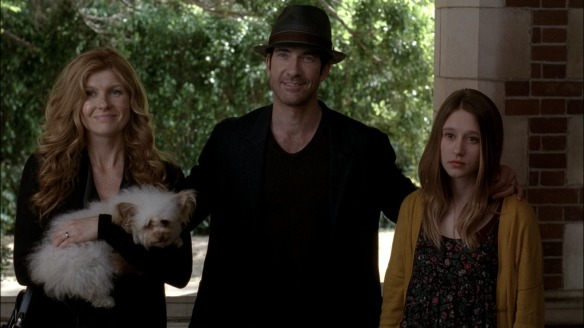 What could go wrong? (via playbuzz)

Here, the Harmons are greeted by strange neighbors, a maid who appears old to women and young to men, and a mentally ill boy named Tate who’s always in their house for some reason. We eventually learn that all the deaths in the house date way back to the 1920s and that when someone dies there, their ghost remains trapped for forever. The house maid, Moira, and various other people were murdered in the house, and Tate died via SWAT team after he shot up a high school in the 90s. With the exception of the dog, all the Harmons pass away inside the house as well, and we last see them working together with the house’s other benevolent spirits to scare away any potential new owners so they don’t share the same fate.

This story felt less like horror and more like “normal domestic problems with ghosts”. While that works out perfectly for me, it’s not actually a compliment. Murder House tries to be scary, and it tries really hard, but it’s just… not. There are some things about it that are kinda scary, but most of it just falls under the creepy or weird categories. Murder House also introduces numerous subplots that don’t really go anywhere. For instance, there’s a ghost who’s always wearing a rubber body suit, and he rapes Vivien by pretending to be Ben. We learn that one of the ghosts desperately wants a baby and that’s why she gets the rubber suit man to rape Vivien, but Vivien is already pregnant. We also learn that any child conceived from both a spirit and a human will be the Antichrist. This is a subplot that goes nowhere. The Antichrist has a half-brother twin who dies with Vivien in childbirth, leaving them both trapped within the house, and the Antichrist is then raised elsewhere. Then the season ends. Just like that. The Antichrist storyline does absolutely nothing, and considering that it’s the fucking Antichrist, you’d think that wouldn’t be the case. 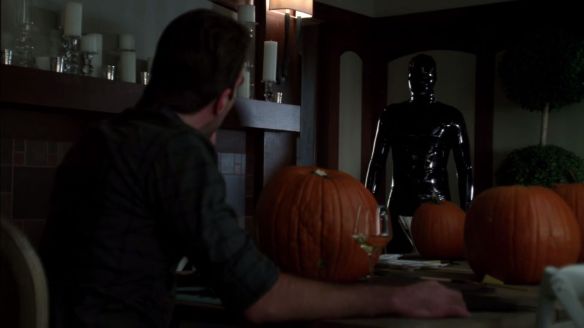 I also want to point out that rape is overused in way too many stories. To Murder House’s credit, it tries to explore Vivien’s trauma when she realizes that she was raped and more or less does an okay job with it. Unfortunately, the rape existed to shove in the Antichrist, and as it goes nowhere, it’s completely unnecessary. Vivien’s trauma could also have simply come about from living in a house with ghosts, some of whom are malevolent, and had the rape been removed, little to nothing in the story would have changed.

The rubber suit man is probably the creepiest occupant in the house, and I feel as though the rubber suit man would have been scarier had he not been revealed and remained a mystery. But it turns out he’s Tate, and this revelation was just… not needed. We already know Tate is a murderer and troubled, and revealing him to be the rubber suit man was just a letdown. Tate can’t handle adversity—when people even remotely raise their voice at him he breaks down crying, and to have him be the main villain didn’t feel like it paid off all that much.

Tate, however, is an interesting character and I do feel as though Murder House was trying to start a dialogue through him about how we excuse white boys’ actions no matter how horrible they are. Ben even spells it out for us at the end—Tate is a manipulative psychopath who’s really good at garnering sympathy. If AHS fanfiction is anything to go by, it totally worked on the audience. Unfortunately, the show undermines its own message here. Tate actually is emotionally vulnerable, does feel bad about his actions, and is constantly pushed into doing things he doesn’t want to do by other ghosts. We know this is genuine, because we see him in scenes where he’s alone and acting vulnerable, even though there’s no one around to manipulate. The show can make him a well-rounded character without apologizing for his actions, but it never actually manages to fully convey what an irredeemable person it clearly wanted him to be. It’s one thing to try to create commentary on how society sympathizes with rapists and mass murderers, it’s quite another to accidentally sympathize with rapists and mass murderers. 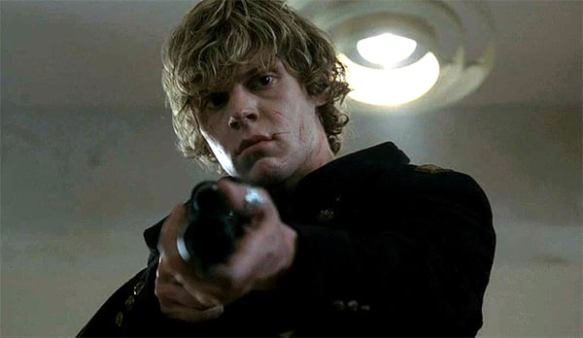 Which leads into Murder House’s biggest problem. It doesn’t quite know where the line is between depiction and endorsement. Moira’s appearance, for instance, is a good example of this. Her ghost appears as a young, sexy maid who’s constantly horny and comes onto any man who walks into the house. Her character could easily be a commentary about how men see and abuse women. Unfortunately, the show never quite gets there. For one, this is very heterosexist and male gazey—there’s even a scene of her making out with another woman specifically because of the male gaze, and she’s continuously slut-shamed by her own murderer. Moira was shot after a married man tried to rape her, and the man’s wife mistook them for lovers. There’s never any point when anyone acknowledges what Moira has gone through or how society has hurt her, and considering that she and Vivien are friends, I’m disappointed that the show never lets the two of them talk about their trauma together.

And of course, there’s the ableism. Oh, God, the ableism. Murder House introduces an autistic character, Adelaide, and she is thankfully not villainized. Sadly, she does die, but she dies outside the house, and therefore her ghost never comes back. Her life before death is also one of abuse. Her mother constantly puts her down and often locks her in a small room with mirrors so she can see how ugly she is. One of her brothers is Tate, and her other brother, whose ghost also haunts the house, was born deformed. Their mother locked him in the attic before murdering him so the state couldn’t take him away due to child abuse. Here, Murder House is once more trying to depict a serious issue with varying degrees of success. While any child can face abuse, disabled children can be treated especially heinously. Adelaide grows up being othered and put down, Tate never gets help for his mental health issues, and their brother lived his life chained to a bed.

The worst thing is that these disabilities are themselves part and parcel of Murder House’s horror. One antagonist character is covered in burns, the basement is inhabited by an overgrown and disfigured infant, Tate turns out to be our main villain whom we may or may not be supposed to sympathize with, and his brother is first introduced through a jump scare, because his appearance alone is supposed to scary. But we never explore his character, to learn how he feels about his own life and death. He’s just kind of there, because why not? And as for Tate, the show goes out of its way to let us know how mentally ill he is—his ghost is even on medication for it—and tries to relate his mental illness to his villainous actions. Yes, it’s possible for mentally ill people to do horrible things because of their illness, but considering how stigmatized mental illness and disabilities already are, this type of othering is irresponsible and does have real-world consequences.

Murder House has so many opportunities to go into some serious subject matter and easily could have done it well, but the show ends up being more concerned about its attempts to be scary and edgy than it is about what messages it might inadvertently be sending. As much as I enjoyed the first season, I can’t in good faith recommend it. It’s enjoyable if you can watch it without being overly critical, and that’s what I had to do while viewing it, but the minute it was over and I started thinking about what I just watched, well… let’s just say that my journey through Season 2 is going much more slowly. If you want something dark and creepy for Halloween, but not scary, Murder House is for you. If you want something that’s going to discuss mental illness and disability without being absolutely ableist and sexist in the process, I’d recommend checking something else out. The Babadook is pretty good.