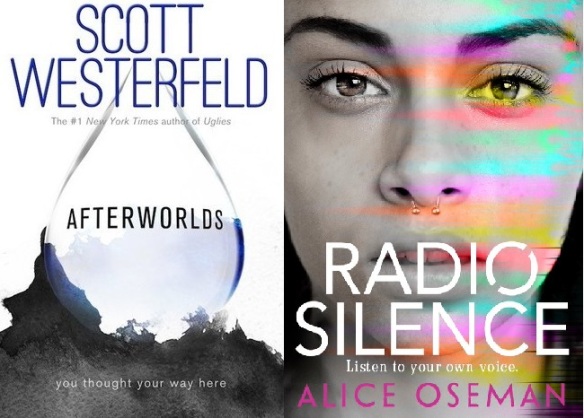 It’s Asexual Awareness Week, which means that though I’d do it any time of the year, it’s the optimal time of the year to recommend and gather recommendations of media with asexual protagonists. Today I want to talk about two brilliant geeky YA novels with main characters that are not only relatable, complicated, and funny, but sit on a perhaps lesser-known place on the asexual spectrum: these are two characters who are confirmed as demisexual.

Demisexuality is when you only begin to feel sexually attracted to people once you form a strong emotional bond with them. The most common misconceptions about it tend to be that the demi in question is just “picky” and chooses to get to know people first, or that they’re no longer, or never really were, asexual at all once they find someone they like enough to be attracted to. As with the many grey areas along the ace spectrum, it can be a tricky thing to both explain to people and define for yourself, especially given how society so easily conflates romantic, aesthetic, and sexual attraction all together as one big amorphous thing when they’re really separate and very different feelings—and, as always, different for every individual person!

I know that I’m somewhere under the ace umbrella, but finding an exact word to define my unique, personal scenario has kind of felt like I’m a sleep-deprived detective staring at a conspiracy board trying to link evidence together with bits of string. While I’m still bumbling along trying to figure myself out, it was immensely rewarding and heartwarming to read these two books where characters (who are younger than me, mind you) get to not only find happiness in their ace identities and have fulfilling relationships, but get to be the stars of moving and engaging stories.

Our first demi hero is Darcy Patel from Scott Westerfeld’s Afterworlds, an eighteen-year-old writer whose world turns upside-down and sideways when she’s offered a publishing contract. The novel alternates between telling two stories: one is Darcy’s, the story happening in “the real world”, and the other is Darcy’s novel, a supernatural romance about ghosts and death gods. For the purpose of this post, let’s stay focused on Darcy, as she moves to New York and is swept into the equally terrifying worlds of YA publishing and Adult Life™. Among all this chaos she meets Imogen, a paranormal YA author in her early twenties, and the two fall in love over their mutual passion for books and words (and too-expensive, but oh-so-delicious, ramen).

Now, as Noodle pointed in their review of the novel, while Darcy does face some confusion and discussion about having feelings for another woman, there isn’t any point where she comes to identify as lesbian or bisexual, or even any point where she out-and-out describes herself using any queer terminology. She suspects she’s not gay since she’s at least attracted to boys in theory, given she based the love interest in her novel off a Bollywood star she always thought was pretty hunky. When talking about it with her friends, however, the best she can come up with to describe how she feels about attraction is a guess that she’s “Imogen-sexual”. This line made the thought of Darcy being demi begin a slow waltz around my brain, and though I liked the idea, I didn’t harbor much hope for it being confirmed… so you can imagine my delight when I stumbled across this Tweet from Scott Westerfeld where he does exactly that!

Much as it might rub some readers the wrong way (and much as yes, I would have definitely preferred to have it confirmed in the novel rather than on Twitter), Darcy’s lack of self-identification comes across more as her being unsure about it herself, and resolving to shrug it off and simply do what makes her comfortable, rather than asexuality being something taboo that ought not to be discussed. On reflection, I think this is pretty normal for a lot of people–labels, after all, will suit some people and not others. Even if Darcy doesn’t define herself as demi in-text, it’s good to know that interpreting her that way is an author-confirmed valid reading. And it lets the heart of the novel be the love story itself, rather than how it shapes the characters’ identities. Darcy’s romance with Imogen is a delightful mix of adorable and complicated, and in many ways her relationship with Imogen comes to represent, or at least parallel, Darcy’s relationship with writing: she loves it with her whole heart, but she is also forced to learn over the course of the story that now she’s moved into a daunting but rewarding grown-up world where that love must come with a lot of risk, consideration, and hard work for it to become something meaningful.

As well as being an intriguing glimpse into the book industry, a wonderfully non-cringey portrayal of fans and fandom, and kind of a love letter to writing itself (without becoming pretentious!), Afterworlds is a heartfelt coming-of-age story with a protagonist I found myself connecting with and cheering for. Though the fact that she’s dating a girl for the first time is something Darcy and her friends and family have to process, Afterworlds is not An Issue Novel and the plot does not revolve around the main romance being Different—which leaves breathing room for the struggles within the romance to be something more unique to the characters and their relationship rather than the blanket issue of it being queer.

My next glowing recommendation is also not An Issue Novel, though as a step up from Afterworlds it does actually have its characters describe themselves using queer terminology, and quite comfortably too. I’m talking about Alice Oseman’s Radio Silence, the story of Frances Janvier, an overachiever whose whole world revolves around trying desperately to get into a prestigious university… at least, when she isn’t sneaking time between studying to geek out over her favorite sci-fi podcast. The podcast is a delightfully eerie, surreal, futuristic audio drama that makes for a lovely homage to the likes of Welcome to Night Vale (in the same way the novels in Afterworlds make for lovely homages to YA), and Frances is ecstatic when the creator of the pod messages her inviting her to create art for future episodes.

This would be enough of a bizarre and wonderful change in Frances’ life, but things get even more topsy-turvy when she realizes that her neighbor Aled Last is the podcast’s creator (and Aled realizes that his neighbor is the artist he just signed on), and their online friendship becomes an offline one. And what a beautiful friendship it is, forming the emotional core of the book and proving that life-affirming love stories can be platonic as well as romantic.

Aled is the character who identifies as demisexual—and he uses that word, providing a sort of out-of-body experience in this particular reader where I floated out of my skeleton in happy shock. Much as I appreciate Westerfeld engaging with his fandom and confirming Darcy as demi via Word of God, Oseman immediately earns 1000 more points in my book for addressing and defining it in-text. Frances, it’s worth noting, also identifies as bisexual; something she’s figured out herself and doesn’t need to be proven through a romantic relationship, or agonized over for the purposes of self-discovery. Given that Frances is our narrator, we don’t get inside Aled’s head the same way we get inside Darcy’s, but seeing Aled through Frances’ point of view makes her affection and protectiveness for him infectious, and you find yourself deeply attached to the guy.

This also means that, instead of seeing his path to self-identification firsthand, you instead see clues and glimpses to Aled’s quiet quest to figure out his demisexuality over the course of the book, both through behavior and character dialogue. Aled coming out as demi is both a confirmation of hints dropped throughout the novel and a moving moment between the main characters, this confident self-identification very much part of Aled’s happy ending (without spoiling too much, Aled also gets a romantic happy ending with someone who understands and respects his demisexuality, proving, as with Darcy and Imogen, that people under the ace umbrella can still have wonderful and fulfilling romantic relationships).

Radio Silence, like Afterworlds, is a wonderful and authentic look at the positive effects of fandom and creativity, and though there is a romance at one point, the backbone of the novel is Frances and Aled’s sweet and strong friendship. This is, of course, a rare gem in itself, and I’d be shouting its praises on that merit alone, but the book also hits it out of the park with thoughtful handling of sexuality and self-identification that comes across as nuanced and just so normal. And I think that’s one of the most important things representation in fiction can do: present us with loveable, layered, engaging characters that get to be the heroes of a fun and interesting story while also being celebrated for who they are and how they identify–whether they’re confident about it like Aled or still figuring it out like Darcy–normalizing the whole thing in the process. This is important for any sexuality, but especially so for lesser-known identities like demisexuality and others along the ace spectrum.

As I said, ’tis the season to celebrate this particular brand of diverse media–have you read any books, YA or otherwise, with ace protagonists that you would recommend? Let us know in the comments!