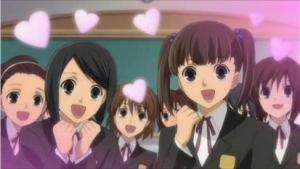 My obsession with Dungeons & Dragons doesn’t seem to be going away. Playing it is so much fun, and there’s so many great D&D stories told in various podcasts and webshows, that I just can’t stop watching and listening and looking for more. I especially try to look for shows featuring female DMs and female players since most popular D&D productions, such as The Adventure Zone and even Critical Role, are male-dominated. And so today, I want to tell you about about a cool and funny all-women D&D actual play podcast: Dungeons, Dice, & Everything Nice. 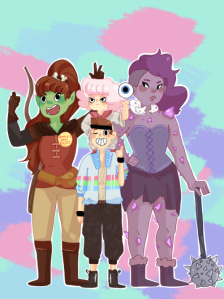 Dungeons, Dice, & Everything Nice is created by five comedy students, which probably helps explain the quirky and ridiculous characters and story they’re creating. It starts with Griana Arande (Carly Strait), the owner of a meat shop, and her employees Kai Abadite (Syd Foltz), Zil Nire (Liz Burton), and Phibi Valpip (Molly Schafer) setting out on a hunt to supply meats for a fall festival. Kai is a barbarian and a burlesque dancer, Zil is a street magician, and Phibi carries around a mysterious stone eyeball that seems to give her magical powers. Dark things are afoot in the forest and soon all hell breaks loose, setting them on a path towards a mysterious destiny. We don’t know much about it, but it appears our heroes are marked to be part of a mysterious organization protecting the world from greater, possibly divine, forces. However, before they can investigate any further, the women are roped into participating in a heroes’ tournament. Will it lead them towards their destiny as well or is it just a mundane distraction? We don’t know yet.

One of my favorite things about this show is that the DM, Katie Mae, embraces and rolls with the silly things her players say and do. Sometimes it leads to hilarious effects, such as Zil inventing the skateboard. Other times, there’s something sinister to it, like Griana’s parents being half dead (what does that even mean? You have to listen to find out). That being said, Katie Mae also knows how to bring up the stakes for the player characters, without always hanging the threat of death above their heads. One of the most intense episodes in the show so far features the player characters being interrogated one-on-one by a particularly callous NPC. Katie Mae roleplays the NPC brilliantly and removes the possibility of reducing the intensity by not allowing the players to speak out of character at all. This kind of mix of hilarity and high stakes reminds me a lot of The Adventure Zone and, I think if you’re a fan of Tres Horny Boys, you would probably enjoy this podcast as well.

Another point that I always pay special attention to is queer representation. Starting this podcast, I didn’t know anything about the plot or the players, except that it was an all-women production. To my delight, it soon became apparent that both Zil and her player Liz are women who like women. In the prologue, Zil meets the NPC Alivia and immediately gets a crush, which turns out to be reciprocated. They go on a date and it’s the cutest thing ever. Liz even wrote an adorable in-character journal entry about it. The sexuality of the other characters is unclear, but when a female NPC asked Griana out, she was interested, even though the date ultimately didn’t happen. It hasn’t been explored any further yet, but I’m hoping that the topic will be revisited since Carly remarked that Griana was reconsidering her sexuality in the wake of that event. LGBTQ+ folks don’t get much representation in the fantasy genre or games, so it’s very heartening to see LGBTQ+ players playing queer characters.

The show does take a few episodes to find its footing, which is natural, both in terms of production quality and the players (some of whom haven’t played D&D before) figuring out both D&D and their characters. I still recommend listening to the whole thing because it’s hilarious and the role-play is excellent from the get-go, including bits like Zil’s date with Alivia and the amazing interrogation sequence. However, if you wish to skip over the entirety of roughly 20 episodes of the prologue, there is an episode recapping the prologue arc. You can listen to that and jump right into the first proper arc, which is only a few episodes in right now.

Dungeons, Dice, & Everything Nice is a little gem in the making in the world of D&D content. It features a group of women, including queer women, being silly and ridiculous and heroic. If you’re a fan of silliness with feelings, reminiscent of The Adventure Zone, you should totally give it a listen and let me know what you think! You can find the ladies on their website, and you can also follow them on Twitter and Tumblr.