We follow Mike Painter, a child psychologist who is still suffering from the trauma induced from his own childhood. After a string of child kidnappings and murders happened in his hometown of Iron Hill, his twin brother being among one of the victims, Mike left the town at the behest of his mother. Despite going on to lead a rather successful life, Mike is drawn back to Iron Hill to put the memory of his brother to rest and to find the true evil lurking behind the children’s TV show that Mike feels is responsible for it all—“Candle Cove”. Time is of the essence, though, as Mike quickly discovers that “Candle Cove” has “entered syndication” and this generation of children is being exposed to whatever horrifying magic the show casts.

Though it only had six episodes to explore this story, Channel Zero somehow pushed so much unnecessary bullshit into its plot that it felt convoluted and, unfortunately, befuddling due to how nothing really connected. Given the length of the original creepypasta, it was obvious and expected that the writers would have to add something to keep people entertained, but I can’t say that any of this “something” added to the lore in a meaningful way. The most egregious and the least worth talking about are unnecessary romance subplots. Suffice to say that the “will they, won’t they” between Mike and his childhood girlfriend (they’re both married to other people now, by the way) leads to nothing important, and was more than likely just a setup for her death to be all the more shocking when it happens.

To get into my biggest problem area, the oddly placed religious undertones of the show, the plot twists must be explained. In Candle Cove’s final episodes, it’s explained that “Candle Cove” wasn’t a mysterious show that kids randomly saw. Instead, it was a manifestation of Eddie’s (Mike’s twin’s) rage towards the other kids in the town. Eddie’s latent psychic abilities created something appealing for children so he could trick them into killing themselves as some sort of revenge for bullying him—telling someone to “walk the plank” to “enter Candle Cove” meant walking off a cliff to their death. However, apparently Eddie’s powers didn’t stop there. The main villain of the show, Frances Booth, witnesses first hand the extent of his powers.

Frances, who has suffered from violent seizures for presumably all her life, comes to worship Eddie after he’s able to stop her spasms with a single word. She even kills her son in order to increase Eddie’s powers. From what I gathered, Eddie’s powers grow with a person of his choosing dying (presumably). Back in the past, it was with the death of his childhood bullies. In the present, it’s uh… not explained at all. No more kids die, and the deaths of his brother’s now older childhood acquaintances seem inconsequential. But I digress.

In the show’s present, Frances (still a teacher) gathers young kids and brainwashes them, teaching them to kill and encouraging them to lose themselves within “Candle Cove” in order to prepare for Eddie’s return. So now there’s not simply a couple of older people reminiscing about this eerie old show they used to watch, but an actual, literal cult surrounding it. To Frances, Eddie is a Jesus figure—a boy capable of miracles and healing, and a boy who, with her help, will rise from the grave and lead her and her cult into a new era of… something. In another story I really do think this could be interesting, but it just doesn’t work here. Since the original “Candle Cove” creepypasta has nothing like this, the show needs to spend the time setting this up; it needs reasons why this works. However, between explaining this, the relationship between Mike and Eddie, introducing the plot device of “Candle Cove”, and everything else, there’s simply not enough time to make this compelling or scary or threatening.

Whereas the story is just as white as I expected it to be (though Luisa D’Oliveira’s role as Amy, the only competent police officer in Iron Hill, was a pleasant surprise), I find myself at a loss at how to interpret the role of women in this season. Personally, it’s frustrating to see every woman be so closely tied to motherhood, but an equal amount of the men are tied to their fatherhood as well. Since the shift of Candle Cove’s story went from focusing on a weird kid’s show to how kids are suffering due to this show, it’s understandable that there would be a larger emphasis on how the parents are reacting to their kids changing under the show’s influence. Yet I still do feel like the men were allowed more agency on the whole. Most of the women just went along with whatever the guys were doing, and didn’t have much of a character outside of that. We see this clearly when we compare two of the other police officers, Daphne and Tim.

Both of these characters knew Mike when they were children, and both of them know about “Candle Cove”. However, when Mike is abducted in an attempt to get him to confess what he knows about the past kidnappings and murders, Tim is given much more leeway to react than Daphne. Tim lashes out, shoots Mike, and is there dealing with the repercussions of his brother (who was the first to die all those years ago) being a huge bully. Daphne cries about the people who died, but she doesn’t really… do anything. While I fully admit this is her character—somewhat cowardly and almost unwilling to act on her own accord—it helps make the inaction of the other, non-villainous women much more noticeable. Despite them being around at the same time as the original airing of “Candle Cove”, they rarely take action for themselves and only wait for one of the main male characters to tell them what to do. It would have been interesting to have some women actually connected to the original kidnappings investigating in the background. Mike is legitimately the most suspicious person in existence, and Iron Hill is a small town where everyone knows each other. 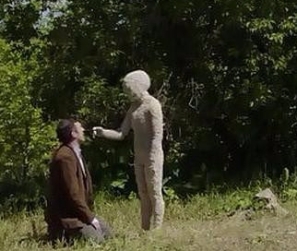 Candle Cove is not a bad show. In fact, it did keep me actually wanting to see what would happen. In the end, though, it wasn’t a good “Candle Cove” show. In fact, they could have exchanged “Candle Cove” for anything, and the story would have been the same. In creepypasta form, “Candle Cove” is scary because of the unsettling imagery and the unexplainable nature of what happened. Television doesn’t allow for the vagueness that allows our minds to imagine unnamed creepy things, but by giving such a concrete reason for the existence of “Candle Cove”, and by making it affect one group of kids in one town, it  destroys the whole point of the original narrative.

I have much higher hopes for Channel Zero’s take on “No-End House”; its story relies less on imagination and gives Syfy the chance to do what it really loves—make weird special effects. While “Candle Cove” didn’t stand up to my scrutiny, I still recommend that people looking for a show that’s less horror and more supernatural psychological thriller (and who are less pedantic than me) check it out.