Happy Halloween, everybody! Sadly, this will be the last post of the year. I know, it’s awful, but we writers have been working hard, and we need a longer break than usual to recover.

I do hope you have all been enjoying yourself, because I have not. October has been a rough month for me, and my quest to find something to watch to fulfill my Halloween needs hasn’t helped much. Lord knows American Horror Story is, well… it’s something. And the original 1990 It didn’t do much for me either. It was halfway through It that I realized Stranger Things’s second season was out—excited, I forced my sister-in-law to quit It with me and watch it. And oh, thank God. Stranger Things was the pick-me-up I needed. It is so wonderful watching a story where the good outweighs the bad. I hope my love for this show hasn’t been influenced by the shit I watched before it, but Stranger Things’s second season was awesome. 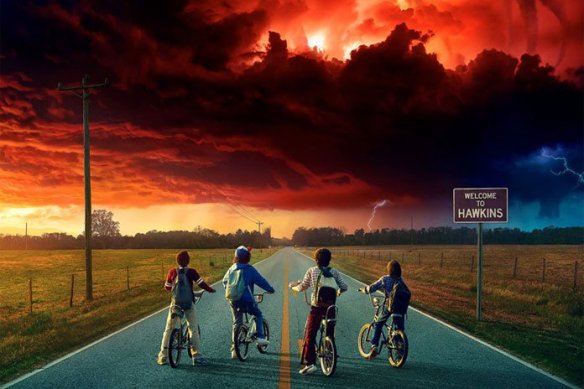 Stranger Things instantly became one of my favorite shows when I first watched it. The first season still had more than a few problems, but despite that it’s probably my favorite season of the two thus far (if I had to pick a favorite). I have to give credit where credit is due: Season 2 did a great job expanding on the story, and it had a really strong narrative reinforced by themes of morality, family, and belonging. These are things that all the characters struggle with throughout the season, and this also allowed Season 2 to attempt to fix some of Season 1’s problems, specifically when it comes to the character Barb.

Barb is a minor character killed by the Demogorgon in the early episodes of the first season. Unfortunately, her death and disappearance didn’t seem to bother anyone all that much, including her parents, and her best friend Nancy was left to try to find Barb on her own. Barb’s death wasn’t just written off by most of the characters; it felt written off by the show itself, and what made the whole thing worse was the fact that she was a bit queer-coded, and we have a huge problem with burying our gays. It wouldn’t have fit in with the story for Season 2 to bring Barb back to life, so instead, the show did the next best thing. Barb’s death and its cover-up by the government is given the respect it deserves. Unaware of their daughter’s death, we see Barb’s parents spend all their money and put their house up for sale in order to pay for a private investigator to find Barb and bring her back home. Nancy, despite being sworn to secrecy over what happened, manages to procure some incriminating evidence against the people who covered everything up. She teams up with the investigator and they expose the truth. Barb gets her deserved funeral, Nancy and Barb’s parents get some much-needed closure after all the emotional drama they just went through, and the people responsible get a big “fuck you” from both the characters and the narrative. Rest in peace, Barb, you will be missed. I will see you in the afterlife. And by afterlife, I mean fanfiction. 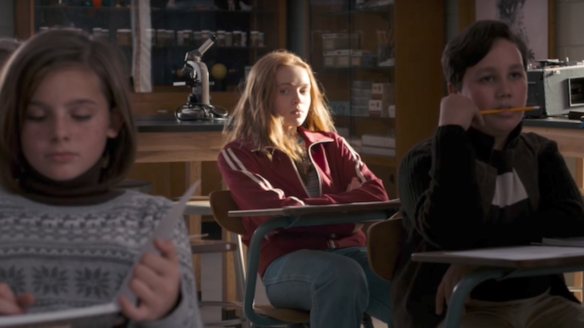 As for the themes of morality and family, Season 2 really delivers on this. To start, we’re introduced to two new characters who I really liked. We’ve got Max, a new girl who just moved to town and who’s better at gaming than Mike and his friends and becomes a member of their party. And then we’ve got her older brother, Billy, who is quite possibly a sociopath. The way the story introduces them and attempts to keep their backstory a secret till near the end of the season left me wondering whether or not either of these characters were tied to the Upside Down or Eleven in any way. It turns out, though, that their presence has much more to do with the theme than the plot.

To start, we’ve got Eleven. After finding her way back to the real world, Eleven is adopted by Chief Hopper, but their relationship is super bumpy. Hopper, still upset over his daughter’s death, is unfairly harsh on Eleven, prompting her to run away and find another girl with psychic powers. Kali, also known as Eight, was experimented on in the same way as Eleven was. The two of them call each other sisters, but Kali is angry over what happened to her. She believes that settling down with Hopper won’t offer Eleven anything, that she needs to live life for herself. At the same time, however, Kali spends her days hunting down and murdering the people who experimented on them, and it’s a life she tries to rope Eleven into as well. Throughout her journey, Eleven realizes that’s not what she wants. She’s angry over what happened to her, but she doesn’t want that anger to come at the expense of all her friends and Hopper. In the end, she decides to leave Kali behind and go save her friends from the Upside Down, and in the process, she has a heart-to-heart with Hopper and the two settle their differences. At the end of the season, her adoption is official, even though Eleven’s journey allowed her to meet both her biological mother and Kali. It is Hopper and a life without murder that she chooses. 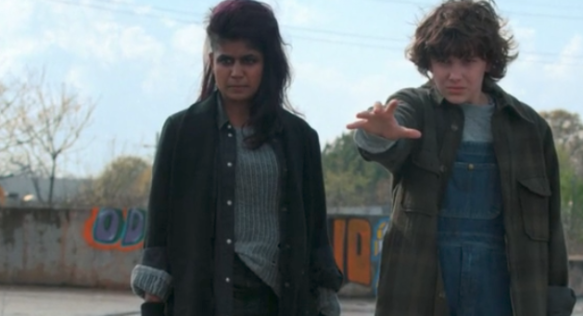 Sure did love Kali’s character, though, a girl of color, getting shoved into a villain role in the whole one episode she was in. (via Elite Daily)

In terms of family and connection, we even get a bit of a relationship between Dustin and a baby Demogorgon. Dustin finds the slug that Will vomited up at the end of the first season and raises it by himself. He names it, bonds with it, and doesn’t realize how dangerous it is until it eats his cat. It’s only then that he realizes it needs to die. Unfortunately, it gets away, but due to its relationship with Dustin, he and a bunch of other characters are saved from death later on. Despite being connected to a hive-mind, this Demogorgon recognizes Dustin, refuses to attack him and his friends, and lets them go. Its death at the end when it’s cut off from the rest of the hive-mind is even kinda sad, and I was not expecting that. We last see a shot of it curled up with a candy bar Dustin gave it.

And that brings us back to Max and Billy. In the first season things were pretty clear—the real world is good and the Upside Down is bad. With the humanization of Dustin’s pet, though, comes Billy. While Dustin found some good and redeemable qualities in a Demogorgon, Billy is a human character who is pure evil. Both Billy and Max are abused—Max, as a result, lashes out at people in defense. She’s put up walls and hates how she drives people away from her. It’s through Lucas and Dustin that she finds new friends and learns there are people she can open up to. Billy, meanwhile, lashes out at people because he wants them to hurt. It’s implied that he’s murdered someone, and he tries to hurt Lucas and nearly kills Steve at one point. Billy represents the evil of humanity—it’s not just the Upside Down the characters have to worry about, it’s people like Billy as well. I usually hate this type of black-and-white character, because more often than not, I find them boring and flat. Billy’s interaction with the theme, though, is well thought out and well executed. His character serves a purpose and in some ways he was scarier than the Demogorgons.

Season 2 was fairly well-written and although it wasn’t perfect by a long shot, we got to see all the characters grow and progress in compelling ways. Even characters I didn’t like, such as Steve, got to develop in authentic ways that made his character more dynamic. I don’t want to give away too much about the plot, because I kind of worry that spoiling those will ruin the suspense, so if you haven’t watched the second season yet, please do. I loved Stranger Things Season 2. It’s not often that my critical self has more praise than negatives for a story, and it was so nice to write a positive review for once. Stranger Things is a fun story that learns from its mistakes and I can’t wait for Season 3.