This week’s Web Crush is one of those “I can’t believe it took me this long to write about this!” type of deals, since I’ve been reading and rereading and sighing over this webcomic for months now—but let me back up a little and actually introduce it. Today I want to tell you about a sweet little thing called Check, Please! by Ngozi Ukazu. It has cute art, soft bros, young men falling in love and having a healthy relationship, and for those of you who are into that sort of thing—ice hockey.

But let me elaborate (with some spoilers!) below.

END_OF_DOCUMENT_TOKEN_TO_BE_REPLACED 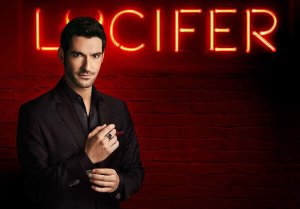 Today’s topic came about from conversations I’ve been having with Lady Geek Girl. We both love Lucifer, the TV show which follows the devil’s shenanigans in L.A. and which just returned for its second season. I enjoy the show because I’m a sucker for procedural shows and I have a lack of immunity towards charming jerks. But today I want to talk about one matter that both intrigues me and worries me—how the portrayal of Lucifer’s masculinity relates to the fact that being near one specific woman makes Lucifer, who otherwise cannot be harmed by humans, physically vulnerable. What intrigues me is how Lucifer deals with the emotions this causes, but the potential messages of toxic masculinity and misogyny are quite disconcerting.

Some mild spoilers for the show below.

END_OF_DOCUMENT_TOKEN_TO_BE_REPLACED

It’s rare that I admit this, but I was way wrong about Thor.

When it was first announced that the new Thor was to be a lady, my initial reaction was “of all the heroes to genderbend, why pick one that is ‘supposed to be’ a guy?” I worried that it was a publicity stunt and would be set up for failure, setting back future efforts. Then I noticed all the comments about it and how they were almost uniformly of the rabid anti-feminist troll variety. Any time I find myself expressing an opinion shared by the “red pill” types, I immediately reexamine that viewpoint, and I’m so glad I did!

When I started reading The Mighty Thor, I realized not only was I mistaken in my assumption that Thor was a poor choice for a high profile genderbend, but that Thor was in fact the perfect choice. I am glad I was so incredibly wrong because I am excited about the Thor quadrant of the Marvel universe for the first time since I was a kid. Judging by the fact that this run of Mighty Thor has been selling consistently well since its release, I am not alone in that opinion.

Very quickly, about two issues into the first arc, it became clear that not only was the choice to have Thor portrayed by a woman very deliberate, but it was a way to jump right into the midst of the pushback to inclusiveness and hit it squarely in the face with an all-powerful magic hammer. Not only does this series perfectly nail (see what I did there) the fallacy of these arguments against a more diverse base of main characters, it exposes their root: fear at the loss of “straight white male as default”.

END_OF_DOCUMENT_TOKEN_TO_BE_REPLACED

If you have not yet seen the short film Sunspring, you’re missing something fascinating, bizarre, and potentially historic. It is a sci-fi short script written entirely by an AI named Benjamin. Specifically, Benjamin is a type of neural net called “long short-term memory” that is most often used for high end speech, handwriting, and text recognition. In the case of Sunspring, it was fed a few dozen classic sci-fi scripts (full list shown in the movie’s titles) and told to write its own short, which the human creative team then attempted to faithfully produce.

The results are… interesting, to say the least. While the stream-of-consciousness style of the language has drawn comparisons to the “cut ups” of William Burroughs or even some of the works of James Joyce, there is also a fair amount of straight up gibberish as well. In fact, what makes the film so interesting is that the majority of the meaning cannot be attributed to the “intent” of the AI author but rather the creative interpretation of the actors and directors. Sunspring is a type of collaboration between performers, viewers, and an AI all trying to pull together a coherent narrative by “reading the tea leaves” of the patterns common to sci-fi stories.

“He is standing in the stars and sitting on the floor.”

In many cases, these patterns are essentially tropes. The fact that an AI recognized this and incorporated it into a script is worth examining, as this seems to speak volumes about the genre itself. For the purpose of this article, I am choosing to focus on the gender narrative and what it says about sci-fi culture and the role of gender in the geek zeitgeist.

END_OF_DOCUMENT_TOKEN_TO_BE_REPLACED

I still have Star Wars on the brain, and even if I was cooling down from the Star Wars hype, it was immediately rekindled by the Rogue One trailer and the recent release of the The Force Awakens DVD. But I’m not here to talk about any of the new Star Wars movies. A while back I talked about my favorite Star Wars installment in the franchise, The Empire Strikes Back, and now I am here to talk about my second favorite, Return of the Jedi.

END_OF_DOCUMENT_TOKEN_TO_BE_REPLACED

A few weeks ago I wrote about raised female warriors and their fight for autonomy. Since then I’ve been thinking on whether male characters are ever given a similar kind of tragic backstory where they‘re kidnapped, as children or even as adults, and their agency is taken away and they are forced to learn to fight and kill on the orders of their captors. I managed to find a few that could fit this trope—Matt Murdock (Netflix‘s Daredevil), Oliver Queen (Arrow), Bucky Barnes/the Winter Soldier (MCU), and D‘Avin Jaqobi (Killjoys). All these characters have their freedom and autonomy taken away (to differing extents) and, as such, they present a lot of opportunities for nontraditional portrayals of masculinity.

Spoilers for Arrow, Killjoys, and Captain America: The Winter Soldier below.