So… there’s a new 300 movie out. And apparently it’s killing at the box office. Yep. So let’s talk about the trailer, I guess.

This movie… I just don’t have words. Why does this movie exist? I actually really liked the first 300 movie. I thought it was well shot and the acting was pretty good. Yes, it was racist, ableist, and sexist, but when I turned off my critic brain I was, admittedly, entertained. The way the movie ended was perfect, so once again we have Hollywood making unnecessary sequels just so that they can make some more money. 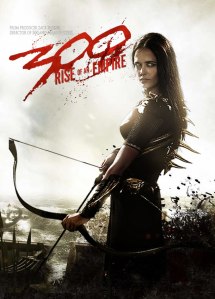 Based on the trailer I can see why the movie is doing so well—it’s flashy, action-packed, and filled with dudebros—but that doesn’t mean it’s actually any good. For one, this sequel seems to be hanging onto its sexism, starring a very limited female cast of what seems like only two women. One of them is Queen Gorgo, who was in the last movie, and now we have an evil female character in the form of Artemisia. Artemisia is apparently a real person, which I didn’t know until recently, so thank you, movie, for teaching me something. Artemisia is also a real bad guy (from a Greek perspective anyway). She was a Greek who joined Xerxes’s forces and led a naval force against the Greeks. However, with her inclusion, we once again have been given women who fulfill two of the biggest female tropes: the noble faithful wife and the evil woman. Not that the original 300 was ever a bastion of feminism, but if they were going to do a sequel, did the writers have to include some evil woman instead of an awesome Spartan woman who is actually fighting and not being sexually assaulted? It’s good that the movie has more than one woman, but historically, Spartan women were actually pretty liberated for their time. Spartan women were known to be just as fierce as the men and were also trained in combat. I would have preferred seeing some Spartan women fight (like a whole Spartan woman army) instead of just these overused tropes that do the Spartans an injustice.

On top of this, we have the special effects. In the last movie, the filming and effects were pretty epic. Yet this trailer makes it seem like they’ve gone a bit overboard with said effects. Most movies do, nowadays, but that’s no excuse for this movie to do it as well. The clips of the naval battle don’t even look real. In fact, nothing about this movie looks real. Yes, the effects in the last movie were also very surreal, but the special effects have been amped to the point where this is practically a cartoon. Pirates of the Caribbean did better at naval battles.

I will, however, say this: the last movie was entertaining as long as you turned your brain off almost completely, so I’m assuming this one will be about the same. So go see it, I guess… just maybe be a little drunk when you do. Or wait for the DVD.