Baby-having. It’s traditionally one of the societal markers of womanhood—women are supposed to have uteruses, and men aren’t, and if you’re a woman and fail to successfully grow a baby, for whatever reason, that makes you a failure at your gender.

I’m a cis woman, and society has told me from the get-go that one day I’ll be giving birth to the next generation. I spent the first eighteen or so years of my life plotting out elaborate (and often fandom-based) names for my future kids, and now today, when I tell people I don’t really know that I want children after all, I have to qualify it with a reassurance that I might change my mind—before they assure me that I will.

What this boils down to is gender essentialism. This method of thinking boils women down to what thousands of years of society says is woman’s defining trait, and sets that above everything else. Women who can’t have children are referred to as “barren”, a negatively connotated word which calls up desolate fields in which nothing living grows. (There’s no equally negatively connotated word for men—“sterile” just suggests cleanliness.) 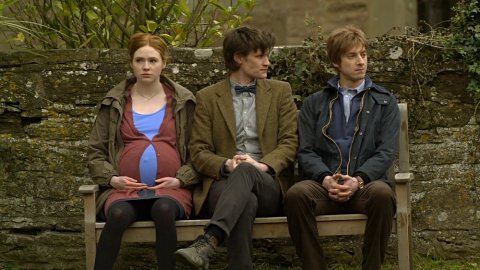 Steven Moffat is so, so guilty of this.

It also moralizes the existence of women without uteruses or without the ability to bear children, making sterility into an issue of good and bad rather than just an apolitical medical condition. Trans women exist; they can’t bear children. Cis women who have had hysterectomies for personal or health reasons, or who are infertile for other reasons, can’t bear children. They are not any less worthwhile, or any less women, for this. Unfortunately, pop culture seems to disagree.

Spoilers for Avengers: Age of Ultron, Orphan Black, and Series 7 of Doctor Who below the jump.

END_OF_DOCUMENT_TOKEN_TO_BE_REPLACED

So there are only Davison days left till the big premiere of Series Seven, and the wait is, I’m sure, killing all of you in the same way it’s been killing me. But to tide you over for those last five turns of the Earth, we have been granted Pond Life by the BBC. Pond Life gives us a glimpse into what it’s like to be Amy and Rory—when the Doctor isn’t around. These five one-minute episodes will be premiering every day this week. Be sure to keep an eye out here for the other four, and enjoy your first taste of Pond Life!