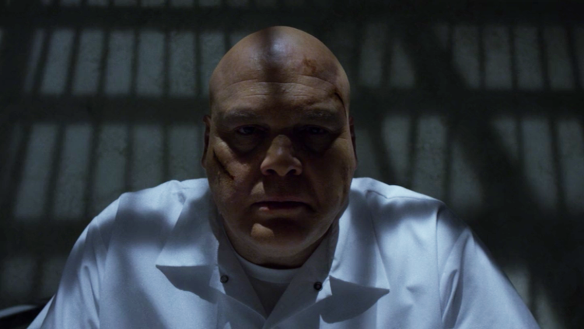 It means that I am not the Samaritan. That I’m not the priest, or the Levite. That I am the ill intent who set upon the traveler on a road that he should not have been on.

Wilson Fisk transformed the villain’s role in the Marvel Cinematic Universe. He is not an evil robot, or the head of a vast conspiracy, or an ancient god of chaos. His life story is not the tale of a festering wound inflicted by the hero. He’s not even a Nazi. Wilson Fisk is a purely human force. He has no magic, no powers, no wondrous technology—nor does he seek to acquire any. He lacks the kind of megalomania that drives others to take over the world.

He relies on human powers: money, muscle, and connections – powers which can be leveraged through his knowing white privilege. He ascends as populist dictators do, staying within the boundaries of the elite as he consolidates power.

His basic desire is chillingly simple: dominance. He aspires to wrest the chaos of Hell’s Kitchen into an orderly fiefdom, where the demolition of all opposition will mean that at last, the trains will run on time. And he’s not the only burly bald man to harbor such ambitions.