Say you’ve begun a new religion. Congratulations! Now you need followers. You could stand on a street corner and shout at people. You could serve the poor and provide for those in need, attracting people with your kindness and generosity. If you’re powerful, you could compel them by law to convert. But those aren’t very effective ways of getting your religion to spread far and wide and really stick. I know what you need: a religious text! Yes, a holy book is exactly what you need to reach people out of shouting range and to make sure people don’t garble your message in our great divine game of telephone.

Most actual, real-world religions have some kind of holy text, but it’d be a mistake to think that they all treat their text the same way, or that members of the same faith treat their same book the same way. Scholars call the way people interpret a text a “hermeneutic” (her-man-OO-tic). If you’re going to understand a religion that has a text, you’ve got to understand the different kinds of hermeneutics you might run into. To do that, I’m going to show you how similar hermeneutics pop up in our geeky fiction.

END_OF_DOCUMENT_TOKEN_TO_BE_REPLACED

I typically start watching a show years after it debuts, and then catch up in binge-watching bursts. True Blood is no different, so while Season 5 is new and fresh for me, it actually aired two years ago. As someone who enjoys thinking critically about religion, this season really stood out for me because a main plotline was the role of religion in the vampire community. The show posits a sort of vampire ethnic religion, complete with scriptures and its very own divinity, Lilith. The name “Lilith” has been given to approximately three bajillion various characters in genre media, but Lilith on True Blood was pretty specifically delineated. She is an ancient being who blurs the lines between messiah and deity, worshipped by a segment of the vampire population who call themselves Sanguinistas. After the jump, I’ll get more in detail about the rich religious parallels this season offered. Major spoilers for Seasons 5 and 6 of True Blood. 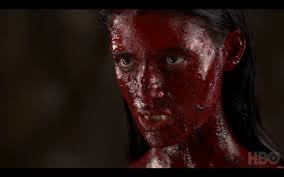 END_OF_DOCUMENT_TOKEN_TO_BE_REPLACED

So here we go, the first of my End of World posts. Let me start with this disclaimer: I am not, in any way, shape, or form a Biblical literalist. I find taking the Bible literally impossible. I don’t know nor do I understand how people are able to take the Bible at face value. That being said, most Americans tend to take the Bible literally, and that’s reflected in our pop culture, especially when we talk about the apocalypse.

To say that the Bible is problematic when it comes to the portrayal of women is like saying that Jack Donaghy is awesome. In other words, it’s an understatement. Now don’t get me wrong; there are many good women in the Bible, but there are many more evil ones. These evil women are often instruments of the devil and, of course, key parts of the apocalypse, so they make their appearance a lot in these types movies, TV shows, and books.

In this way Supernatural invites its viewers to see the harm in blindly flowing something they don’t understand. Those being manipulated by the Whore do so out for fear for salvation. They are so scared of not being saved they are willing to kill people in order to do it. In this way, the show uses the Whore to point out the real sin that is condemning them to hell. It’s not drinking or premarital sex, but hypocrisy and judgment. In the end, Dean kills the Whore and those following her ask the question, “How will we be saved now?” The answer is they have to figure it out for themselves and that the path of righteousness is a hard one filled with difficulty and questioning, not blind faith.

Supernatural managed to take what could have been a very sexist trope (the evil woman) and turned it into a more complex message about religion, allowing them to elegantly side step some of these gender issues that show up in the Bible. There are many other evil women we could talk about in Supernatural, but they pretty much all die before the apocalypse, so we’ll limit it to this one evil lady.

Stephen King’s The Stand is another great apocalyptic story. For the purposes of this article, though, we are going to stick with the TV miniseries. Why? Because I have yet to read the book, and because the miniseries is awesome.

In The Stand, Larry Underwood meets the young, beautiful, and mysterious Nadine Cross. Both Larry and Nadine are attracted to each other, maybe even in love with each other, but Nadine refuses to engage in any sort of sexual activity with Larry, because she keeps on having visions of Randall Flagg. Randall is actually Satan in human form. Through his seduction, Nadine makes terrible choices, which leads to the death of several of the protagonists. Randall Flagg tempts Nadine and draws her too him, eventually they have sex and Nadine becomes pregnant with, presumably, the antichrist. Nadine repents of her actions and rebels against the devil in the only way that is left to her—she kills herself and the baby.

From a feminist perspective, this could potentially be a terrible portrayal of a woman. Nadine is a strong woman that wants great things for herself, but in her pursuit of those great things she ends up getting in over her head and destroying herself… yep. On the other hand, however, Nadine’s character is very human and compelling. Nadine struggles with whether or not she should pursue her own goals or help other people. She does ultimately fail and chooses the wrong thing, but she realizes what she did wrong at the end.

The only problem I really have with Nadine’s character is that at the end when she realizes what she did was wrong she kills herself. This isn’t exactly the type of message I think we need in our pop culture, especially in one with religious overtones. The harder path, the better one, would be for Nadine to live and try to work against the devil, to actively make amends for what she has done. By having Nadine commit suicide, her story becomes completely tragic, which I’m guessing is what Stephen King was going for, but personally I think the story would be more complex and interesting had Nadine lived.

Nadine, like many evil apocalyptic women, is there for one reason: to bring one of the most important apocalyptic figures into the world.

Next time on Oh, My Pop Culture Jesus: The Antichrist.

Tune in next time and get some religion!