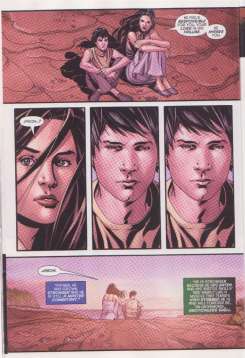 There is a special place in my heart for just about anything Silver Spider writes, and this isn’t the first time we’ve recommended fics by her. The Choice of Family remains one of my favorite series on fanfiction.net, and The Changeling and its sequel, The Guardian, are currently ranked pretty high on my list as well. However, The Guardian is a post for another time. For now, let’s just talk about The Changeling. Yes, this is another Jason Todd story.

The Changeling is an AU fic that starts during the first issue of The Red Hood: Lost Days. Jason is still in a semi-catatonic state after his revival, but due to reasons, Ra’s al Ghul is away, meaning that when Talia throws Jason into the Lazarus Pit to jump-start his memories, Ra’s is none the wiser. This allows Talia to keep Jason around at her mansion as a captive for the next couple months. During his time living with Talia, Jason, who naturally wants nothing more than to get back to Gotham and Bruce, makes a startling discovery: Bruce and Talia have a son, Damian, that Bruce knows nothing about.

Potential trigger warnings for rape and suicide ahead.