¡Feliz Día de los Muertos! It’s November 2nd, known commonly in Christian liturgical calendars as All Souls’ Day, and frequently in Hispanic countries as Día de los Muertos (Day of the Dead) or Día de los Difuntos (Day of the Deceased). Festivals to honor the ancestors are a universal cultural phenomenon, but the expression of “Day of the Dead” in the popular imagination with its characteristic trappings is a confluence of folk Catholicism and pre-Christian Mesoamerican (Aztec in particular) indigenous traditions from parts of Mexico. The 2014 American film The Book of Life, which just opened a few weeks ago, is a rollicking romp set with this backdrop of Mexican Day of the Dead celebration, directed and co-written by Mexican animator and creator Jorge Gutiérrez. Though I am of a different Hispanic descent (Ecuadorian to be exact), I was excited to see a children’s movie celebrating any Latin American culture when the vast majority have backdrops of European folklore. I went in hoping for a lot, and left disappointed and offended. 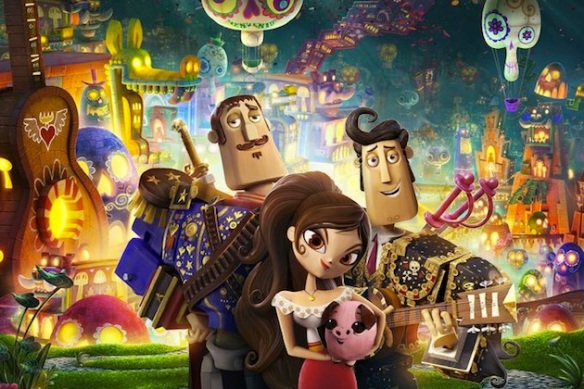 END_OF_DOCUMENT_TOKEN_TO_BE_REPLACED

Last year when I was frantically working on my Master’s Thesis (yes the caps are necessary) for grad school, I turned on Netflix and put on the movie ParaNorman. I just wanted something on in the background that would be enjoyable, but wouldn’t distract me too much. I had wanted to see this movie for a while and felt that now was the time. Well, I didn’t work on much of my thesis that night, but I did watch one of the greatest children’s movies that I have ever seen in my life.

END_OF_DOCUMENT_TOKEN_TO_BE_REPLACED

I am so excited for this movie I can’t even contain my joy!

Despicable Me 2 brings us the return of Edith, Margo, Agnes, and their now formerly villainous parent, Gru. I’m not sure what Gru is doing now that he is no longer villainous. The trailer kind of implies that he has been out of the game for a while. I hope we get to see Gru working some tedious normal job so that he can make enough money to raise the girls. Whatever the case, it will be nice to see three of my favorite young female characters.

For a brief second I was excited that Margo asked why it mattered if she was texting a boy or a girl, because I thought that maybe there would be some young love between her and another young girl, which would be awesome. There are so many movies for kids that stress heteronormativity (like every Disney movie ever), which can makes things really awkward for LGBTQ kids growing up, since they never see any sort of relationships that apply to them. It’s time for a kids movie or show, or whatever to step up to the plate and makes this a reality. It’s time. Sadly, the trailer doesn’t suggest that Margo may be in love with a girl, but it doesn’t preclude the possibility either—though I’m probably just projecting my own desires on to this brief scene.

We also have an awesome new red-headed female character named Lucy, played by the equally awesome Kristen Wiig. At first I thought she might be acting as the bad guy in this film, but the trailer seems to imply that they will actually be allies. So yay! New female character!

So yes, beyond excited for this movie. If I were you, I would go see it come July.

This movie looks good fun and interesting along with awesome stop motion animation. My only problem with it is it has been done before. I know it sounds weird to say that a movie has been made about a Frankenstein dog has been done before, but it has, by none other that Tim Burton himself.

The 1984 thirty minute movie live action version of this movie was cute, fun, and entertaining a Tim Burton classic. I happen to enjoy a lot of Tim Burton’s movies, but I noticed a trend with Tim Burton. He tends to be better with his own original works than remaking classics. I honestly did not enjoy Willie Wonka and the Chocolate Factory or Alice in Wonderland, and many people felt the same way. Now with a remake of one Tim Burton’s old classics coming out I have to wonder if he’s maybe losing his touch, especially considering he hasn’t written anything new since Corpse Bride in 2005.

This remake of Frankenweenie looks great, but the old one was fine it didn’t need to be remade. I just wish Tim Burton would try to do something original again instead of another remake, even if it is a remake of one of his original stories.