2016 may be a shitshow, but at the last moment, anime seems to be conducting a noble effort to make the end of the year a bit sweeter. Freshman on the sports anime scene, Yuri!!! On Ice, appears to have skipped the typical queerbaiting of its predecessors and jumped right to a heartwarming portrayal of a healthy relationship between two bisexual men (fingers crossed this won’t get fucked up as it approaches its final episodes); unable to keep himself from his passion, Hayao Miyazaki has stated he’ll return from retirement for just one more feature length animated film with Studio Ghibli; and both Spirited Away and Sailor Moon R: The Movie are getting theatrical releases, Spirited Away in early December and Sailor Moon in January. As I’ve traveled back home for the holiday season, I’m about 90% sure that none of the theaters in my little town are going to be showing either of the two animated films. Like that would stop me, though. 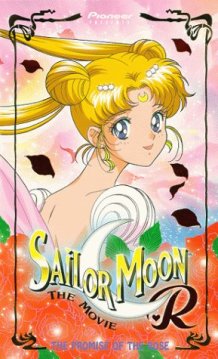 Out of the Sailor Moon filmography, I remember watching Sailor Moon R—subtitled Promise of the Rose in the North American release—back in the wee days of my youth, and as such it shouldn’t come as much of a surprise when I say that it’s hands down my favorite of the three. Aside from the rose motif, little me adored the flower-based baddies and the romantic triangle that had a satisfying conclusion. Older me sat here not even a day ago reminiscing about the film wondering, “did this movie even have a love triangle?” I’m not doubting the shoujo genre or glossing over its flaws, but I watched the dub of the movie, and if there’s one thing I remember about the early dub of Sailor Moon, it’s that anything pertaining to not being straight typically had a shoddily woven rug thrown over it in hopes that the kiddies wouldn’t notice. And the potential love conflict between Darien, Serena, and the antagonist Fiore would have had almost inescapable implications of homosexual love between Darien and Fiore. Yet, upon watching the film again and keeping an eye out for this, I found that Fiore’s feelings probably weren’t intentionally glossed over. Furthermore, while the American dub may actually be gayer than the original Japanese, the ambiguity isn’t necessarily a bad thing in this case.

Note: since I’m mainly speaking of the dub, I will be using the names from said original dub.