Recently, in honor of Twilight’s 10th anniversary, Stephenie Meyer released a genderbent version of the book called Life and Death: Twilight Reimagined, which I have not read and will only read if I find myself really desperate for new material to write about. But considering that Star Ocean 5 is almost out, I just watched Gotham Season 2, and Game of Thrones’s latest season is about to finish up, that’s not going to be a problem for me anytime soon.

Since I haven’t read Life and Death, I only know about it through what other people have told me—and it’s been nothing good. Part of the reason Stephenie Meyer wrote this book was to address the complaints people had about sexism. Almost immediately, I knew she wouldn’t be able to succeed in her endeavor and that Life and Death would just be another rehashing of the same sexist garbage. This is because, from reading Twilight, I’m going to guess that Stephenie Meyer clearly has no idea why Bella’s role in the story is sexist, especially because the sexism could have easily been fixed without changing any genders at all.

END_OF_DOCUMENT_TOKEN_TO_BE_REPLACED

Sometimes when we’re following a story we come to the startling and awful realization that our protagonists are horrible characters. Maybe they’re not written very well, or given a good role in the story, or maybe they’re just terrible people. Whatever the case is, some protagonists are just unlikable. And that most certainly is not supposed to be the case as often as it is. The other day while replaying Star Ocean, I got to thinking of all the horrible protagonists out there that I am supposed to like, and I came to a not very startling conclusion: most of them are cishet, white men who are also full of entitlement. This is not the case for all unlikable protagonists—but it is the case for enough of them. And it really goes to show just how boring and generic our stories are, since there is very little variation in this character type. As such, I decided to compile a list of my Top 5 worst protagonists who I am supposed to like, but who are really just giant assholes.

END_OF_DOCUMENT_TOKEN_TO_BE_REPLACED 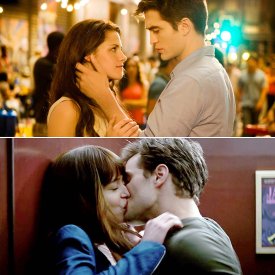 Twilight and Fifty Shades of Grey are two of the most polarizing books that I have ever been unfortunate enough to read. It’s important to remember that it’s all right to enjoy something with problematic material. You just need to be aware of why it’s problematic. I’ve read and liked a lot of stories about abusive relationships—even recced a fic or two—but the biggest difference between reading fanfiction with glorified abuse and the Twilight and Fifty Shades books are that these fic authors are actually aware that their stories feature abuse and use disclaimers accordingly. Fanfiction is also often less about telling a cohesive story and more about expressing interpretations to already preexisting works of art. It’s not the same as writing for cash and putting a copy of their work in every bookstore out there. Stephenie Meyer and E. L. James don’t seem to realize the abuse they wrote, and what concerns me about their novels is that they do trick real people into believing that abuse—sometimes even rape—is a sign of love. Both these stories are incredibly misogynistic. They mistake abuse for love, sometimes even use love to excuse abuse, while also encouraging male entitlement and female submission.

Spoilers for both Twilight and Fifty Shades below, as well as a trigger warning for suicide, abuse, rape, and unhealthy relationships.

END_OF_DOCUMENT_TOKEN_TO_BE_REPLACED

So I don’t know how many of you may have noticed, but most fictional women seem to be motivated by one thing: makeup.

Obviously I may very well launch into a post on why that’s not true. But instead, let’s also talk about why it’s a damaging idea. So let me start this off with a quick backstory on myself. I’m a nerd. I’m an asexual nerd who never felt the need to seek out a man. I only got a partner eventually because Lady Geek Girl all but super-glued my current boyfriend and I together. But as you can all imagine, it was quite a rough ride for a while. And though the two of us have been dating for almost six years now, I had never been keen on seeking a partner out beforehand.

I just wasn’t interested in it, but I felt as though I would never be happy without a guy, because according to every movie I’ve watched ever, a guy is what I needed. Lord knows, as a woman, I can’t take care of myself, so I need a man to make me happy and to provide for me.

Furthermore, believing that not wanting a partner made me the odd one out and having a skewed frame of reference from the media, I simply didn’t understand other girls growing up. Sure, I had my geeky friends and they all had the occasional crush, but I honestly believed that every other female our age talked about nothing but boys and makeup, which also made me feel as though being a non-nerd girl was very dull.

END_OF_DOCUMENT_TOKEN_TO_BE_REPLACED

I saw this and just couldn’t resist. This movie will either be awesome or just downright stupid. I’m hoping for the former. After all, who doesn’t want to watch our sixteenth president slay the undead, and hey, it doesn’t look like anyone sparkles in this movie, which is always a plus. To be perfectly honest, when I first saw this trailer, all I could think was that movie makers really are either brilliant or creatively bankrupt. This is a movie that is very obviously going to sell by simply being ridiculous, despite such a serious trailer. In order to be taken seriously, I can’t imagine that it would be that hard to replace dear old Abe with some random dude, so as to not bastardize our history for a good laugh.

Why they chose Abraham Lincoln and not some other president was beyond me until I found out this little fact right here: it is based on a novel by Seth Grahame-Smith, the author of Pride and Prejudice and Zombies, which is also getting a movie adaption sometime in the near future. Suddenly, the existence of Abraham Lincoln: Vampire Hunter made so much sense, and hell, if it’s by Seth Grahme-Smith, it has to be worth it.

Even if it’s not a good movie, per say, it’ll at least be entertaining, which is all the more Seth’s works aspire to be.

On top of that, even the book for this one has a trailer too, and unlike the Inheritance trailer, it doesn’t completely waste anyone’s time.

“Four score and seven years ago I slayed Edward Cullen.”

I realize that this trailer has probably been out for a while now, but I don’t really keep up with the hype anymore, or at all, for that matter. Unfortunately, this may not be the only time we’re ever going to see a Breaking Dawn trailer, because it’s quite possible that like Harry Potter, this may be a two-parter. Though, I’m not really sure what Breaking Dawn actually has to offer in order to make two movies.