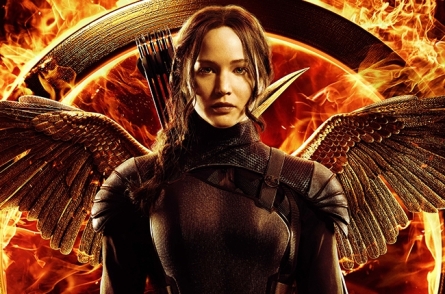 It has become clear to me that I will never have a normal theater experience. Seriously, theaters hate me. When I saw Godzilla, there was no sound. When I saw The Maze Runner, there was loud ass construction going on next door. And right before I saw Mockingjay, I got horrendously ill. This was all kinds of suck because not only was I sitting in the theater attempting to not breathe on anyone, Mockingjay was quite good and I really wanted to enjoy it to my full capacity.

END_OF_DOCUMENT_TOKEN_TO_BE_REPLACED

While the first official trailer for Catching Fire focuses entirely on the events leading up to the 75th Hunger Games and not the Hunger Games themselves, this one focuses on both. I’ve already talked about the earlier trailer here, and my excitement hasn’t decreased in the slightest.

I’ve always had some grievances with the first movie, but all in all, I thought it was relatively close to the source material, and it’s hard to ask for a better book-to-movie adaptation. So far, it looks like Catching Fire will be just as faithful. However, I am a little disappointed that we barely see the transformation of Katniss’s wedding dress in this trailer, which I’m really looking forward to see as soon as the movie comes out.

For the last trailer, I lamented that we didn’t get to see any of the other tributes, but not this time around. We get glimpses of a whole bunch of them: Finnick, Johanna, Enobaria—whose teeth look amazing, by the way—and a few others. We also get to see some of the arena, as well. This trailer reminds me a lot of the one trailer for the first movie.

They both begin with some dialogue, followed by the reaping, time spent training in the capitol, before ending with a quick shot of the contestants right after entering the arena. It’s not entirely similar, as both books do have differences in their plots, but it’s still the same basic formula, and hey, it’s a formula that works. However, I do have to admit that in some ways I was disappointed with the second book, because occasionally it felt as though I was just reading the first book all over again, except with different characters and stakier stakes. In other ways it didn’t, so I have always been a little torn on how I feel about Catching Fire. I fear that I may have this same issue with the movie. My biggest grievance with both books is that they introduced characters that I instantly fell in love with before killing them—Rue and Mags—but I’d hardly call that bad writing. The audience should care when a character dies. It should mean something.

Unfortunately, November is still a long ways off, and this movie cannot be released soon enough.