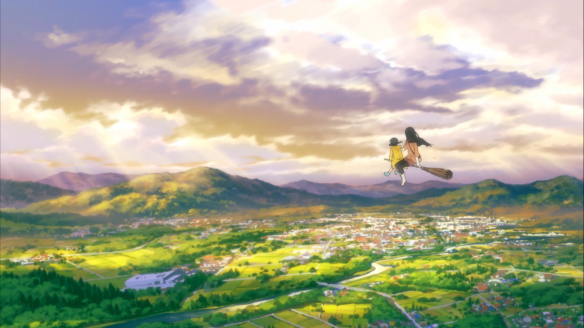 Flying Witch did for witches what Miss Kobayashi’s Dragon Maid did for dragons: just had them be kinda there, going about their daily business instead of getting wrapped up in some sort of epic fantasy plot. Makoto, the protagonist of Flying Witch, is a young witch completing her training, but is she rollicking along on some sort of Harry Potter-ish adventure attending a haunted magic school and defeating evil incarnate? No, she’s just doing the gardening. Occasionally she unearths a howling mandrake and disturbs her friends and neighbors, but otherwise she lives a relatively conflict-free existence, sitting where she does in the place where the “supernatural” and “slice-of-life” genres meet. Which is, it turns out, pretty near the dreamy land of magical realism.

Spoilers for Flying Witch Episode 11 beyond!

Flying Witch is not a show you watch for conflict and action—it’s quite literally just the day-to-day goings on of a girl’s life in a rural town, including high school cooking classes, vegetable planting, and long conversations about the history of the pancake… oh, with the occasional bit of magic woven in. There’s no overarching plot, no tension, no mysteries or intrigue as we glimpse the magical world. The witches in this universe don’t have a statute of wizarding secrecy so much as just keep to themselves because they like it better that way, which pretty much tells you all you need to know about the series’ casual tone and casual acceptance of magic. Apart from some initial shock when Mako floats on her broom for the first time (and some comedic reactions to the yelling plant), the existence of magic is basically accepted by the cast and by the story without anyone batting an eyelid.