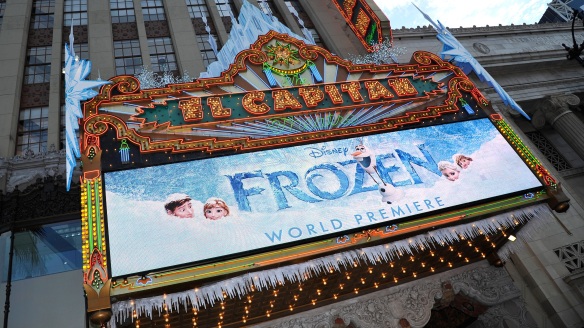 Gentle readers, as you know by now, I like to keep you abreast of new happenings in the stage world, whether they involve Zach Braff, Tom Hiddleston, or Tupac. That’s what makes me so nice. I revel in the potential when a favorite actor or film or what have you crosses genres or even mediums to arrive on the stage. This is in part because I believe theatre to be a uniquely intimate medium, so when our favorite stars or stories make it to the stage, it lets us look at them in a different light. Take, for example, the hubbub when it was revealed that Daniel Radcliffe, naked no less, would be starring in a revival of Equus. Just the idea of getting closer to one your faves is rewarding, and that’s just as true for plots as people.

Having just seen Disney’s Frozen, I have plenty of feelings about it, but if you’re looking for feels then I will direct you to one of the other several posts about here on this website. I’m content just to let you know that if you’re a Frozen fan, there’s some happy news: Frozen is slated to appear on Broadway! Fresh off of a Golden Globe win, Disney Animation intends to capitalize on its success by bringing it to the stage. The intention, it seems, is to build a great franchise on Disney Animations’s “first bona fide smash hit in almost two decades” as indicated in Fortune’s article and interview with Robert Iger, CEO of Walt Disney.