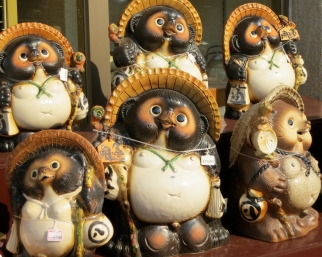 Ever since Saika’s post on fairies, I’ve been thinking about one of my most favorite mythological creatures: the tanuki. While the two are really only related in terms of having a non-human morality and magical powers, the resurgence of fairies in popular media through mediums like the Tinkerbell movies from Disney and various young adult novels makes me wonder if tanuki could hold the same sort of interest in the Western market. Not that I’m wishing for authors to appropriate a wider range of cultures, but at some point we’re going to reach an over-saturation of vampire and angel stories—authors are going to start getting creative, and I’d like to be prepared for the possible future. END_OF_DOCUMENT_TOKEN_TO_BE_REPLACED

I enjoy watching anime and analyzing it in terms of social issues and subtextual narrative content (ie: motifs, metaphors, and so forth). However, I and many other fans of the genre have an issue with the former of the two: we are not the audience. We are an audience, but many of us are not Japanese or East Asian, and thus lack a full understanding of how certain tropes affect the viewers of the intended audience. We can analyze, but only from a perspective that we have been brought up with: in my case, Western perceptions on gender and sexuality. These nurtured perceptions aren’t necessarily the best when coming to analyzing shoujo manga and anime, especially when it’s not really the American audience this genre is affecting at large. So when I decided that I wanted to take a look at Gekkan Shoujo Nozaki-kun‘s Yuu Kashima, I figured it was time to look at things from a different angle. While I’ve thought of Kashima’s character as laudable because she seems unconcerned with typical gender roles and expresses her gender identity through non-sterotypical ways, when looking at her actions from the angle of the cultural trope she fills, her character becomes a little less praise-worthy.