Luce: Well, guys, it’s been a long journey to the finale. Five years of twists and turns later, we’ve finally reached the end of the journey (or, at least, this journey) for Clone Club. But how did our favorite clones fare at this, the end of all things, and did they all make it through unscathed? Reviewing the end of Orphan Black is too much to take on alone, so I’m super glad to be joined by all of our faithful Orphan Black review team for this very last review.

END_OF_DOCUMENT_TOKEN_TO_BE_REPLACED

First of all, let’s get this out of the way: this season’s titles come from the fiery-badass poem “Protest” by Etta Wheeler Wilcox, which y’all should read. Really, it’s short.

Done? Cool, let’s get on with the show. This week’s premiere picked up pretty much right where the Season 4 finale left off: Sarah injured, Cosima reunited with Delphine, and everything happening so much with Alison, Donnie, and Helena.

END_OF_DOCUMENT_TOKEN_TO_BE_REPLACED

I always feel guilty getting behind on Orphan Black, because the show always delivers such quality content that I feel like I owe them my regular viewership. Unfortunately, my busy schedule of con-attending (and then con-recovering) left me yet again an episode behind this week. It’s always fun to do a bit of a mini binge-watch, though, and this episode pulled a lot of our disparate plot strings back toward the center of our clonetastic Gordian knot.

END_OF_DOCUMENT_TOKEN_TO_BE_REPLACED

I’ve been behind on my Orphan Black-watching, and all I could remember from last season was a confusing blur and some vague plot points. It was, therefore, a pleasure to sit down and watch the first four episodes of this season in one fell swoop this week, ending with Thursday night’s “From Instinct to Rational Control”. The storytelling this season has been on point and I’m excited to see where we go from here.

Spoilers for this week’s episode after the jump!

END_OF_DOCUMENT_TOKEN_TO_BE_REPLACED 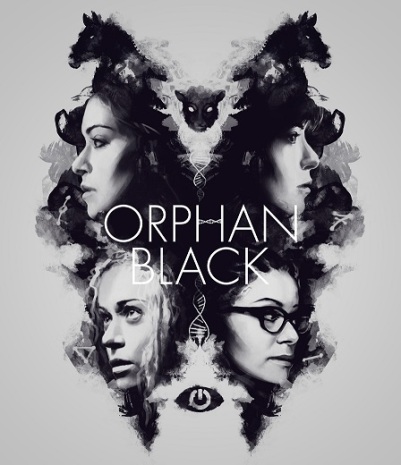 Our latest episode of Orphan Black was quite a stunner. I have a serious fear of going blind, and there’s a greater than average chance I’ll have to have some dental work done soon, and thanks to this episode, now, I… really don’t want to do that. I didn’t realize this season of Orphan Black was going to have to come with a trigger warning for body horror every single episode.

Having said that, uh, spoilers and body horror after the jump.

END_OF_DOCUMENT_TOKEN_TO_BE_REPLACED

If last week’s season premiere was a bit of a prequel, this week we’re back with Sarah Manning (and company) in the present. Last season the plot progressed into complication after complication, adding a whole new set of clones. With Season 4, it seems like we’re traveling back in time, down through the rabbit hole, back to the beginning. Two episodes in, it seems like a good choice. So what are Sarah, Alison, Cosima, Helena, and the lot up to?

END_OF_DOCUMENT_TOKEN_TO_BE_REPLACED

A while ago we had a post discussing female protagonists who are being watched over/controlled by men/patriarchal organizations. Buffy The Vampire Slayer and Orphan Black were primary examples. Today, I would like to expand on the ideas of that post and talk about a subset of this type of female characters—female characters who are not only overseen by men/organizations (often patriarchal, though perhaps not always) but are also raised to be killers and assassins against their will. I’m a bit torn when it comes to this type of character. On one hand, these women are complex and their tragic backstories allow for character development and growth. But on the other hand, the misogynistic undertones in their arcs are troubling.

Spoilers for Orphan Black, Killjoys, Firefly, and Doctor Who below the jump. Also, trigger warning for child abuse and self-harm.

END_OF_DOCUMENT_TOKEN_TO_BE_REPLACED

Well, this week’s super-tense episode was just chock full of revelations, and I’m kind of psyched to see what happens in the finale.

END_OF_DOCUMENT_TOKEN_TO_BE_REPLACED

Greetings, Clone Club! We’re now in the final stretch of Season 3; this episode really packs in the twists to set up the last two episodes of the season. While Alison and Donnie play babysitter, a three-way power struggle ensues between Clone Club and its sympathizers, and we get to meet a new clone! Spoilers after the jump, of course!