END_OF_DOCUMENT_TOKEN_TO_BE_REPLACED

Elementary, the modern Sherlock Holmes adaptation set in New York, had many Sherlock Holmes fans, such as myself, eying it suspiciously at first: not only did it move the setting from the iconic 221B Baker Street in London, but it introduced a reworked Watson character—the ex-surgeon turned sober companion, Joan Watson (Lucy Liu). However, Elementary quickly established itself as a clever, subtle, inclusive, and all-around amazing show and an exciting new take on Sherlock Holmes canon, while Joan Watson became one of the most complex female characters on TV right now. She‘s a role model in ways that you don‘t often see on TV. I want to talk about one such aspect of her character which is particularly important to me—what Joan Watson can teach us about looking for and finding what one is meant to do in life. END_OF_DOCUMENT_TOKEN_TO_BE_REPLACED

Sherlock is rarely hesitant and seldom tactful, but there’s a tentative quality to his tone when he says, “You’re not… falling for her are you?”

“What? No!” She’s suddenly aware of how high-pitched her voice has become and she shakes her head, annoyed at herself. “No. That’s insane.” And it is. Completely.

He continues despite her protest. “Because I’m well aware of the allure she possesses.” And here, his face takes on a wistful expression, as if recalling some memeory that Joan desperately hopes he won’t share. He doesn’t, and instead says, “But, you must remember that the pull she exerts is not unlike that of a black hole. She will suck you in, but ultimately leave you empty and decimated.”

Joan’s first instinct is to laugh at the absurdity of being “sucked in” by anyone, but then she thinks of Moriarty and her raptor sharp gaze. Cold steel through the heart. And she doesn’t laugh. Instead, a choking sound claws its way out of her throat as she struggles for words. “Sherlock, come on. I’m not falling for Moriarty. She sends me letters, which I ignore. That hardly makes for a successful… courtship or whatever.”

It goes against a personal code I have to recommend works in progress, but today I’m breaking that to bring you Of the Devil’s Party by Mermaiddrunk, a fantastic Elementary fic that I just couldn’t wait to share.

First, a confession: I’m painfully and deeply committed to the idea of bi!Joan Watson. While in-show I’m holding out hope for them to introduce a still-female Mary Morstan character for her to romance, I’m also intrigued by the potential for a relationship between her and Jamie Moriarty. Their in-show relationship has such an antagonistic dynamic, but Moriarty also clearly has a weird sociopathic ladyboner for Joan—like, can we talk about the giant painting of Joan’s face that she made while locked up in that warehouse? She’s pretty obsessed, and for a fanficcer, it’s a pretty easy jump from obsessed to smitten. 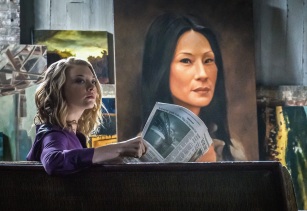 Seriously, the painting is enormous.

Of the Devil’s Party is set during the second season, after the incident with Moriarty’s daughter. Moriarty has been freed by the authorities, and heads off into the world to rebuild her criminal empire. However, after a few weeks, she starts reaching out to Joan, first through letters and then through phone calls. Joan is at first utterly unamused by Jamie’s attempts to reach out and befriend her, but the two of them eventually grow into friends. As of the fic’s more recent chapters, that friendship is beginning to develop into something romantic, much to Joan’s surprise and Sherlock’s unease. END_OF_DOCUMENT_TOKEN_TO_BE_REPLACED

Is this review incredibly belated seeing as Elementary wrapped up its second season months ago now? Yes, definitely, but let’s keep that between you and me.

Spoilers for all of Season 2 ahead. END_OF_DOCUMENT_TOKEN_TO_BE_REPLACED

I’m still working on catching up with Elementary (no spoilers, please!) but I’ve finally gotten to (and a little past) the Season 1 episode where Joan and Sherlock encounter a Chinese gambling ring. At first, this sort of threw me for a loop, because up until then I’d been enjoying Elementary’s inclusivity and non-token-ish diversity. BBC Sherlock’s “The Blind Banker” had about conquered the market on terrible representation of Chinese mafia, right? Well, yes. But fortunately, Elementary’s “You Do It To Yourself” did not encroach on Sherlock’s absolute monopoly on poor representation—rather, the episode did a far better job of handling the trope of the Chinese mafia than did its more famous cousin.

Then again, hard not to be better than this.

Spoilers and trigger warning for sexual abuse after the jump.

END_OF_DOCUMENT_TOKEN_TO_BE_REPLACED

It’s May again! That means it’s Asian-American Heritage Month, and like last year, I want to take a look at how Asians and Asian-Americans are doing in my favorite medium of TV. Some of the following are from last year’s list because their shows have advanced and they are still on said shows; it’s always good to catch up with old friends!

END_OF_DOCUMENT_TOKEN_TO_BE_REPLACED

Every Valentine’s Day, we at Lady Geek Girl and Friends vote on and compile a huge list of our favorite pairings to share with our readers. (This is not that post. Check back around noon.) However, we also always do a post that takes some of the emphasis off romantic love, because we are strong proponents of the idea that while having a significant other is cool, it isn’t the be-all end-all of life or this day in particular. We’ve listed our favorite platonic duos and our favorite unattached anime characters over the past two years, but since V-Day conveniently falls on a Friday this year, we’re taking the opportunity to share five awesome fanfics where the focus is not on romance. Enjoy!

Warning: some fics involve spoilers for their respective series, specifically Shingeki no Kyojin (and, like, Harry Potter and The Avengers if you somehow haven’t read/seen those).

END_OF_DOCUMENT_TOKEN_TO_BE_REPLACED

I’ve been reading fanfic for a long time—like more than half of my actual life-span, yikes—and when you read anything for that long you develop preferences for your favorite kinds of stories. Quite possibly my absolute favorite trope in the whole wide world is the fake-married trope. This trope usually appears when a pair need to convince a third party that they’re married and totally in love, whether it’s a side-effect of going undercover or for other reasons. It generally involves two people who, in the story, already have romantic feelings for each other, but don’t realize they’re requited. They settle into the routine of pretend marriage far too easily, and the drama comes when they realize that they don’t want to stop pretending. I adore this plot in all its forms and fandoms, but it’s also refreshing to see someone put a new twist on an old trope.

That’s where A Lopsided Symmetry of Sin and Virtue, an Elementary fanfic, comes in.

Joan thinks she should be less surprised by his sudden, “Watson, we’re getting married!” and yet, here she is, cooking her egg and trying not to be astonished.

Despite my love for the trope, I was uncertain about it in this particular fandom. The platonic relationship between Joan and Sherlock is nearly sacrosanct to me—I cling to it as one of the very few male-female friendships on TV that has never dealt with a will-they-or-won’t-they buildup. But I gave it a chance on a whim, and I was glad I did. 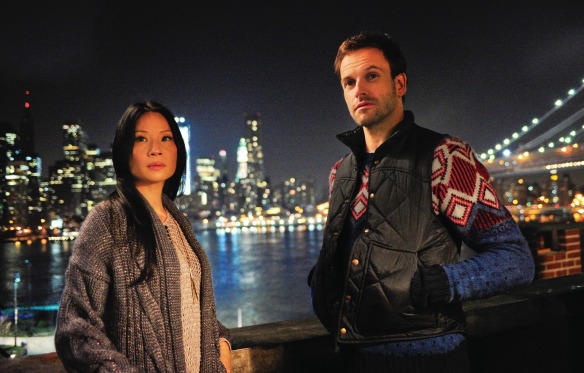 In every picture I can find that includes both of them, they are judgmentally staring at something out of shot. Idk.

END_OF_DOCUMENT_TOKEN_TO_BE_REPLACED

Hi, I’m Luce (hi luce!) and I’m an Asian-American. May is Asian Pacific American Heritage Month in America, so it’s a great time to talk about Asians, stereotypes, and representation. Let’s take a look at where Asian characters stand in today’s mainstream television media after the jump.

END_OF_DOCUMENT_TOKEN_TO_BE_REPLACED

I’ve talked about Elementary a few times before this, and if you read those two posts you know that I was slow to appreciate the show at first. So what made me go from lukewarm to squealing fangirl over the course of less than a season? 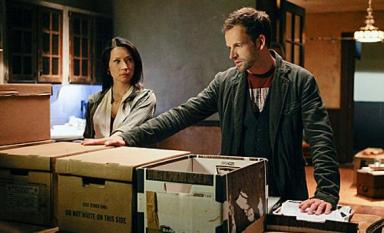