HBO’s The Leftovers does not feel like other shows. It inherited Game of Thrones’s Sunday night timeslot, but where its predecessor insisted that everything can be explained by the manipulations of the powerful or power-hungry, The Leftovers explores the disquieting possibility that the most agonizing mysteries may not be explained at all.

Set three years after a Rapture-like event caused 2% of the world’s population to vanish in an instant (known as “the Departure” within the show), the first season ponders through a year in the lives of its characters as they cope with its aftermath. The same Big Question rumbles desperately below every scene: why did this happen to us? The characters drive through each explanation and come up dry. This could not be the ascension of a chosen few—look how many were cheats and liars. This could not be a divine judgment against the wicked—how could the missing children have sinned so deeply? The rain, as it were, falls on the just and unjust alike.

To have this divine act be so removed from any divine purpose is maddening, and the characters bear it unsteadily. Nora, a woman who lost her husband and children that day, hires prostitutes to shoot her while she wears a bulletproof vest. Charismatic prophets emerge, and promise relief. Cults rise so quickly and become so threatening that the Bureau of Alcohol, Tobacco, and Firearms adds them to its title. 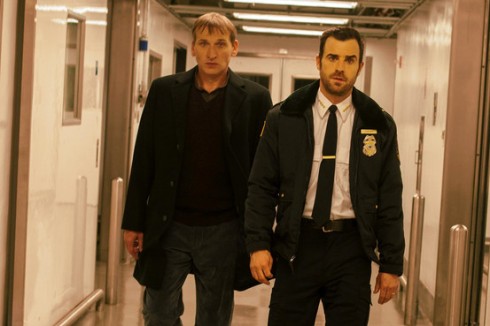 At the edge of the story stands Reverend Matthew Jamison. His suffering after the Departure feels particularly cruel: in its immediate aftermath, his wife was struck by a suddenly-driverless car. She lives, but comatose and paralyzed. The Episcopalian congregation he led before the Departure falls apart now that its answers feel hollow, and his church goes into foreclosure. A miraculous rescue attempt falls painfully short: Matt discovers a $20,000 gift from a lost friend the night before the church is to be sold, then turns it into $160,000 on four spins of a roulette wheel in Atlantic City. He overpowers a mugger in the casino’s parking lot who has noticed his new riches. Minutes away from the bank, he stops to disrupt a hate crime against members of a cult called the Guilty Remnant—the perpetrators are chased off, but knock Matt unconscious with a thrown rock. He wakes up in the hospital and resumes his mad dash to the bank—arriving moments before it closes, payment in hand, he’s told that he’s three days late. He was unconscious longer than he could have known. In a final insult, he discovers that the Guilty Remnant bought the church—and, ungrateful, they will keep it.

The hope that surges throughout that episode—a righteous man favored by fortune—pops like a balloon. Are we forsaken? The Big Question appears to have a cruel answer in this cold world.