“Do you honestly think he hasn’t figured it out by now?”

Karkat looks pointedly at Egbert, who’s talking animatedly to Roxy on the other side of the clearing. With the light filtering prettily through the leaves, they look a picture of heterosexual bliss. It’s the final shot of dozens of Karkat’s terrible Rom-coms, a textbook “happily ever after” pose with the couple giggling contentedly at each other’s jokes. Knowing those two they’re probably dirty jokes, shit you’d never say in polite company, but somehow that’s even more perfect. You want that. You want to sit with Karkat’s head in your lap and talk about bullshit until the sun sets, but you can’t because you’re a fucking coward.

It’s been a week since the dust of creation finally settled over your new paradise, and you still haven’t had ‘the talk’ with John. The ‘I like dudes as well as ladies, and that information is kinda pretty relevant since I’ve been dating Karkat over a year’ talk. A part of you wishes Egbert had the social skills to put two and two together and come up with the bright-red number four that’s been under his nose this whole time, but he obviously hasn’t. Even though you practically haven’t let Karkat out of your sight for the whole time you’ve been here, he just. Doesn’t. Get it.

“Are you kidding me?” You reply, flopping backward in a show of frustration. “Unless we start making out right in front of him, he’s not gonna notice a damn thing. He honest to God gave me a noogie yesterday and was all:

‘Jimeny jillikers, Dave! It’s great that you and Karkat are such awesome pals! I’m sorry I’ve been spending so much time with Roxy, but I’ll come hang out with you guys soon and we can have a bropalfriendfest and build a pillow fort’ or some equally dumb charming bullshit.”

You sigh, brushing your fringe out of your eyes and wondering how long the stupid victory message is going to be branded onto the sky.

“I have no idea how he’d feel if he knew what kind of shenanigans usually go down in one of our pillow forts, but I sincerely doubt he’d want to join in.”

When I went looking for a Homestuck fic to write about this week, I was just hoping to find something good. I wasn’t expecting to find one that hit me quite as personally as this one did. 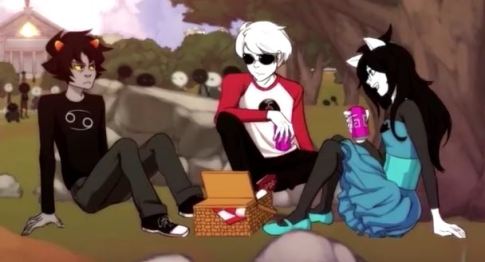 END_OF_DOCUMENT_TOKEN_TO_BE_REPLACED

I’m… leery of high school AUs. You get that early on when you’re, say, looking for good Naruto fanfiction (a nigh-impossible task) in the early 2000s. However, when I finally finished reading Homestuck for the first time a few months ago, and I turned to the two dudes who were my Homestuck fanfic sherpas looking for a quality fix, one of the first stories they offered me was Promstuck.

Promstuck is a panel-by-panel comic accompanied by a written story, much like its canon inspiration, which was illustrated by shelby and written by urbanAnchorite and Cephied_Variable. Although it features pretty much all the Beta troll and human kids and the Beta human Guardians, the plot mostly follows Karkat as he spends his senior prom evening trying desperately to man up and admit his flushed feelings—aka his huge-ass troll crush—to his hopelessly obtuse best friend John. And, in the meantime, everyone works together (to some extent) to salvage the prom from its terribly-DJed, far-too-responsibly-chaperoned, the-punch-isn’t-even-spiked sad reality.

The first time I read Promstuck was inadvisably during class a few months ago. I say inadvisably because I found some parts so hilarious that I had to try very hard not to laugh aloud. Furthermore, although I mostly ship everyone with everyone in Homestuck, John/Karkat is one of my absolute favorite pairings, so it was an added bonus that it was the focus of the fic. Outside of Johnkat, Promstuck also has a variety of pairings pale, flushed, and caliginous, ranging from Karkat<>Kanaya (another of my faves) and John<>Vriska, to the canon pairings like Jack<3<Sn0wman and Kanaya/Rose and (canonish) Dave/Terezi, to I-guess-that-could-work crack pairings like Jade/Nepeta.

The alternate universe this fic is based in began with a separate Marchingstuck story/stories (wherein everyone is part of their high school’s marching band), but I hadn’t read any of these before reading Promstuck and I don’t think you need to. Their roles in the band are explained in the story as background, and don’t really play a huge part in the prom shenanigans.

Start reading Promstuck here on tumblr, and follow the ==>’s to proceed through the story. (Who am I kidding, y’all know how these things work.) Enjoy!

Just look at that grumpy little fucker. Yes, dear readers, if you’ve stuck with me all the way through Act 4, you are finally going to be rewarded with actual knowledge about those weird grey troll characters. Let’s do Act 5 Act 1. END_OF_DOCUMENT_TOKEN_TO_BE_REPLACED