I can’t say that I was completely blown away by the final installment in The Hunger Games franchise. The movie felt a little choppy, jumped around in a few places, and had a habit of throwing characters at us without any kind of proper introduction. As Mockingjay was the only book in the franchise that I didn’t finish reading in its entirety, I found its second installment to be the most confusing of all the movies. I knew how it was going to end and I knew which characters were going to die beforehand thanks to Wikipedia, but I shouldn’t have had to rely on that in order to know who people were.

But fear not, people who really want to see Mockingjay, I would not say that the movie is all bad. Sure, it’s choppy and rushed, but it still had all the excitement that I had come to expect from it, and there were more than a few places that caused me to jump a little in my seat.

So without further ado, let’s take a look at Mockingjay Part 2. Spoilers up ahead.

END_OF_DOCUMENT_TOKEN_TO_BE_REPLACED

Darvasa, aka the “Door to Hell” in Turkmenistan. (image via wiki commons)

In Dante’s Divine Comedy, he tells us that above the gates of Hell is written the phrase: “Abandon all hope ye who enter here.” Hell is the final punishment for evildoers. The idea is that once you’re in Hell, there’s no hope for change or redemption, so you sink into despair. Hell is supposed to be the worst of all possible consequences. Hope, on the other hand, is supposed to be the thing that keeps you going even when times are tough. Many religious people hope for a pleasant afterlife for themselves and divine justice for all. Hope is one of the most powerful motivators, sustaining people through the worst of circumstances. But it’s precisely that kind of power that makes hope such a dangerous weapon in the hands of a villain, and why any Hell-on-Earth must include some modicum of hope.

Spoilers for The Dark Knight Rises and The Hunger Games below the jump.

END_OF_DOCUMENT_TOKEN_TO_BE_REPLACED

Well, I’m excited after watching this.

END_OF_DOCUMENT_TOKEN_TO_BE_REPLACED

This weekend, Catching Fire, the second in the trilogy of movies based on The Hunger Games books, finally made it to theaters. I had been really excited to see this movie, and I liked it enough that I certainly wouldn’t mind going back to watch it a second time. That said, I didn’t love the movie nearly as much as I thought I would.

I was first introduced into this series with the last movie. I liked the first movie a lot more than this one, probably because I watched it before reading its book, whereas here I did the exact opposite. I think that doing this only worsened my opinion of the Catching Fire movie.

END_OF_DOCUMENT_TOKEN_TO_BE_REPLACED

With the new trailer for the second installment of The Hunger Games trilogy (well, quartet, if we’re counting movies), Catching Fire, released at San Diego Comic Con, a renewed flurry of excitement has arisen for the series, bigger than that which accompanied the first trailer. But with the excitement I’ve noticed that people have forgotten something important about the story. Maybe they never quite realized it to begin with. And needless to say, spoilers for the last book are contained herein. 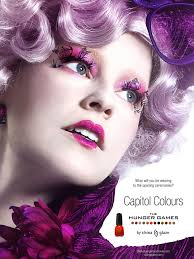 All that nail polish…

Some people probably remember when the marketing first started for the movie series, how at first it seemed clever that they were taking a leaf from the Capitol’s book. Nothing wrong with using a ready-made, glitz and glamor theme already present in the series, right? But then the grumbles started. Are they glorifying the Capitol’s decadence too much? Are people going to forget that the Capitol are the bad guys? With the new Catching Fire trailer, it’s clear that no one will forget it. Fandom crisis averted.

You’d think Tumblr would be more into Team Peele (or is it Gata?)

And everyone probably knows about the people who love to remind everyone that The Hunger Games isn’t a love story. “It’s not another Twilight!” they scream, even if it is the same production company trying to make bank off of another popular young adult series. Sure, there’s a love story, but that takes a far back seat to the political drama of the revolution. Heck, the love story is part of the revolution, isn’t it? No more Team Peeta or Team Gale. Katniss cares much more about the revolution than choosing which boy to be with. Another fandom crisis averted.

Actually… no. Katniss doesn’t care about the revolution. Yes, you read that right. Katniss is most certainly the symbol of the revolution. Her single act of desperation and defiance, refusing to “play the Hunger Games” by the Capitol’s rules, spark a fire of political turmoil. Katniss is wonderful! She refuses to be a pawn in the Capitol’s game! But from that moment on, Katniss merely becomes a pawn in the revolution’s game. No one truly considers her needs, her desires, or even what’s best for her. People simply care about how they can best use Katniss for their purposes. Every move she makes, whether in the Quarter Quell or in District 13 or on rescue missions, is tailored to fit someone else’s narrative plan. Does she get treatment for her obvious PTSD? Not until the revolution is over.

After making the decision to eat the poisonous berries with Peeta in her first Games, the only free decision Katniss makes is to kill President Coin. Katniss doesn’t care about the revolution. All she wants is to go home and have enough to eat for her and her family. That’s what we have to remember about The Hunger Games trilogy. The beauty of Katniss’s character isn’t that she is the figurehead for a huge revolution; it’s that despite being cast in such a role, her desires are simple. She just wants to survive.

The fic is set after the events of Mockingjay, so if you haven’t yet finished the trilogy  this fic will contain major spoilers. Read at your own risk.

Trying not to give too much away, since the whole premise of the story hinges on a spoiler, essentially this story tells of Katniss and Peeta coming to terms with one of the character deaths in Mockingjay. This death tore my heart out of my chest and was dealt with a little too succinctly in the book for my taste so I really appreciate this author addressing the aftermath in more detail and how these two characters get through it together.

The story is written as a first person point of view, like the novels, but from Peeta’s perspective rather than Katniss’. I’m often put-off by first person narratives (I’m still a little surprised by how much I enjoyed the books themselves) but I think feeding-geese has done a good job with the style and, much like Suzanne Collins, manages to really get the reader invested in the character through its use.

I’m not only happy with the fact that this story addresses some of the lingering problems left unresolved by the books, but even more so with the way these problems are addressed. The author has kept the characters well-drawn and true to their personalities so that this feels like a very natural continuation of the story by a writer who has a firm grasp on the source material. I can perfectly believe Peeta and Katniss in this scenario and one of the things I most appreciated was that the story, though dealing with the love between Peeta and Katniss, does not get overly romantic. Believe me, I love fluff, but the relationship these two share is pretty far from fluffy so I love that the story didn’t try to make it into something it’s not.

This is one of the first Hunger Games fics I’ve read and I’m very happy with it and look forward to more, from this author and others.

[Also can I just say how great the Peeta/Katniss shipper names are? Everlark almost literally means Eternally Happy and then there’s the giggle-inducing Peeniss. This may become one of my favorite ships for those reasons alone.]

After I finished reading The Hunger Games, I had a lot of feels. However, pretty much the last thing on my mind was shipping (a new and shocking development). And so, although it doesn’t surprise me that the dichotomy developed, I don’t really feel like I belong to Team Peeta or Team Gale. (Can I be a rebel and be, like, Team Johanna?)

Even when there were romantic moments, the books were just so much not about romance that I didn’t have any desire to go deeper into it. But I digress.

This Sexualized Saturdays is about the wonderful, the tortured, the naïve, the boy with the bread and the crush: Peeta Mellark.

Now as far as sexuality goes, I’ll put it upfront: I think Peeta is irrevocably straight. He may not have had a chance to experience any

non-hetero attraction what with having a crush on Katniss for, like, his whole life, so there’s always potential that he’s not a pure Kinsey 0, but I really don’t think so in this case.

So Sexualized Saturdays usually focuses on discussing a character with (at least arguably) a non-heteronormative sexuality, so why did I pick Peeta?

Peeta is interesting to me because of the way he performs his sexuality. While Gale is all about blowing stuff up and killing the bad guys, Peeta presents a different schema for a male lead—he is sensitive and artistic; his skills are the sort that are traditionally relegated to female characters: defense, camouflage, hell, cake decoration, and he holds a crush for Katniss unspoken for a decade—but no fan I know has ever accused him of being less of a man for doing these things. In fact, the Team Peeta cohort is expansively and massively huger (from what I can tell) than the Team Anyone Else groups. The thing that’s cool about Peeta is that he represents a role model that says that regardless of sexual orientation or stereotypes, sticking with your talents and being honest and true to yourself are the most important things. And that’s a nice break from the messages being sent by other franchises.