Redemption arcs are very rarely done well and they usually focus simply on a character doing one good deed before dying, which is supposed to make us believe that they have now become a completely better person. This is lazy storytelling at its finest, because you don’t have to do any deep character development or show the character changing in any real way. Furthermore, this storyline is unrealistic when it comes to how others respond to the redeemed character. It always amazes me that one act of kindness is enough for sometimes an entire race of people to forgive someone for a lifetime of atrocities. Everything in this type of storyline just feels very unrealistic. Thankfully, Welcome to Night Vale comes to the rescue. WTNV is pretty revolutionary and creative when it comes to much of its storytelling, but I was especially pleased when I noticed the much more nuanced way that WTNV addressed redemption arcs.

Spoilers for WTNV from Season 1 to Episode 73.

END_OF_DOCUMENT_TOKEN_TO_BE_REPLACED

Magic that fucks around with identity is, frankly, terrifying. Whether it’s something as simple as a Polyjuice Potion, which allows you to take on another person’s appearance, or something as dramatic as traveling to an alternate universe where your life is markedly different, identity magic is, at its core, an affront to autonomy. In essence, someone is using your face to effect changes in your life without your consent.

The creepy eyes are a dead giveaway, dude.

The easiest example of the evil identity thief that I could think of is, of course, from Supernatural. The series offers two different examples of magical creatures who can steal your appearance: shapeshifters and Leviathans. Both of these creatures are shown appearing as Sam and Dean while getting up to nasty business; indeed, it’s thanks to a shapeshifter that Dean was being hunted by the FBI throughout Season 3. The show also deals in body-switching and AU scenarios in various episodes, allowing the characters to run the gamut of uncomfortable situations you can experience when you’re displaced from the body and environment you’re supposed to be in. Welcome to Night Vale, not to be outdone, gave us a plethora of identity magic issues all in one episode.

END_OF_DOCUMENT_TOKEN_TO_BE_REPLACED 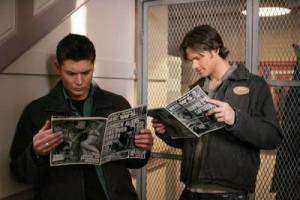 This episode had Abaddon in it, so it was already superior to last week’s. But on the whole, how did “Devil May Care” measure up? Hit the jump for my review.

END_OF_DOCUMENT_TOKEN_TO_BE_REPLACED

Hi, I’m Luce (hi luce!) and I’m an Asian-American. May is Asian Pacific American Heritage Month in America, so it’s a great time to talk about Asians, stereotypes, and representation. Let’s take a look at where Asian characters stand in today’s mainstream television media after the jump.

END_OF_DOCUMENT_TOKEN_TO_BE_REPLACED

So I realized a while back that there really aren’t any music posts. That makes me sad. However, as someone who is more into singles as opposed to following actual bands, I don’t feel 100% qualified to do in depth posts about a particular band. Instead, I will be bringing you some Public Music Announcements highlighting some awesome bands.

Today, we’ve got big news for all of our 90s lovers. Backstreet is back, everybody! Kevin is rejoining the group after leaving in 2006 to have a family. But now, we have our “oh yeah” and wet and shirtless Backstreet boy back in the mix. You can click here to get a better scoop!