It’s rare that I admit this, but I was way wrong about Thor.

When it was first announced that the new Thor was to be a lady, my initial reaction was “of all the heroes to genderbend, why pick one that is ‘supposed to be’ a guy?” I worried that it was a publicity stunt and would be set up for failure, setting back future efforts. Then I noticed all the comments about it and how they were almost uniformly of the rabid anti-feminist troll variety. Any time I find myself expressing an opinion shared by the “red pill” types, I immediately reexamine that viewpoint, and I’m so glad I did! 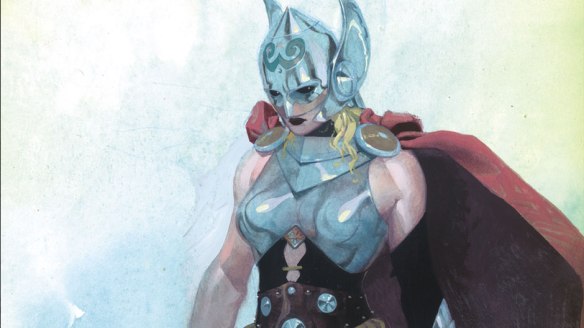 When I started reading The Mighty Thor, I realized not only was I mistaken in my assumption that Thor was a poor choice for a high profile genderbend, but that Thor was in fact the perfect choice. I am glad I was so incredibly wrong because I am excited about the Thor quadrant of the Marvel universe for the first time since I was a kid. Judging by the fact that this run of Mighty Thor has been selling consistently well since its release, I am not alone in that opinion.

Very quickly, about two issues into the first arc, it became clear that not only was the choice to have Thor portrayed by a woman very deliberate, but it was a way to jump right into the midst of the pushback to inclusiveness and hit it squarely in the face with an all-powerful magic hammer. Not only does this series perfectly nail (see what I did there) the fallacy of these arguments against a more diverse base of main characters, it exposes their root: fear at the loss of “straight white male as default”.