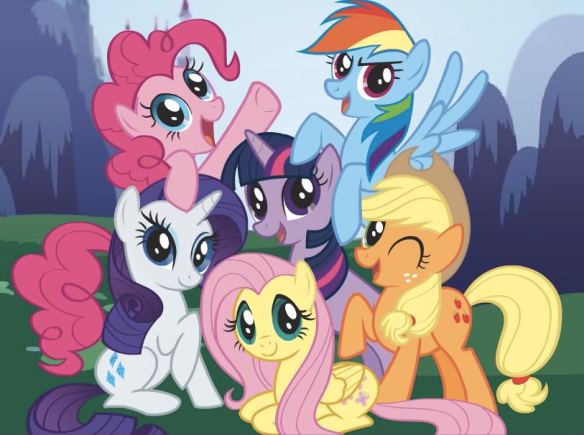 Recently this article appeared on Ms. Blog, which is a blog for Ms. Magazine, a feminist blog that critiqued the popular kids show My Little Ponys: Friendship is Magic. Not long after Lauren Faust the creator of My Little Pony wrote a rebuttal to the above mentioned article defending her work.

The first article is written by Kathleen Richter who laid these charges at the hooves of My Little Ponys:

So overall, these are the lessons My Little Pony teaches girls:

Many people came to the defense of the show and soon Faust responded on behalf of her little ponies.

A surprising amount of commenters rose in defense of the show, and for that I am extremely grateful. Without repeating their retorts too extensively, here is my defense against the accusations.

It surprised me that she responded at all considering that similar charges have been raised against the show. Even here at Lady Geek Girl and Friends (though we doubt Faust even knows we exist) we have discussed some episodes that come off as potentially racist (see: the episode with the Buffalo and the episode with Zecora the zebra).

But despite some of its problems, I think it’s fairly obvious that many of us love My Little Pony. It’s not without its flaws, but I never thought the problems as bad as Richter makes them out to be. Despite my own criticisms of the show, I realized that many children might not pick up on the problems I’m seeing. That’s not to say that those problems don’t matter or that kids might not be learning something from them subconsciously, but I personally don’t think that the current problems in My Little Pony isn’t anything that good parenting can’t fix.

I find many of the charges Richter raises ridiculous. Faust defends her work much better than I ever will so I won’t try to counter Richter’s argument. Though I would like to say one thing about her criticisms.

Rainbow Dash being thought of as a lesbian simply because she is a tomboy with a rainbow mane is just as ridiculous to me as hating her because people think she is a lesbian. Just because someone is a tomboy—which by the way I hate that term because it immediately says that any girl that doesn’t like stereotypical girly things is somehow “mannish” or less of a woman—doesn’t mean they are a lesbian. Furthermore, someone liking rainbows doesn’t mean that they are a lesbian (Rainbow Dash has, I assume, a natural rainbow mane. She didn’t dye it to show her gay pride. And just to be perfectly clear none of these things mean she isn’t a lesbian either). Putting girls and members of the LGBTQ community–hell, putting anyone in a box, defining specific things that make someone a girl or a lesbian is far more damaging than anything My Little Pony has done.

What do you think?

Mondays suck. This is a universally affirmed fact of life.  But we at LGG&F are dedicated to making your Mondays less suckish, so today we bring you this!

I’m a terrible horrible no good very bad updater, and for that I apologize. But I’m back with a vengeance. Get ready.

So I’ve spent a bunch of time telling you why ponies are awesome for a lot of reasons, and addressing where they have some issues as well.  Now for my final installment in my MLP series, I wanna touch on the brony fandom itself and some of its high points.

Bronies have banded together for various charitable/fundraising endeavors. They auction albums, art, and other creative works for charity.  They banded together to support the Humble Bundle indie video game charity (you pay whatever you want for the games, and the proceeds go to mostly children’s charities); and dropped hundreds of dollars on original Lauren Faust artwork whose proceeds benefitted post-earthquake Japan.  Bronies have big hearts.

Bronies, whether they want to or not, are becoming a more visible part of pop culture purely because of their novelty to the ‘normal’ people.  But from what I can tell, most bronies are owning their bronydom with pride.  This is a refreshing change because it means that somewhere out there is a generation of young people who won’t judge their children or each other for liking things society says their gender shouldn’t like.

Brony fandom has exploded with creative original and manipped works from remixes and original music to art in all mediums imaginable (from felt to plushies to fan-designed pony video games) to fanfiction. One of the most impressive creative works in my opinion are the fanmade video games, simply because of the unpaid effort of designing and coding and debugging an entire game.

I gave this a separate category because it’s one of the most charged areas of brony fandom.  But just as with any fandom, there is everything from cute one-shots, adventure stories, romances, and yes, clopfic (the NC-17 of ponyfic).  Some stories, both ongoing and complete, have already become famous/infamous in fandom (See: My Little Dashie, Fallout: Equestria, and the terrifying Cupcakes).  All I’ll say about clopfic is this: your kink is not my kink, and I don’t want to know that much about horse genitals.  But as far as shipping itself is concerned (especially between the female characters), I think it’s important to separate the characters from the fact that they are nonhuman, and consider that here is a community that we associate with men, writing lesbian relationships that are focused on the romantic rather than the objectifying. If Rainbow Dash and Fluttershy can be together, why not other women? (I personally don’t ship anypony, but mostly because I don’t see the ships, not out of any squick…)

Finally, bronies in general tend to be sweethearts.  They take to heart the idea of love and tolerance that sits at the root of the show and run with it.  From small area meetups to conventions like BroNYCon and Everfree North, bronies make an effort to find other bronies and make them feel included.  Jump into fandom and try it out, non-bronies, and I guarantee you’ll be welcomed into the herd. 😉

This concludes my MLP series, everypony, but don’t doubt that I’ll keep posting about it as I’m inspired to, and check out ladybacula’s weekly episode reviews as well!

Super Best Friends Forever is a show that is part of Cartoon Network’s upcoming DC Nation lineup.  It is being headed by none other than the wonderful and tremendous Lauren Faust, the mastermind behind the magnificent My Little Pony: Friendship is Magic series. (If I remember correctly, this show is actually the reason she stepped down from her post as Queen of MLP.)

Little is known about the show yet outside of the title and the main characters (Supergirl, Wondergirl, and Batgirl, obviously) but I can say with certainty that this show is going to be a hit.  Faust has already proven that she is a boss when it comes to putting a fresh spin on well-known franchises and when it comes to portraying realistic friendships between girls.  I don’t know anything about DC canon outside of what I soak up from being friends with Lady Geek Girl, but I’m still going to check out this show, and I’m sure scads of other bronies will too. (Big round of applause to Faust for creating, however inadvertently, a fanbase that doesn’t care about gender demographics and will watch shows based on quality rather than societally-enforced gender boxes!)

But anyway, I’m looking forward to this and so should you! (And when the positive ratings start rolling in, maybe DC will take the hint that its consumers enjoy seeing positive portayals of comics women – I’m looking at you, new 52.)