My lack of money always stops me from being the avid gamer I’d like to be, but I’ve always bought every game from the Phoenix Wright series. Once I heard there was a collab game with Professor Layton, I knew I had to get my hands on it.

The Phoenix Wright: Ace Attorney series follows the defense attorney, Phoenix Wright, as he covers different legal cases. In the older games he has an assistant, Maya Fey, who helps him throughout Professor Layton vs. Phoenix Wright: Ace Attorney. They generally cover murder cases and will investigate crime scenes on their own. Whenever you’re not investigating, you’re cross examining witnesses in court to uncover the truth. The game is a text RPG (or visual novel), along with areas you can investigate/examine.

The Professor Layton series is about Professor Hershel Layton and his assistant, Luke Triton. They travel the world deciphering mysteries, helping people in need, and solving puzzles. Their adventures vary from saving ancient civilizations to helping locals with small problems. The game style is an exploration RPG mixed with random brain teasers and puzzles to solve.

You’d think these two games merged together would be something amazing, right? Unfortunately that wasn’t the case. I’ve been putting off this article for months, wondering if I’d have a different opinion of the game over time, or if the after game content would soften the blow… but I just can’t like this game. The story wasn’t interesting, the game mechanics were frustrating, and the ending was horrendous. It’s possibly the laziest writing I’ve ever seen, and I’m hoping I never have to again. What really kills the game for me is the emotional and mental abuse the main female character goes through from her family.

END_OF_DOCUMENT_TOKEN_TO_BE_REPLACED 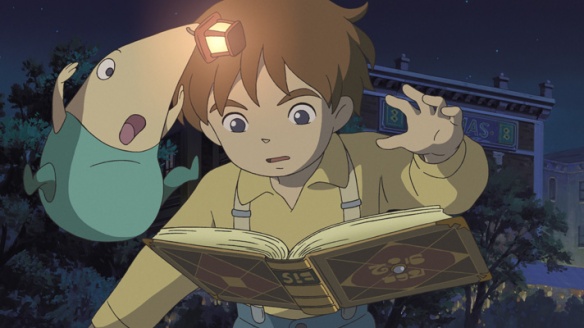 Ni no Kuni: Wrath of the White Witch is an upcoming RPG for Playstation 3 developed cooperatively by Studio Ghibli (Castle in the Sky, My Neighbor Totoro, Spirited Away) and Level 5 (Dark Cloud, Dragon Quest VII, Professor Layton). Oh, be still, my beating heart! If you are like me, upon hearing about this marriage you imagine their offspring as crazy combinations such as My Neighbor Layton and Castle in the Dark Cloud. Then, you will begin to worry that maybe this is one of those things where amazingly awesome thing ‘A’ plus awesomely amazing thing ‘B’ equals tragedy. You know, like pancakes and hot-tubs, or hunting and furry-sex. Sure, every human being since 1997 has thought of doing it every day, but none of us are crazy enough to actually try it. Well feel free to blink your skeptical eye, my friend, because Ni no Kuni looks fucking amazing.

I should clarify that a bit. If you love the magical, adventurous, and heartfelt nature of Studio Ghibli films, and you also happen to love the challenging, strategic, and immersive gameplay of Level 5 games, then Ni no Kuni is fucking amazing.

Spoiler warning! I talk about the game’s introduction and dramatic question! Skip past the next picture if you do not want to see. END_OF_DOCUMENT_TOKEN_TO_BE_REPLACED