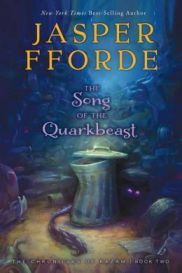 Almost a year ago I reviewed The Last Dragon Slayer, written by my favorite fantasy author, Jasper Fforde. The tale of teenager Jennifer Strange and her struggle between her duties as a dragon slayer and her own moral compass, along with a colorful cast of charming characters, was a very entertaining, funny, and sometimes saddening read. I still highly recommend it. The recently released sequel to The Last Dragon Slayer is The Song of the Quarkbeast. From the minute I heard there would be a second book, I had very high expectations, and thought of multiple possible plots for this novel, because I have that kind of free time.

The Conch has spoken!

Would it be primarily about people/dragon relations? Would we learn more about the new dragons? Would they cause problems for Jennifer, or would they remain peaceful? What about Jennifer being a berserker—would that be involved? Spoilers after the jump.

END_OF_DOCUMENT_TOKEN_TO_BE_REPLACED

Those of us here at LGG&F are back again and working tirelessly to compile and vote on this year’s top 10 canon and top 10 fanon pairings in Geekdom. Last year’s list can be found here.

Now onward to see who made to this year’s list!!

END_OF_DOCUMENT_TOKEN_TO_BE_REPLACED

Futurama is back with a new season! Woooo! Hoooo! This one hour episode “The Bots and the Bees” and “A Farewell to Arms” was pretty awesome for a Futurama season opener. The first part was mainly about everyone’s favorite thieving robot Bender. After the purchase of a sassy beverage dispenser named Bev, things start to get interesting. What started off as a fight for the honor of two bimbo bots, Bender and Bev soon start banging, literally. Soon Bev dispenses a cute little miniature Bender. After little Ben is abandoned by his metal mama, Bender becomes a fantastic father. After a montage of father and son stealing and property-damage-based bonding Ben grows into the awkward adolescent stage of a growing robot. Little Ben’s dream is to be a bender like his dad, but he didn’t inherited it from Bender. To install it would mean to lose his memories, including those of Bender. Eventually Bender selflessly installs the bending program so that his son can follow his dream.

This was a really interesting episode; here we learn how robots reproduce (I always wondered) and that Bender, for all his evil and selfishness is capable of caring for something other than himself. Who would of thought Bender would make such an excellent dad? Though it isn’t too much of a surprise do to his occasional emotional attachment to his best friend Fry and he has often displayed emotions over such things as broken robots and helpless turtles. Even though his son eventually didn’t remember him, Bender still loves him.

The second part was about the Martian calendar and its prediction for the end of the world in 3012. Amidst the chaos is the chivalrous Fry and the lovely Leela. In classic Fry fashion Fry is constantly trying to do nice things for Leela, which always seems to backfire. While trying to join the balcony club, the two one-sided love birds are alerted to the end of the world translation. Panic soon engulfs the world. Luckily they find an ancient Martian space ship in an underground pyramid. Since the ship can only hold 30,000, the president sets up a machine that chooses each person based on merit. Due partly to his lucky pants Fry has a ticket, due to Leela’s unfortunate choice of career, she is not. Fry does the noble thing and manages to trick Leela to go on the ship to Mars without him. Unfortunately it turned out that the translation was wong, dead Wong (due to Amy.) It turned out that the prophecy was meant for Mars, not Earth. Once again Fry messed up. Mars soon starts to skim the Earth, Fry tries to save Leela, but manages to tear her arm off instead. She is saved by Scruffy and his trusty ladder.

This episode was a typical “Oh are they in love now?” episode or an “is Leela still not over Lars’s death who was actually alternate-timeline Fry and so should just be with him, damn it?” episode. Although I love Fry and Leela relationship, they have begun to wear on my rooting arm. Their ambiguous affiliation is frustrating to fans (or at least to me) and I was hoping for a little more depth, or at least some progress from these two. Fry is constantly proving his love to Leela and she for some reason does and also does not return it. Although this particular episode had a happy ending, I still was a little pissed at Leela’s attitude. If you don’t like him, reject him! If you do, accept him! Zoidberg Jesus people!

Selling your soul in exchange for something is a plot trope older than the story of Johann Faust. In pop culture it’s primarily conceived of in Christian terms—sell your soul to the devil, and you’ll never get to heaven but you’ll have something you want on earth, whether that’s fame, talent, love, money, or some other fifth option.

People’s motivations in selling their souls are tremendously varied. Although we usually conceive of the sellers in these transactions as selfish and impatient (why wait for a potential eternal reward when you can get what you want now), but in reality a lot of the stories about these demonic bargains have their roots in tales as varied as revenge, romance, filial love, and desperation.

So let’s look at some of these situations, starting with Supernatural. Although I know we consistently beat this poor show to death nearly weekly in OMPCJ, it’s really the show’s own fault for being such a wealth of religious themes. Anyway, in Supernatural souls are hot currency. These exchanges are usually made at a crossroads, but any demon can make a deal, and the Winchesters are really, really bad at avoiding them. Over the course of the show John’s sold his soul to bring back Dean, Dean’s sold his soul to bring back Sam, Sam tried and failed to get a refund for that, Bobby ‘pawned’ his soul to find Death and get his legs back, Mary unknowingly sold off Sam to bring back John… A big antagonist/sometime ally in the show is Crowley, a demon who is King of the Crossroads, and a masterful dealer when it comes to getting what he wants in the fine print. Supernatural soul-selling is a value-neutral transaction—people from all walks of life can and do sell their souls for any and all reasons, but when the main characters knowingly do so, it tends to be last-act-of-a-desperate-man stuff, seized upon when there are no other viable options left. And collecting on these deals is unpleasant: once whatever terms you and your demon financier agreed upon have been fulfilled, if your soul’s in the balance, you’re dragged to hell for eternity by hellhounds. Fun.

Next let’s diverge from our usual pop-culture fare and look at a musical. A soul-based transaction is at the heart of the conflict in the show Once on this Island. A peasant girl named Ti Moune discovers a wounded nobleman who has crashed his car in a storm. She falls in love with him, and bargains her life against his to keep Papa Ge, the god of death, from claiming his soul. Ti Moune also dies at the end, but the force of her love so impresses Papa Ge and the other gods that they treat her kindly in death and let her legacy of love live on. This is an interesting take on the demon-deal trope, as it’s not set in a primarily Judeo-Christian mythos.

Finally, let’s look at the manga that inspired me to choose this topic: Black Butler. This story focuses on Earl Ciel Phantomhive, a sharp and proud young boy who was sold into slavery after his parents were mysteriously murdered. He makes a deal with the demon Sebastian Michaelis to gain the power to seek revenge on his parents’ murderer: Sebastian will serve him as a butler and help him achieve his vengeance, and then Sebastian gets to consume Ciel’s soul.  This story is interesting for a couple of reasons. First of all, the way the story is told, we as an audience support Ciel’s decision to make the deal and root for him to fulfill his mission (which of course will end in his death and damnation). Secondly, the terms of the deal are interesting as well; in this story, the demon is totally willing to be subservient to Ciel for as long as it takes, and he is faultlessly loyal to his master, staying by his side for the duration of their agreement. There is no fine print or loopholes in their deal from out of which Sebastian tries to sneak.

What other soul-selling storylines exist in pop culture? A fiddle of gold against your soul you’ll tell me in the comments 😉

That’s all for this week’s Oh, My Pop Culture Jesus! Tune in next time and get some religion!

Hey followers and browsers! Coming up in the next couple of days is AnimeUSA: a really big anime convention in Arlington, Virginia. Coming up on Thursday, in fact. This is going to be not only my first massive convention, but also my first one out of state. As you can probably guess, I’m super excited! And, if you know me, you can probably also guess that I’m scrambling around trying to get my cosplay together before I leave which usually consists of me running around my house, flailing my arms crying “I don’t know how to do this” until it magically comes together somehow. You would think I would eventually learn…

Because of my amazing time management skills, I don’t have as much time as I would like to devote to this week’s Manga Mondays. As such, we will be looking at a smaller piece that stays true to my shoujo roots. Full of love and zip-a-tone, we will be looking at “The One I Love” [私の好きな人] by manga’s royalty themselves, CLAMP.