Recently I was bored and decided to try something new on Netflix. Since Netflix is awesome, it suggested several things I might like, and to my delight, I soon found a fairytale with a female protagonist and Tim Curry as a supporting male character. That alone was enough to get me to watch, but I was pleasantly surprised by how much the movie subverted some typical sexist fairytale storytelling. 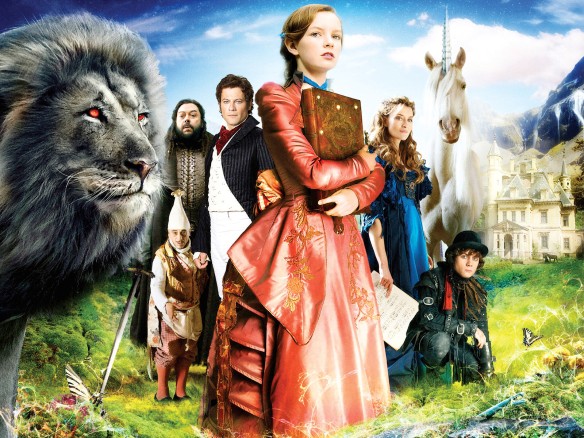 It looks like a Chronicles of Narnia ripoff, but it’s not.

The Secret of Moonacre is the story of Maria Merryweather, a young girl whose mother died when she was young and whose father recently passed away. She discovers that her father lost all of his assets to gambling and she is being sent to live with her uncle in Moonacre Valley. The only thing her father was able to leave her was a book called The Ancient Chronicles of Moonacre Valley. Maria begins to read a story about a woman so pure and good that nature loved her and the moon blessed her with magical moon pearls, which is why people began to call her the moon princess. But when she reveals their powers to her father and fiance, they become greedy and each attempt to steal the pearls for themselves. The princess then places a curse on the valley using the power the moon gave her, declaring that the pearls must be returned to the sea or the valley would be cursed forever. When Maria goes to live with her uncle, she discovers that not only is this story true, but that she is the new moon princess and must break the curse on the valley.

This was a surprisingly feminist story featuring a young girl entering a dangerous and magical world who is able to take control of her own life and help others. Her magic comes from being good and pure, like the first moon princess, but this does not translate into the same sexist storytelling that many fairytales do when a woman’s strength is said to come from her goodness and purity. Nor is Maria a boring character with no faults: she is never put up on a pedestal, but rather her strength comes from the fact that she is able to use her virtues to overcome her faults.

END_OF_DOCUMENT_TOKEN_TO_BE_REPLACED

In looking through Tim Curry’s filmography, I was somewhat startled to stumble upon a film that bore more than a slight resemblance to Legend in terms of plot. A battle between light and darkness that must reach its conclusion before the cursed land is destroyed completely sound familiar? Yeah, okay, maybe I have a “type” for flicks, but I figured why the hell not. And in the twenty-five years between Legend and The Secret of Moonacre, the story had to have gotten better, right? Children’s movie or not, the storytelling had to have at least improved… right?

Spoilers lay under the cut.