The other day, my brother handed me his phone with only the preface of, “you should write an article about this.” He knows me too well.

The last time I talked about My Little Pony, I touched on some of the good messages that the show brought to younger girls—confidence, hard work, and perseverance—and how moves within the show can serve two basic purposes: one of teaching the younger female audience the virtues that will help them when they’re older and the other providing business investors with revenue. Today I’ll be discussing this latter point in concerns to the negative implications to MLP’s audience. However, I won’t be doing this through the Friendship is Magic brand. Instead, I’m going to be looking at the newest member to the franchise, Equestria Girls.

END_OF_DOCUMENT_TOKEN_TO_BE_REPLACED

This series did not benefit from having a thirteen-episode season, and I think that was one of the central problems. It was like the MLP writers went down a checklist of things that fans wanted and made sure to cram each into the season, but because of that everything seemed forced.

This is probably the most evident in the Trixie and Discord episodes. Both episodes had the potential to be spectacular and both wound up being throwaways. It was truly disappointing to watch as nothing really happened in either episode. It was as if fans were only supposed to focus on the fact that their favorites were present (and then get excited) and not notice how poorly both episodes were written.

As much as the season seemed to be constructed to meet a checklist, the points this season chose to focus on in a lot of cases were terrible. There were two Spike-centered episodes this season out of thirteen, and the previous season (with twenty-six episodes) also only had two Spike episodes. Overall, very little time was spent on Rarity this season (who is my favorite of the mane six) and I feel more time should have been given to the mane six instead a more minor character like Spike.

I know I’m part of the brony crowd, but there have got to be little girls that watch this show, right? And I feel this season didn’t exactly cater to its entire audience. One of the reasons MLP has earned the appeal of an older crowd was because the show did not blatantly cater to them. This season was clearly meant for the bronies, and as I’ve said in an earlier post, I think too much of that fan service can be a bad thing. In Season 3, it was just too much.

The season started with lots of potential, but it didn’t fulfill that potential. There was a lot of nothingness and throwaways. Now I’m not saying I wanted a full fanfare for every episode, but to have so many throwaway episodes in a season half its usual length is a problem. I feel that if the season was longer, more plot concepts would have been fully fleshed out and the forced-ness of the season might not have been as bad.

There’s a storm on the horizon. In fact, many would argue that it’s already here and it as such, has already been given a name: Hurricane Alicorn, starring one Twilight Sparkle.

Yes, apparently there’s a big fuss in the more vocal part of the fandom over the purple pony reaching the mythical level of the Alicorn—some sort of pegasus/unicorn hybrid. And as you can probably tell from that last statement, I’m not in this fandom. I have seen a grand total of three My Little Pony episodes, counting this finale, but I think that even as an outsider I can talk about some of the trends happening in terms of the sociology of the program (perhaps even especially as an outsider). Specifically in terms of this season finale, it’s clear that there’s an interesting disparity happening between the two very distinct parts of the fandom. Interesting in some respects, rather disgusting in others.

END_OF_DOCUMENT_TOKEN_TO_BE_REPLACED

THIS POST HAS BEEN UPDATED TO REFLECT THE ONGOING NATURE OF THIS ISSUE. I AM AWARE THE IMAGE IN QUESTION IS NO LONGER HOSTED AT MY LITTLE BRONY. THERE IS NEW INFO/ OPINION AT THE BOTTOM.

There’s not going to be a lot of funny things or cute images in this post.  I am pissed and pontificating, so be forewarned if you were expecting a happy MLP post.

The world of memes is an odd one, and there are many that are creepy, sexist, racist, or downright disturbing. The recently-introduced Dolan is all of the above, depending on application.  Dolan is a poorly-drawn, psychopathic reimagination of Donald Duck, and the humor that comes out in Dolan rage comics tends to be anything but – graphic murder, rape ‘jokes’, and mental images that are just unpleasant and terrible, and which, like the Pedobear meme, seem to exist solely to push the boundaries of what is okay to say on the internet.

I don’t usually get involved with drama on other websites.  I’m a born-and-bred lurker, and, on sites like ICanHasCheesburger’s My Little Brony, I scroll past all the images and call it a day.  I hadn’t checked that page yet today, but a faithful follower of this blog and that page put me on the scent of one of the ickiest, most downright reprehensible things I have ever seen posted on that site.

Unfortunately at this point I must warn for rape triggers, something My Little Brony did not have the courtesy to do.

Among the crop of fresh images that was posted this morning was a Dolan comic crossed over (if you can call it that) with MLP.  The image depicted Dolan raping a crying Fluttershy while patting her head and saying ‘Shhh, love and tolerate’ (misspelled, of course, in true Dolan style). It was titled ‘Your Punishment For Abusing the Language Filter’. I will not be posting it or linking to it here.

Let me count the things that are wrong with this image.  First of all, pictures on any of the Cheezburger sites must be vetted through a voting process.  Judging from the comments on this particular image, it is not a picture that 99% of the bronies following this page would have upvoted to a point where it made the front page. This means that the mods of the site plucked this picture out of obscurity and gave it front-page status.  I am not going to say that the creator of this picture is faultless – they are sick as well to think this is in any way appropriate, even within the realm of trolling – but that the mods thought this was something acceptable for the front page is beyond the pale.  They censor out curse words in images/comics and yet feel it’s totally acceptable to post an actual image of brutal interspecies rape on the front page? That’s bucking ridiculous.

Secondly, the caption.  It is a slap in the face to bronies who actually embrace that mantra – love and tolerate – as it 1) suggests that Fluttershy should sit back and accept being violated and 2) says to the bronies who read it: “What are you going to do about this? You have to love and tolerate me – it’s what you believe, don’t abandon that!”  I know that the first, second, and third rules of the internet are ‘Don’t feed the trolls,’ ‘don’t feed the trolls’, and ‘don’t feed the trolls’, but to sit back and accept something like this is, in fact, unnacceptable. It is more in line with the values of MLP to vanquish something like this (through peaceful action, but to vanquish it nonetheless) rather than to sit back and tolerate its goings-on.

Finally, regarding the title.  Comments on Cheezburger pages have a language filter that can be got around with a number of html tricks or by simply saying ‘w3apon’ or ‘$hit’ or typing in binary instead of their fully-lettered alternatives.  (You can’t post comments which contain the actual words.) It’s highly unlikely that the original submitter of this image had used that title; it was probably changed by the mods because of frustration with policing comments. But the message it sends is just disgusting: “If you don’t do what we want you to, we will post pictures of sweet and innocent characters being sexually brutalized.” (It’s a sad irony that the dozens of bronies protesting the posting of this image could not even spell out rape (r@pe) because it was blocked by the filter.) I acknowledge that the language filter is a good idea in theory, but it’s far too easy to circumvent, and posting a picture of rape as a punishment for something as trivial as spelling ‘fuck’ fu( |< is.. I just don’t have words.

In reality, I doubt this picture was intended as ‘punishment’.  I can only assume that some mod thought it would get the site a lot of pageviews and comments.  In either case, however, that mod is a douchebag above and beyond regular douchebaggery, and has failed as both an internet moderator – we put our trust in mods to stop things like this from being posted, not to give them vindication – and as a human being.

This is how I feel. I need a drink.

EDITED TO ADD: The image in question has been taken down by the site, and this text has been posted in their banner: “Let’s call a truce! No more abusing filters and Fluttershy will remain out of harm’s way!”

This just serves to show that they do not regret using a disgusting and triggering image, and feel that we as a community have been taught a lesson through that use.  I am appalled that they are not showing any sort of regret about this incident and instead call for a truce, as though this was a war between people whose viewpoints are equally worthy, rather than a stand against calling filthy rape imagery ‘humor’. I know that for some of the bronies involved this was more about the langauge filter issue than the rape picture itself. Regardless of why we opposed the use of this picture, it still stand that this was an inappropriate and despicable use of mod power. 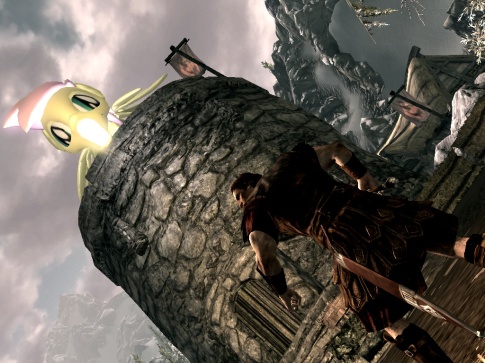 Skyrim is a little more satisfying, a lot more cute, and way more friendship-killing than ever with this Skyrim mod. Want to watch ponies torch the general public of Skyrim? Think of your delight as the ponies vomit fire and ice upon your dragonborn ass. The only thing this mod is missing is gigantic hunks of pony meat to loot from the corpses. I can only hope that this mod is expanded upon in the future, adding more ponies than just Fluttershy, gigantic hunks of pony meat, and friendship-is-forever armor (craftable from the adorable pony’s bones, of course).