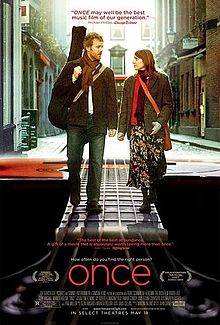 Once is a new Broadway musical hit that won eight Tony awards, including Best Musical. I’m sure some of you knew that in the back of your minds. But what you probably didn’t know was that it was based on a movie, which I recently got the chance to watch.

Once is a story about a young(ish) Irish man who works in his father’s vacuum cleaner repair shop and plays his guitar on the street for cash in his free time. He enjoys composing in the evenings when he’s not outside. It’s on his street corner where he meets a fairly young woman from Eastern Europe who also has a love for music. They strike up a friendship and the man becomes motivated to chase after his dreams: becoming a musician in London.

The reason I didn’t give any names here is because their names are never said in the movie. Even on the IMDB page they are listed as “guy” and “girl”. I think that adds a lot to the story now that I think about it. In a sense, it makes the story more relatable; anyone could be this guy and any girl could be that girl.

Now this isn’t the type of musical with over the top theatrics. There’s no song and dance. No gigantic chorus. Just some guy and some girl with a guitar and a piano (that the girl plays in the music store because she can’t afford her own) playing some tunes. And they’re beautiful. I think I’m in an ever-shrinking minority when I say I love simpler music more than complicated things. I don’t like my music auto-tuned to the nines; I don’t need seventy-six trombones in my orchestra. And the songs in this movie were just that, simple music, with simple and pretty lyrics, and beautifully sung.

I didn’t know what this movie was about going in, and it honestly surprises me that it was turned into a stage production. It’s not a lot of story; the entire plot takes place over the course of a seemingly short week. But what the story lacks in over-the-top theatrics it makes up for in honest charm.

Hopefully I can see Once sometime soon when the cheap tickets come out of the woodwork. Until then, I’m just going to have to keep myself content with YouTube clips like the one below.