Rin: Maybe it’s something that comes with age, but going into E3 no longer has the hype it used to. In the years before, there was at least one game I was interested in hearing about. This year, though, I came in at a hard neutral: what I knew was going to be shown I wasn’t interested in, and I had no hope about the things I didn’t know about. Yet, maybe it was this neutral stance that led to me being pleasantly surprised in some cases, and saved me the disappointment in others.

As industry veterans struggled to remember what they should even do on the E3 stages, the year’s themes of inclusion and the importance of the gamer community were surprisingly not entirely off-base. I’d even hazard to say that companies may even be starting to care about diversity, likely in no small part due to the success of other diverse titles like Overwatch. And overall, the presence of non-male, non-white people on stage and in the games shown was much higher than I was anticipating. There’s a lot to cover, so thankfully this year I’m joined once again by BrothaDom. You ready to jump in?

Dom: Yep! I was feeling a little bored and jaded going into the conference, but it definitely had some pleasant surprises sprinkled in. Let’s do this.

END_OF_DOCUMENT_TOKEN_TO_BE_REPLACED

Despite this year being packed full of great games already (just look at games like NieR: Automata and Breath of the Wild!), the Spring/Summer season never fails to hype even more games coming in. No doubt E3 has an impact on this, but even before games are shown there, companies are making announcements and releasing information on their upcoming projects. Being the maverick that they are, Nintendo has already teased many of their big upcoming projects. The title that caught my attention the most was the follow up to 2015’s Splatoon, a game I had an immense fondness for.

END_OF_DOCUMENT_TOKEN_TO_BE_REPLACED

I’ve finally taken the time to sit down and watch the Fire Emblem Direct that aired on the 18th. While I’m excited for the proposed game coming out for the Switch in 2018 (about which no details have been given yet), and I’ll probably enjoy Fire Emblem Warriors with the same undevoted, “it’s good for killing some time” mindset that I did Hyrule Warriors, I find myself conflicted on the other two titles that were brought up during the event. Both Fire Emblem: Echoes and Fire Emblem: Heroes are beautiful games that will probably be fun and enjoyable. However, with both of them, I fear that the series may be slipping back into some tropes that we really should be past in 2017.

END_OF_DOCUMENT_TOKEN_TO_BE_REPLACED

Given the current state of the nation, I think it’s fair to admit that a lot of us are reeling and suffering from the recent election results. While I absolutely respect and encourage those who are able to go out and protest in any way they can, sometimes we all need a little diversion from the shittiness that’s been thrust upon us. While for me this usually manifests in playing Harvest Moon or fiddling with the slew of dollmakers on Rinmaru, I just so happened to come upon another great game for when you really want to disconnect from the real world for a bit. If you’re a fan of internet dress-up games too, then you’ll adore Style Savvy: Fashion Forward.

END_OF_DOCUMENT_TOKEN_TO_BE_REPLACED

Going into another year’s E3, a shared sentiment around the gaming community seemed to be one of disenchantment and exhaustion. The landscape of gaming is in a position where some things are trying to change, but other things are staying the same more than ever. People are tired of seeing the same old thing, yet there are so many complaints when new things are tried. It’s a game no one wins, and yet both sides keep trying. From the looks of things, the call for inclusion is starting to be heard. Nevertheless, the status quo is trying to hang on harder than ever, and it in turn produced some of the most lackluster entries in E3 that I’ve ever seen.

END_OF_DOCUMENT_TOKEN_TO_BE_REPLACED

Recently my brother and I started playing TriForce Heroes, the newest installment of the Zelda series on the 3DS. While this game didn’t necessarily catch my attention from either the Nintendo Directs or E3, when I watched other people play it and saw how much fun they were having, I decided I had to pick it up despite its forced multi-player angle. However, I did also want to pick it up for one other reason: the fact that this game is the first where Link isn’t restricted to a certain type of clothes based on his gender. It’s sad to say how unique it is for a game to both allow characters to wear whatever the fuck they want with no consequence (via in-game perception) and to practically encourage it. While this is what it looked like from the outside, I couldn’t be sure until I played the game myself.  At around the same time as TriForce Heroes’s release, the Zelda fandom received another announcement that seemed to promote the message that, well, if some part of Nintendo was going to take the steps to being more inclusive in their games, it was going to be the Zelda franchise. But how effective will their efforts be? I can’t predict the future, but if anything, I think it’s a good start.

END_OF_DOCUMENT_TOKEN_TO_BE_REPLACED

On my business card, I am a corporate president. In my mind, I am a game developer. But in my heart, I am a gamer.

Rin: This wasn’t the post I was planning on writing this week. I think many other blog writers, tech journalists, and gaming fans can echo the sentiment that we expected July 11th to be just another day. Not the day that we would lose one of the most treasured people in the gaming industry to cancer. While I usually don’t take celebrity deaths hard—the last one I cried over was Steve Irwin, but who didn’t—I’ve spent the better part of the last two days on-and-off crying over too early demise of Nintendo’s previous president and CEO, Satoru Iwata. I’ve never realized what an impact he had on me, and I’ve found so many who felt the same.

Dom: Same here. I’ve played so many Nintendo games and watched so many Nintendo Directs, but I wouldn’t have thought that Mr. Iwata’s passing would have me continuously on the verge of tears over the course of a few days. It was a surprise, undoubtedly, and it’s incredibly hard for many of us to compose ourselves.

END_OF_DOCUMENT_TOKEN_TO_BE_REPLACED 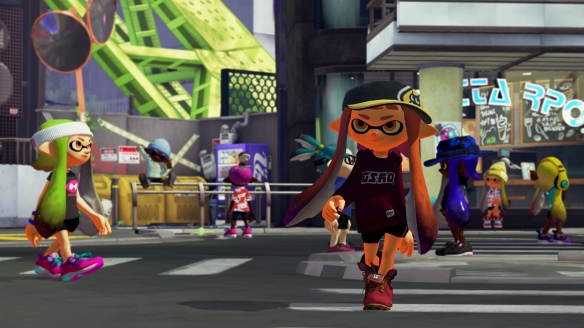 END_OF_DOCUMENT_TOKEN_TO_BE_REPLACED

Rin: Honestly, this year I wasn’t sure what to expect from E3. Sure, we had the old stand-bys of another Call of Duty game and another Mario game to look forward to (if you’re into that), but for the most part, viewers were going in blind. In lots of ways, I was pleasantly surprised, and even in some cases I got to revisit the emotions that E3 should give its audience: whimsy and unmitigated excitement. In other cases… uh, not so much.

Since this was such a jam-packed year, I’m pleased to be joined by my fellow games enthusiast, BrothaDom!

Dom: Hi Rin! Yes, I’m in agreement with you there: this year definitely brought some enjoyable highs, and some disappointing lows.