The other week, I went to Steel City Con, the Pittsburgh Area’s valiant attempt at a comic con. Lots of vendors, bunch of B- and C-list TV celebs, usually two or three A-listers (last year I got autographs from Shannen Doherty AND Holly Marie Combs!!!), and of course: tons of passionate, weird, lovable pop culture junkies, God love ’em. As I went through through my loot, I realized I had had a gay ol’ time. My two biggest gems? Action figures of Willow and Tara, and All New X-Men #17: aka newly-out Iceman’s first, big (I’m talking full-page panel) gay kiss. This is exceptional, you guys: Iceman has been part of the X-Verse since its very beginnings in 1963, one of the original five X-Men. So how did we get to this place fifty-four years later? It’s the long line of the quirkiest comic team family expanding its inherent diversity. Let’s take a look.

From my personal collection. After searching all the comic vendors at Steel City Con, my efforts were rewarded. Makes my gay, mutant-loving heart so happy!

END_OF_DOCUMENT_TOKEN_TO_BE_REPLACED

In the last few days of the star sign Gemini, I wanted to talk a bit about twins in pop culture. I think television writers struggle with how to portray twins, and that’s putting it lightly. Identical twins seem to be the ones featured most prominently—why bother making two characters twins if they don’t look alike? Never mind the hundreds of fraternal twins actually out there who get less representation on TV because they’re less of a curiosity. Identical twins tend to be used as visually striking additions to TV shows, typically in sort of a gimmicky way: “oh look how kewl, they look exactly like each other!” However, the line between novelty and fetishizing, and even dehumanizing, is terribly thin. It contributes to what is honestly a freak show mentality, which leads to poor writing, poor character development, and overall less than ideal portrayals of twins. Spoiler alerts for Teen Wolf Season 3 and Heroes Season 2 below. 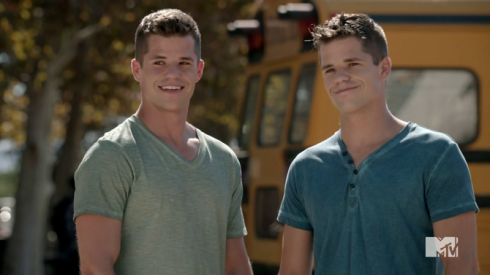 END_OF_DOCUMENT_TOKEN_TO_BE_REPLACED

From where I’m sitting, yesterday was a pretty good day. You might have been up all night with us watching the live feed from the Texas Senate house on SB5. “Emotional roller coaster” is probably a good way to describe that experience. If you slept in that morning, like I did, then you woke up to hear that Section 3 of the Defense of Marriage Act had been ruled unconstitutional. I’m not sure that this is exactly what victory looks like, but it’s certainly a step forward.

And with that in mind, I’d like to shout out some of the more compelling explorations of gay characters in comic books. Technically this is a Representation Roll Call, but it’s going to be slightly different format-wise. Since we’re on the subject of marriage, I’ll start with the wedding of Kyle Jinadu and Jean-Paul Baubier, whom you probably know as Northstar.

END_OF_DOCUMENT_TOKEN_TO_BE_REPLACED

I’m doing a lot of Netflix watching right now, and I came to an interesting revelation while watching and researching Gargoyles.

That’s not a guess. That’s the word of show creator Greg Weisman. In various interviews, Weisman admitted that, as the character was further developed, Lexington’s sexual orientation was realized.