There’s a certain level of adulthood you reach where you realize that filthy humor really is hilarious, and you’re not fooling anyone by pretending it isn’t. Unfortunately, this realization tends to come at a time in your life when you’ve also realized that things like misogyny and racism are both incredibly shitty and incredibly prevalent. You want sex jokes, but you don’t want rape jokes, and you want to acknowledge that butt stuff can be hilariously awkward, but you also get furious when people are homophobic. Where can you, an adult with a refined palate for filthy humor, turn to satisfy your deep, aching need for inclusive, witty garbage? Esteemed readers, consider Oglaf.

Yes, it is a competition.

Extremely NSFW images under the cut.

END_OF_DOCUMENT_TOKEN_TO_BE_REPLACED

Sex is an undeniable part of video games now. Arguably, it always has been (although we don’t talk about 1982’s Custer’s Revenge. Or I don’t). These days, it’s definitely a selling point for a game—see Bioware RPGs and The Witcher—and if not a selling point/something the player has control over, then it’s at least something that entices players to play when the protagonist gets down with their love interest. In this way, while sex is being portrayed, I wouldn’t exactly call it sex positivity. Recently, though, I came across a game that fulfills actual sex positivity by giving the player the full choice in their decisions when approaching a sexual encounter. None of that “if you choose not to have sex here, you lose the relationship” or “you can’t even skip this, so have fun boning lmao”. Today’s web crush approaches sexuality from the oft-overlooked aspect of consent, and I couldn’t be happier.

Note: while this post may not be NSFW, the game definitely is!

END_OF_DOCUMENT_TOKEN_TO_BE_REPLACED

To the surprise of probably no one, I enjoy some good smut every once in a while. Who am I kidding? I even like terrible smut every once in a while. However, despite my fluctuating tastes, one of the issues I think is important to cover, whether it’s through fandom or real life teaching, is sexual education. Today’s web crush isn’t about all those anatomical tidbits—although I do have one such site saved up for a future web crush. Instead, today I present to you a webcomic all about exploring your own sexuality with the aid of outside tools.

Now, I know as well as the next person that having a webcomic about sex and/or sex toys has the propensity to become much more about the hyper-sexualization of the act rather than a learning experience. However, comic artist and co-author of the weekly series Oh Joy, Sex Toy, Erika Moen, has taken a much more innovative and user-friendly approach to the sometimes risqué world of silicone and latex. What I mean by user-friendly is that even though the comic is rightfully rated 18+, readers aren’t going to be inundated with tasteless images of genitals or ads for whatever porn site is popular these days. As for the comic itself, a typical page consists of a review of a certain sex toy. With however many billions of toys that are currently for sale, it’s nice to have such a concise opinion—as well as an opinion that clearly comes from a place of goodwill rather than being paid off by such and such company.

END_OF_DOCUMENT_TOKEN_TO_BE_REPLACED

A horror movie from the early 80’s may not seem like a likely choice for a discussion of sexuality, but when that movie is A Nightmare on Elm Street 2: Freddy’s Revenge, it’s quite a different story. 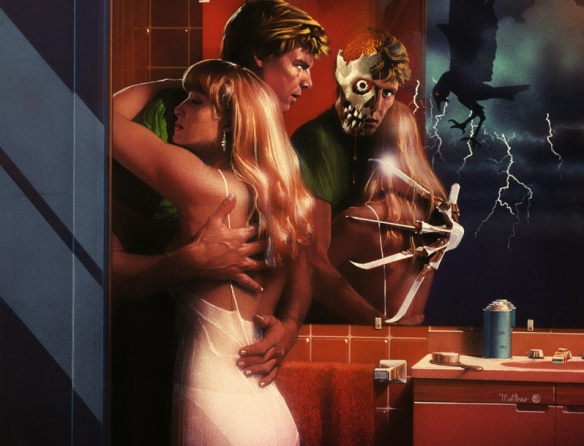 Sex is a common element in horror movies; in fact it’s usually the main indicator of who’s going to die (sexually active people) and who’s going to live (virgins, or at least monogamous partners) but very rarely have horror movies explicitly depicted anything other than heterosexual relationships until recently. There have been exceptions, such as the cult classic Sleepaway Camp, but the second Nightmare film is probably one of the most mainstream horror films to have included not only homosexual subtext but also blatant, in-your-face homosexual text. Today I will discuss three of the main characters from the film: Coach Schneider, the Phys. Ed. teacher; Jesse, the lead; and Grady, the friend.

(WARNING: Under the cut is a lengthy and mildly NSFW article)

END_OF_DOCUMENT_TOKEN_TO_BE_REPLACED

Tis the season of giving and all through the interwebs everyone is celebrating. Secret Santas, Big Bangs, giveaways: the list as bountiful as the creativity and charity required to participate in such things. In the fanfiction circuit though, the event that best encapsulates this is the tradition of the kink meme. Although not constrained to Christmas, the premise of these writing events is very similar to that of a secret Santa. All one has to do is leave a request about any couple, any type of fic and wait for someone to fill it. It’s all done anonymously so there’s little chance for being harassed for one’s preferences—if you want to ship Sailor Moon with Artemis, go right ahead—and despite anonymity usually being a calling card for being terrible to each other, I have never seen a more accepting group of people than those on kink memes. In fact, you’re more likely to find people that share your same ships and kinks than anything.

Today I come baring a kink meme from one of my favorite video game series, Borderlands. I don’t know about you guys, but I came out of that game shipping so many things it wasn’t even funny, but it’s literally impossible to find some of those ships online especially when there are a select few that get much of the screen time, so to speak. It was really by luck that I managed to run across this godsend of a literary gathering, but I had to take the plunge. I made my request.

In waiting for my request to get filled, I was pleased to find a bunch of other prompts already having been filled, and guess what? They’re all good. There’s a really adorable one that stars Axton and Maya, two of the main playable characters, where Maya is dressed up as another playable character, Zer0, trying to play a prank on Axton only to find him drunkenly confessing his love for her to the dude he thinks is his buddy. And there’s awkward haiku in that one too, so that’s a plus.

While there are many excellent fills, there are still many more prompts that need to be taken up. This post is not only a call for you, dear readers, to go read these amazing ficlets, but also to spur you into action. If you have any interest in Borderlands (or in any series because I’m sure there’s a kink meme for just about everything under the sun), consider filling someone’s request. It’ll make the original requester’s day and there’s no doubt you’ll please many more people as well. However, as it is a kink meme I feel like I must put the warning that many of the requests and fills are NSFW. However, it is possible that there will be fluffy, gen fills/requests as well. The kink memes are truly a gift in the fanfic world that keep on giving far past the holiday season, and who wouldn’t want to be a part of that?