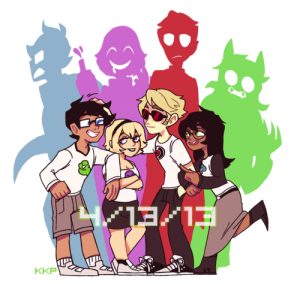 Happy belated 4/13, my fellow Homestucks. It’s hard to believe that Andrew Hussie’s epic about kids, space, and fucked-up universes has been around for five years now! Even harder to believe that this gigapause is still going… However, even though Hussie didn’t surprise us all with the final update on what would have been the most fitting day (there’s always next year), he did surprise us with an ambitious new comic venture. From what I’ve seen, the fandom is pretty excited for it, and with good reason.

What’s interesting about Paradox Space is that it’s not a spin-off of the original Homestuck comic per se, but could instead be seen as stories that travel alongside the main storyline, but never interact. …Well, instead of making this explanation more confusing than the source comic, I’ll let the man speak for himself.

Paradox Space will feature many short comic stories involving literally any characters and settings from Homestuck. Any point in canon could be visited and elaborated on, whether it’s backstory, some scenes that were skipped over or alluded to, funny hypothetical scenarios which have nothing to do with canon events, or exploring things that could have happened in canon through the “doomed timeline” mechanic that is a defining trait of Homestuck’s multiverse-continuum known as “paradox space”.

It’s a project that’s ambitious in its attempts to bring back the Homestuck fandom back to being a large, contributing collective once more—a project that allows the fandom some say in what potentially happened in this expansive universe we’ve all helped form with the characters we’ve grown to love or hate. Indeed, with Hussie’s continued assurances of allowing other people the reins of the site soon, Paradox Space will become a creator-sanctioned fanwork for the fans by the fans. And considering the size of Homestuck’s fandom, I’m not sure if I’ve ever seen a project that had the potential to blow up as largely as this one.