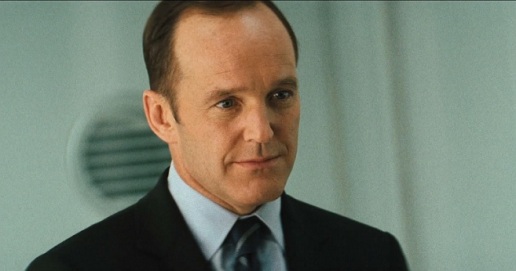 As presumably all of us know by now, Marvel’s Agents of S.H.I.E.L.D. started when The Powers That Be over at Marvel decided that Coulson hadn’t died at the end of The Avengers after all. Instead, he was resurrected through the judicious use of spoilery alien technology and given his own team of S.H.I.E.L.D. agents to boss around. The Avengers, and the rest of the world, were told that Coulson was definitely dead. As the series has continued, though, more and more people have been finding out that Coulson isn’t dead—even Lady Sif, Thor’s Asgard pal, who was sworn to secrecy about it. But the Marvel universe stubbornly continues to sidestep how the Avengers, and basically everyone in the films, has stayed in the dark for so long—a move that I find to be frustrating at best and fantastically poor writing at worst. It’s gotta be hard to figure out a plotline that spans a TV show and several movies, but surely someone at Marvel understands that not all of Coulson’s associates are going to take his so-called death at face value. Fortunately, we don’t have to wait around to see if Marvel will ever get it together—there’s already a great fanfic that deftly handles the emotional residue from both Coulson’s death and the fallout from his death.

END_OF_DOCUMENT_TOKEN_TO_BE_REPLACED

Well, this was going to be a Once Upon A Time review, but I’m still not caught up in that, so I’m turning my tender attentions to the polarizing first season of the Marvel Cinematic Universe’s first foray into television: Marvel’s Agents of S.H.I.E.L.D.

Agents of S.H.I.E.L.D. was so hyped by fans and Marvel alike that, in retrospect, I’m not surprised we were initially disappointed. Coming off the success of both The Avengers and Iron Man 3, I suppose we were in a place where the MCU delivering a terrible story seemed even less likely than DC casting a Wonder Woman. Oh, how times have changed.

Now that I’ve watched the whole season, I wouldn’t consider it irredeemably bad, although I was certainly tempted to drop it several times midseason. I just wish it had been shorter and tighter, and had gotten more interesting more quickly.

Spoilers for Captain America: The Winter Soldier and AoS’s Season 1 below the jump.