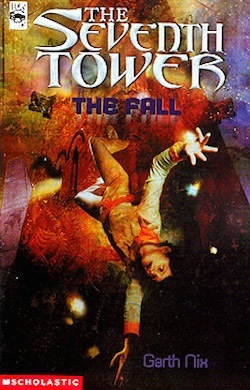 It’s been ages since the last time I read the Seventh Tower series by Garth Nix, but I’d been meaning to read it again, so this weekend I sat down and blasted through all six volumes. (At around 200 middle-gradey pages each, they’re not a heavy read.) I did remember enjoying the series when I read it the first time—probably way back around when it was published between 2000–2002—but very little else. All I remembered was that I liked them enough, so they’d survived several cullings of my ridiculously large book collection until such time as I could reread them and rejudge.

Having finally done just that, I am happy to report that the series is definitely an enjoyable read, although I probably won’t be holding onto them for another round a decade into the future. I was impressed to see that The Seventh Tower uses magic and worldbuilding in a fascinating way that allows for a deconstruction of privilege that feels organic to the story, while providing us with a strong female touchpoint character as well. Although, given that it was Garth Nix writing, I probably shouldn’t have been surprised. END_OF_DOCUMENT_TOKEN_TO_BE_REPLACED

Even though it might look it, this cover was not whitewashed.

Today’s book came highly recommended to me, so it pains me to say that in truth, I was more than a little disappointed by it. It’s like when your friend recommends a movie by telling you that it’s the most life-changing thing since Iron Man, so you go in expecting some Winter Soldier levels of amazingness, and instead you get Guardians of the Galaxy. I mean. My point is, I was really expecting it to be better, and I’m sad to say that it’s not. Illusions of Fate, by Kiersten White, is about the young Jessamin Olea, who’s studying at a school in Albion far from her native island country of Melei. By chance, she happens to meet Lord Finley Ackerly one night, and she’s immediately swept up in a world of intrigue, romance, and, of course, high treason.

This is a (too) fast-paced book that begins with a brilliant premise: what if magic was concentrated only in a few bloodlines and those people with magic were the leaders of many, if not all, countries? Suddenly being royalty or of royal descent doesn’t make you a useless figurehead—the aristocracy wield real power, and have all the privilege that’s associated with positions of power. To make the real-world comparisons even stronger, Melei is a country of dark-skinned people, and Albion is the Victorian England-esque country that has conquered and subjugated it. A fantasy novel with serious discussions of race and privilege through the lens of magic? It’s like Christmas came early for me. Unfortunately, though the premise is indeed amazing, the story itself is limited because White doesn’t fully engage with the world and with the (admittedly tough) themes she chose to utilize.

Spoilers for the whole book after the cut.

END_OF_DOCUMENT_TOKEN_TO_BE_REPLACED

Over the weekend, in a spectacular use of time that only goes to show how very impressive my decision-making skills are, I revisited a lot of my favorite Simon Pegg and Nick Frost collaborations. Eventually, through gratuitous use of Wikipedia, I happened upon a lesser-known film called Attack the Block, the 2011 directorial debut of Pegg and Frost collaborator Joe Cornish. Did I watch it? Yes, I did. Like Hot Fuzz and Shaun of the Dead, Attack the Block is in many ways a send-up of a popular genre (this time, alien invasions). It’s suspenseful, engaging, and hilarious. Most of all, it’s thought-provoking: it has a level of diversity that is rarely found in sci-fi, and uses its cast to make some pointed racial commentary.

Spoilers for Attack the Block below.

END_OF_DOCUMENT_TOKEN_TO_BE_REPLACED

Okay, bronies. As a fellow fan of My Little Pony and self-identified brony, and as someone who has sung the praises of this particular fandom on multiple occasions, I’m telling you we need to talk. And although I usually use the term ‘brony’ as a catch-all term, in this case I’m directing this at the ‘stereotypical’ straight, white, cis-male brony.

Let’s get something straight. I am a hundred percent supportive of your enjoyment of MLP. I think it’s awesome that you’re finding enjoyment outside your gender’s ‘assigned’ genres, and I encourage you to continue. I am sorry that sometimes people make fun of you for this. But for all you straight, white, cis-male bronies, outside of your pony-related choices of entertainment, you have ALL the privilege. By dint of your being straight, white, cis-guys, your life comes with the lowest difficulty setting.

This is important to remember. Privilege isn’t something to feel guilty about, because it’s not something you can change. But it is something to be aware of. And, being aware of this privilege, you need to make sure you do two things.

1) Do not ever appropriate the sufferings of actual minority groups. The phrase “I know what persecution is, because I am a brony” is not okay. Have you, as a brony, ever been denied legal rights or been considered less than human? Is bronydom a fundamental part of your genetic makeup that you can’t help? Has a religious establishment ever told you that you were going to hell for being a brony? (Or maybe it’s okay to know you’re a brony, but not okay to act on that bronydom?) Are you more likely to be targeted for discrimination by law enforcement, and do crimes committed against your group often go unreported or unprosecuted? Are there countries where you could be killed just for openly being a brony? Stop and think about what you’re saying. Being a brony is being part of a fandom, not part of an underprivileged minority group.

2) Actually make an effort to love and tolerate all people. Bronies seem to be constantly congratulating themselves for being open-minded enough to love something that is considered girly. Step back, bro(nie)s, and consider this: when you think you’re being accepting for deigning to like something girly, or attempt to recast MLP as somehow masculine, you’re actually reinforcing gender stereotypes, not breaking them down. You’re saying “usually girly things are dumb and stupid but, guys, look, this girly thing broke the mold and became awesome!” or “There are totally badass bits in here and therefore it’s manly and okay to like”, instead of “Gee, it sure is dumb to say what genders get to like what kinds of entertainment.”

The MLP fandom is, in general, an inclusive place to be. But these are some of many ongoing issues that need to be addressed. Take heed, my colts, and go forth having learned a (friendship) lesson.