We at Lady Geek Girl and Friends are ardent supporters of sex workers’ rights and sex positivity. Because of this, we find the portrayal of sex workers in musicals, well, troubling at best. As with many other forms of media, prostitution is shown as pretty much the lowest possible rung a woman can reach. Sometimes it’s used as a code word that means ‘she has a tragic backstory’; sometimes it’s used to show just how low she has been brought. Either way, if you’re a sex worker in a musical, odds are you’re gonna have a bad time.

Fantine from Les Miserables probably comes to mind first. Fantine, left with no other way, is forced to turn to prostitution. Her compatriots, who all seem to be hookers with hearts of gold sing raucously about their trade at first and seem to be pretty content with their lot, but as Fantine’s situation worsens, their lyrics as well as her lyrics get more and more tragic:

Got a lot of callers but they never stay for long

[Fantine] Come on, captain, you can wear your shoes

Easy money, lying on a bed,

don’t they know they’re making love to one already dead?

END_OF_DOCUMENT_TOKEN_TO_BE_REPLACED 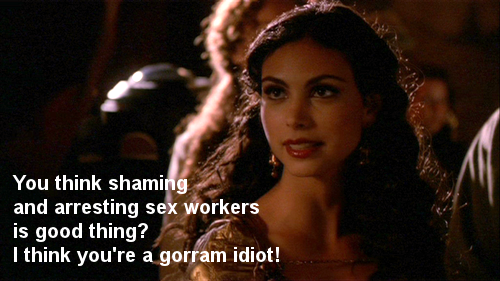 There are a couple topics within feminism that really polarize feminists. One of the biggest ones is sex workers and sex worker rights. There are a lot of issues that come to play here, such as sex trafficking (which is the forcing of women and men into sex work and is not the same as someone who chooses to be a sex worker), poverty, objectification of women, and much more. Still, the rights of sex workers has become a divisive issue for feminists around the world.

In the TV show Firefly and the movie Serenity (though to a lesser extent in Serenity) Inara Serra is one of the main characters and also a sex worker. In the world of Firefly, Inara is considered a Companion, which is similar to a very bastardized western appropriated version of a geisha. A Companion entertains, has tea ceremonies, attends parties/events with their clients, provides for their clients’ spiritual and emotional well-being as needed, and yes, has sex with their clients. Despite the general acceptance in society of Inara’s profession and even her standing as a member of an elite class of people, she often comes under fire for her profession as a sex worker.

So today, I am going to explore whether or not Joss Whedon, the writer of Firefly, intended Inara to be a positive example for the rights of sex workers or if he is attempting to show that sex workers are a symptom of an inherently problematic society.

END_OF_DOCUMENT_TOKEN_TO_BE_REPLACED

There is just something special about New Orleans, Louisiana. It’s a chaotic mix of French, Voodoo, the old South, and African influences. It’s almost magical. However, it is also historically known as a hotbed of crime, “loose morals,” and discovering the true definition of family. At least that’s how it appears in Ruta Sepetys’s Out of the Easy.

In the French Quarter in 1950, our main character, seventeen-year-old Josie Moraine, is the daughter of a prostitute. When she isn’t working at her beloved book store, Josie works the same brothel as her mother as a cleaner. Unsatisfied with the options offered to her, Josie uses both her book and street smarts to plan her way out of the Big Easy. However a peculiar death in the Quarter pulls Josie into the investigation. Josie is put through many trials and is caught between her Smith College dreams and her dark underworld reality. END_OF_DOCUMENT_TOKEN_TO_BE_REPLACED