Race against time… get it? Wordplay! Okay, for serious, my interest in writing a post about race in period pieces is something that branches directly off of my review of the Penny Dreadful premiere. Well, the first season of Penny Dreadful has come and gone, concluding last week, and while it was a great horror show, the iffy race issues from the premiere never went away. Speaking of race, the finale even had a few brief scenes with a one-shot Native American character, rounding out the variety of ethnic minorities barely acknowledged on the show. However, despite it being mentioned that this man had been forcibly acculturated by white, Christian schools and society (something that totally happened historically), he still had stereotypically long “Indian” hair and at one point, when the protagonist gets away from their clutches, the Native American’s companion actually says to him, “You’re Apache, track him!” #MagicIndianSkills 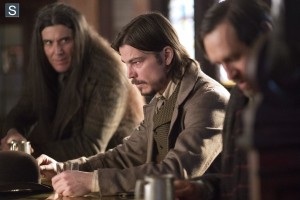 There was a “main” character of color in Sembene, an African transplant to Britain… and house servant to the explorer Sir Malcolm Murray. I use “main” in quotations because despite being featured in promotional materials, he was extremely underdeveloped. My prediction was that, being in an urban fantasy/horror show, Sembene would be a trope-y “Magical Negro”, but he wasn’t even developed/interesting enough to really qualify. Literally all he did was open doors and serve as an extra hand/muscle/blade in the fight scenes against spooky vampires. Frankly, I think it was rather misleading at best—and insulting at worst—to feature him so prominently in promotional materials and then not bother to develop him at all. “Ooh look,” producers could say, pointing at a poster for the show, “we’re so inclusive!” No, you do not get any bonus points just for having a character of color in the background of some scenes.

One of these characters is not like the others; i.e. he is really boring.