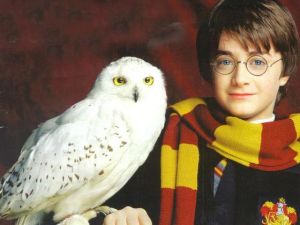 Harry Potter has indisputably become an important part of our modern mythos about witches, wizards, and magical know-how. We’ve discussed the series a lot on this blog, but as I was randomly thinking the other day, what exactly prompted Rowling’s choice in animal companions for her young magic users? Creatures like toads and cats have long since been staples of witchiness in the current pop media consciousness (although as far as cats go, Hermione’s fluffy ball of grump Crookshanks isn’t exactly the stereotype), and rats kind of fit in by virtue of so many people having an aversion to them. But owls? From where I stood, owls seemed like a random choice. Rowling has stated that she chose the creatures because they’re “traditionally associated with magic” and just because she likes them—both valid points—but in my pop culture experience, owls aren’t the go-to bird for shorthand magical implication. No, that honor goes to ravens. Still, this got me thinking further: what are the symbolic differences between owls and ravens when it comes to magic? Surprisingly, their purpose in folklore and their general symbolism are quite similar.